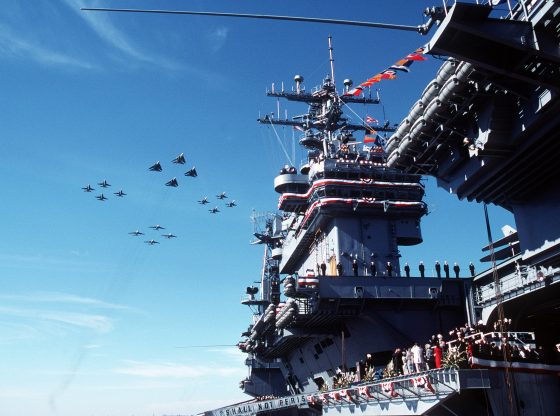 While it may not be rare to see two U.S. supercarriers side by side in port, it is rare to see them fully loaded with combat aircraft. Usually, in peacetime, the carrier’s aircraft will disperse and fly off to bases on land while the ship is in port.

But thanks to some photos posted online, we can see two of America’s most powerful warships, fully loaded, docked at Naval Air Station North Island, just across the bay from downtown San Diego.

The USS Carl Vinson (CVN-70) and USS Abraham Lincoln (CVN-72) can be seen together in these photos below.

Rare sight of two Supercarriers docked in San Diego with their decks packed with aircraft:https://t.co/So45GHYj36

As The Drive notes:

… the USS Carl Vinson is set to deploy at any time. It has been executing advanced drills for some time now, including being dispatched to Hawaii for training, but also to deter Russia’s own naval task force that came within a very short distance of the island state’s shores. CVN-70’s deployment will mark a number of firsts, including the first deployment of a Navy F-35C squadron and of the CMV-22 Osprey carrier onboard delivery (COD) aircraft.

The USS Abraham Lincoln also totes an F-35C squadron, but in its case, it is a Marine unit (VMFA-314, the Black Knights). The carrier returned home from a grueling deployment in the winter of 2020 before going through an extensive maintenance period at North Island. It appears to be preparing for another deployment which could occur very soon, or at least it will be available to do so.

There have been some highly interesting movements of American airpower in the Pacific as of late, as well as some puzzling strategic signaling with America’s undersea arsenal. This may be part of that, but it would come as a byproduct of the reality that two Pacific-based carriers could deploy immanently [sic], at least if need be.

It’s also worth noting that there is no American carrier strike group operating in the entire Indo-Pacific theater at this time, either, although that could and probably will change very soon.

As ADN recently reported, the HMS Queen Elizabeth (Big Lizzy) is in the region and the majority of the F-35Bs aboard her are from the U.S. Marine Corps. Big Lizzy also has a U.S. Navy Destroyer, and Royal Dutch Navy frigate as escorts.

It is possible that either the Carl Vinson or Lincoln will depart shortly to the Western Pacific to join the British flagship during this phase of her inaugural deployment. ADN