Home /Technology, US Military/Biden Has Now Armed the Taliban with Latest US Military Hardware – Including an Air Force 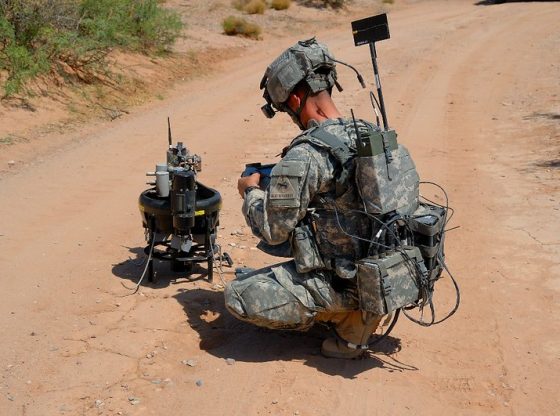 Soldiers from the Army’s Evaluation Task Force (AETF) have been training and testing equipment and capabilities that will be included in the Early Infantry Brigade Combat Team (EIBCT) Capability Package. / The US Army via (https://creativecommons.org/licenses/by/2.0/) Flickr

Of all the concerns about President Biden’s disastrous Afghan debacle, one of the most damning is how this profound policy failure has now armed a jihadist terrorist regime with billions of dollars’ worth of the latest U.S. military gear, including Humvees, (MaxxPro) MRAPs, Scan Eagle drones, and loads of Fords and Toyota vehicles.

As of Friday, Taliban fighters reportedly have captured armored vehicles, small surveillance drones, and several unflyable helicopters. But with the sudden fall of Kabul on Sunday, things could get far worse.

The Taliban may also be getting its own air force.

The #Taliban not only seized appr. a hundred US humvees and (MaxxPro) MRAPs at Kunduz airport, but also several US ScanEagle drones.
Billions of US tax payer $ going to Islamist extremists, thanks to the administration’s hasty withdrawal without a peace deal or follow up mission. pic.twitter.com/Fb5MTpdLKK

As Defense One noted:

The Afghan government also has 50 American-made MD-530 attack helicopters, which are armed with machine guns and rockets. Additionally, the Afghan Air Force flies American-made UH-60 Black Hawks and Russian-made Mi-17 helicopters, as well as C-130 and Cessna transports, and a small fleet of armed Cessnas.

But perhaps the most lethal, notes Defense One:

…are a small fleet of just over two dozen propeller-driven attack planes. These A-29 Super Tucanos were supplied to Afghan forces specifically so they can provide close-air support to their ground fighters. They can fire laser-guided and other types of bombs.

Most of these aircraft operate from just two air bases, according to Military Periscope, one in Kabul and the other in Kandahar. The Taliban took control of Kandahar on Friday, including the airfield.

And Kabul airport will likely soon fall to the Taliban as soon as the U.S. and international evacuation is complete. Defense One adds:

Over the last 20 years the U.S. has given the Afghan Air Force more than 130 aircraft. In July, the Defense Department said it was providing the Afghan Air Force more aircraft—including 35 Black Hawks and three A-29 Super Tucanos—in a sign of continued commitment to the Kabul government even as U.S. forces withdrew. Three of the Black Hawks were delivered last month.

What can be done? “We are always worried about U.S. equipment that could fall into an adversaries’ hands,” Pentagon Press Secretary John Kirby said Friday, reported Defense One. “What actions we might take to prevent that or to forestall it, I just simply won’t speculate about today.”

To prevent these planes from falling into enemy hands, the U.S. could still bomb the aircraft or airfields, but Kirby declined to say if this was still an option.

“I’m not going to speculate about … the destruction of property,” Kirby said. ADN

well when BRAIN ROT BIDEN is done he will have given the UNITED STATES lock stock and barrel to the TALIBAN, & ISIS we the AMERICAN PEOPLE HAVE BEEN SCREWED WITH OUT THE BENEFIT OF LUBE !

From Glenn to Joe WTF were you “feeling” because there was no thought put into this?

He was feeling the benefits of globalists voter fraud appointing him .

Does anyone else think this was done on purpose by Joe Biden puppet master Obama, Joe Biden. and many more working in congress. The only other way for something like this to happen would be every one of them working in congress are really stupid and dumb to the max and need to be removed from congress ASAP.

Either Biden and his cabinet have a combined IQ of 12, or Y-E-S it was planned!

There are no mistakes, globalists planned this out well .

Anyone have a really good answer why our A-10’s and AC-130’s aren’t out right now turning all those aircraft into scrap metal?

Hey sleepy Joe Biden, Schmuck in Chief, are the B 52 bombers going to destroy the abandoned military equipment on Sept. 1 2021???

How is this not aiding the enemy??? This is nothing but TREASON!!! an Impeachable offense … IMPEACH AND EXECUTE!!!!!

globalists and their puppet barry soetoro and his husband big MIKE appointed all the correct criminals to the correct positions to protect all their criminals .

How many Tactical Nukes?

Isn’t turning over Billions of Dollars of Weapons and other supplies to the Enemy considered “Giving Aid and Comfort to the Enemy?” This is the very definition of Traitor?

Not according to the libby snow flake dictionary .

Basement Joe and the Demonrats stole the election with their illegals, counting votes more than once and other crooked means. He is a cognitively impaired puppet. In just six months, his team of miscreants have pushed us ever closer to socialism!

LISTEN UP…PREZ TRUMP Needs to TAKE OVER. The BLESSING of GOD is with HIM. The SAME BLESSING that was with KING DAVID. THERE was a REASON AMERICA’S FOREFATHERS Put GOD First. From SamuraiQueen. 😄😄😄

god blesses globalists and their puppets; chester biden and the pentagon and the fbi CRIMINAL organisation and media like he blesses altar boy raping priests .

China Loves This !!! O’Biden is in China’s Pocket !!! China has recently offered support to the Taliban !!!! Just Connect The Dots to see why and how all this Afghanistan Crisis Evolved !!!!!
Wake Up America, We Are In Very, Very Serious and Dire Danger “From Within” and From China, O’Biden’s Ally !!!!

China is nothing compared to the globalists that are running/ruining the world .

globalist puppet, demonrat criminal party probably already trained their taliban to use the presents they gave their taliban

It’s not only the Taliban that will have all our strategic equipment, it WILL be shared with Iran and others not friendly with The USA. Biden should be tried for nothing less than TREASON, along with is administration. OUR GOVERNMENT IS SOOO SICK AND CORRUPT.

This is just beyond disgusting. This was planned by obama and his hacks along with the joint chiefs, intel agencies, the pentagon, and the hiden administration. Shame on all of you. I hope karma finds you all and punishes you accordingly.

Another Biden screw up!!! Who the hell is he working for?? Leaving so much military equipment to the enemy, OUR military equipment!! I think he and his party should be impeached for such a stupid maneuver!! Was it stupid or planned??