Worse Than Saigon: Helicopters Evacuating Americans from Embassy After Biden Said It Would Never Happen

Home /Analysis/Worse Than Saigon: Helicopters Evacuating Americans from Embassy After Biden Said It Would Never Happen

Worse Than Saigon: Helicopters Evacuating Americans from Embassy After Biden Said It Would Never Happen 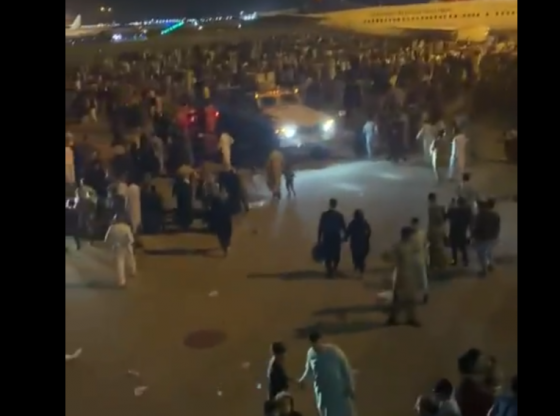 Chaotic scenes at Kabul International Airport. No security. None. / Photo by Saad Mohseni

ANALYSIS- On July 12th I wrote that President Biden would soon regret saying in response to reporters questions, that there were no parallels “whatsoever” to Vietnam in 1975, adding: “There’s going to be no circumstance for you to see people being lifted off the roof of an embassy of the United States from Afghanistan.”

And sure enough, here we are a month later, and helicopters are indeed air lifting a lot of people from the now Taliban-occupied former U.S. embassy in Kabul.

And it is both eerily similar, and far worse, than the Saigon parallel.

PHOTO 1: US diplomat evacuate US from embassy via helicopter as the #Taliban enter #Kabul from all sides. #Afghanistan (2021)

PHOTO 2: US diplomat evacuate US from embassy via helicopter as the PAVN & Viet Cong capture of Saigon, Vietnam (1975) pic.twitter.com/YamWmzjOay

Never trust a friend who leaves you saying he’ll be back – Old Vietnamese saying. pic.twitter.com/AIItm8aReA

Another Saigon moment: chaotic scenes at Kabul International Airport. No security. None. pic.twitter.com/6BuXqBTHWk

On July 8 in response to a question from a reporter who asked Biden if he saw “parallels between this withdrawal and what happened in Vietnam,” noting that “some Vietnamese veterans see echoes of their experience in this withdrawal in Afghanistan,” Biden specifically promised that Kabul would not become the new Saigon, and that the world would not see American helicopters rescuing American workers from the U.S. Embassy in Kabul.

The Taliban is not the south— the North Vietnamese army. They’re not remotely comparable in terms of capability. There’s going to be no circumstance where you see people being lifted off the roof of the embassy of the United States from Afghanistan. It is not at all comparable. ADN

But no mean tweets from 1600 Pennsylvania Ave, so all is well.

Well, mission accomplished. Don’t see anything about election fraud in the news.

I had a strange dream the other night that Biden was being lifted from the roof of the White House in the same helicopter.

The same failed swamp rats who thought ISIS was the “JV team” says the Taliban is not “the North Vietnamese Army.” Will some people EVER wake up and rid us of this TRASH?

The only thing missing from this story is helicopters ditching at sea with families on board.

Give it a little more time.

Presididn’t (Go to the Border) Joe Biden again undoing another Trump plan to withdraw from Afghanistan in an orderly and peaceful fashion! A panic stricken bug out does not look like a sophisticated exit at all!

I guess the flight attendant stopped asking for a boarding pass. I wonder where Mark Milley is. Perhaps boarding passes are his responsibility.

Milley is laying low like the rest of them and Harris is at the bottom of the pile. and by the way don’t disturb Joe, he’s taking a nap, Jill will take messages.

Kabul Jill has asked Hanoi Jane to come celebrate at the White House.

Saigon and Kabul are no different the latter being worst.

YES. Surely Mr. Biden is old enough to remember the tragedy of Saigon, when anti-Communist Vietnamese were willing to cling to the rails outside a helicopter and risk death by falling from a great height over falling into Communist hands.

LISTEN UP….The U.S. MILITARY Kept the TERRORISTS at BAY for 20YRS. SOME MILITARY Needed to STAY in AFGHA N as a BARRICADE. GOD Can Bring the GOOD Out of the EVIL SATAN Does. ALL is NOT LOST. From SamuraiQueen. 😄😄😄

PLEASE watch this movie and ask friends to watch also.13:hours:The secret soldiers of Bengahazi.This makes everything real.Draw your own conclusions