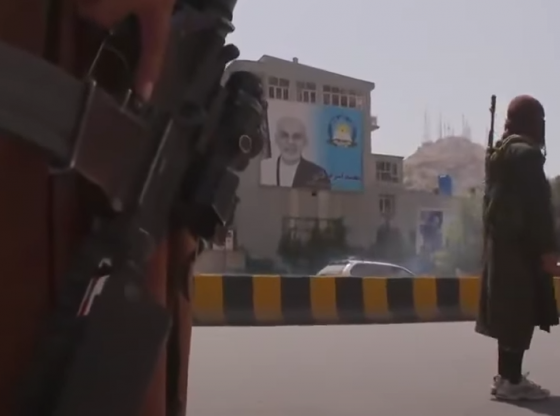 Taliban Soldiers Patrol the Streets / Screenshot via the BBC on YouTube

ANALYSIS – This is Part 2 of a Three-Part piece. After hiding out at Camp David for three days as his self-created Afghan disaster unfolded, we have Biden’s SECOND Afghanistan ‘malarky’ speech, which he gave without allowing for any questions before retreating into the White House.

4.) “I cannot and I will not ask our troops to fight on endlessly in another country’s civil war” and “American troops cannot and should not be fighting in a war and dying in a war that Afghan forces are not willing to fight for themselves.”

President Biden repeatedly promised upon taking office that American leadership was back. But global leadership makes somebody else’s problems also your problems. American troops remain stationed in postwar Germany and postwar Japan today, not to mention South Korea and Italy and many other countries, all in greater numbers than were still in Afghanistan before this pullout. Our troops were not “fight[ing] on endlessly” in Afghanistan, they were providing an invaluable stabilizing element keeping the Taliban at bay.

And Americans were by and large no longer shedding blood for the U.S. effort in Afghanistan. Florida reported more COVID deaths on Saturday than killed in action in Afghanistan since 2014.

5.)  “The terrorist threat has metastasized well beyond Afghanistan.”

It is true that, as Biden says, “these threats warrant our attention and our resources.” But it is misleading of Biden to imply that the threat hasn’t also metastasized in Afghanistan.

Again, we have now made the Taliban the strongest it has ever been, due to the much greater equipment and weapons we left behind, in addition to the fine fighters we trained whom the Taliban will give the “choice” of entering the ranks of the Taliban military or watching the deaths of their loved ones.

Osama bin Laden is dead, but al Qaeda still exists and may well find Afghanistan under the restored Taliban welcoming.ADN

Paul:
What has been brought to light recently. Why has the NSA allowed all of this to happen? NOTHING happens without them knowing it. This Taliban over run would have been certainly planned and executed over SEVERAL MONTHS! The US could stop the flow from Pakistan “where the entire Taliban is coming from”, blocking roads and the entire SUPPORT the US GIVES Pakistan enforcing the will of the US on the Taliban to get our people out! Just WHO is in charge, and why would they want this outcome? It is CERTAINLY not Biden, who I am absolutely NO FAN OF!

I doubt we’ve heard the names of WHO is in charge. Or if we have, their true identites have been cloaked. Their agenda is simple – destroy over 90% of the population by setting them against one another, and enslave the rest for their own use. Specific paths to that outcome (pandemic, jab, terrorism, etc.) are trivial as long as it serves their endgame.

Biddey is nothing but a deplorable lousy democrat PUNK

Why are you being so kind to Biden? He is a traitor. He has used his political power to enrich himself and his Clan of Grifters. He uses his drug addled son as bagman and money launderer. He is the BIG GUY who gets his cuts for play for pay. Now that his brains are leaking out through his mouth–he is desperately fighting to hang onto power. In the meantime he is taking down the USA and her allies with his nonstrategic planning. In other words–He is a walking catastrophe.

And I just saw a platoon commander say in an interview 10 years ago that Afghan soldiers were like a class of kindergartners. You had to tell them something 10 times. Another said that if drug tests were taken, 75% would be drummed out. On payday, they would disappear for days. Just another angle on this whole shitty 20 year epic. It should have been called the The Idiot and the Oddity.

Murph, one confounding factor is that they most likely were never on our side and half-heartedly supported our goals. Their foremost loyalty, whether ingrained, brainwashed or genetic, remains to their Muslim brothers. We would do well to remember that the Afghan trust in the West has never existed throughout history and they probably have not even a cognitive tree for the concept of a democratic republic.

Does anlyone actually listen to Biden speak? I surely don’t ! I listened once and that was enough. Never will listen again as he has nothing to say that I want to hear.

Biden is in charge of NOTHING, he is the DUNCE IN THE CELLAR