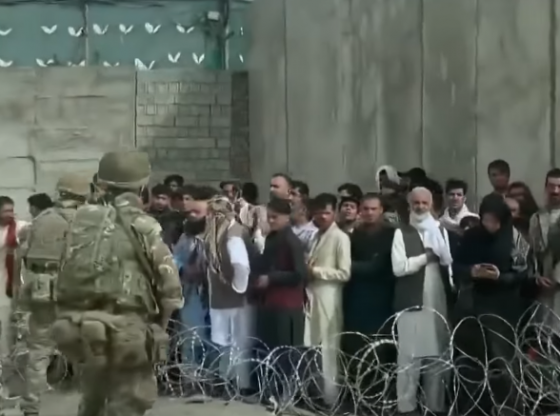 ANALYSIS – This is Part 3 of a Three-Part piece. After hiding out at Camp David for three days as his self-created Afghan disaster unfolded, we have Biden’s SECOND Afghanistan ‘malarky’ speech, which he gave without allowing for any questions before retreating into the White House.

6.) “China and Russia would love nothing more than the United States to continue to funnel billions of dollars in resources and attention into stabilizing Afghanistan indefinitely.”

This claim is simply wrong. Setting aside the American humiliation, which the Chinese and Russian regimes are evidently enjoying, the United States just voluntarily gave up the only military base it had in a country that neighbors China, in addition to neighboring Iran and being in close proximity to the Asian side of Russia—a major asset for potential counterterrorism operations, espionage against great power adversaries, and military operations. Add to this how our withdrawal damages our relationship with India, an important Quad member.

7.) “I’ve learned the hard way that there was never a good time to withdraw U.S. forces.”

Maybe there was never a “good” time for withdrawing U.S. forces, but there certainly were less bad times, as Frederick W. Kagan devastatingly points out in the New York Times:

8.) “I inherited a deal that President Trump negotiated with the Taliban.”

But Biden was not bound by that deal. First, the Taliban itself had violated the agreement since its inception by cooperating with al Qaeda and assaulting the Afghan military.

Second, Biden himself had disregarded aspects of Trump’s deal with the Taliban. The Trump-Taliban deal would have had the United States out of the country by May; it’s August, and we have not finished our withdrawal.

Third, and most importantly, the idea that Biden was somehow bound by this one terrible Trump agreement with the Taliban is absurd on its face.

Virtually everything about Biden’s Afghanistan policy has been grossly and disastrously mishandled – from the decision to withdraw against all militray advice hastily and recklessly, without coordination, proper planning, or consultation with our NATO allies, to the deceptive justifications, and ongoing obliviousness. Biden’s Afghanistan catastrophe has been one giant avoidable and tragic CF. AND

Is Biden deliberately lying to cover up how inept this withdrawl from Afghanistan is, or is he intentionally being given bad information, so the Democrats can invoke the 25th amendment and install Kamela Harris?…….I “get it” that Biden isn’t the sharpest knife in the dishwasher any more, but these lies are so outrageous, and false, if he knew what was going on, in truth, you’d think even he wouldn’t make these claims…Almost seems like he’s being set up to fail and look really bad.

Hidenbiden,in his mental capacity, possibly just allowed Americans and allies to be slaughtered by the Taliban, if this happens,the sockpuppet, needs to be executed for treason,along with all his minions.

Seems to me, our Imbecile-in-Chief has become wounded prey. He has no plan, not even notions of a plan. He has no rationale. He cannot verbalize his intentions. He cannot read what his handlers write for him. An Australian commentator suggested he turn his teleprompter around and let us read it for ourselves.

Colossal numbers never before seen this early in an administration, now object to his leadership and threaten impeachment if he doesn’t resign. His party not only orchestrated a fraudulent election. It threw him under a bulldozer. Most of us out here in radio land cannot even imagine the next democrat step.

He has left Americans behind ,since Biden can’t get them out others countries have sent trips back into 2Afghanistan to 3air lift them out .when Biden wake up from his nap 3it will be all over .

Don’t necessarily agree that the Trump agreement was “terrible”. 1. Trump could be swayed by changes on the ground. 2. Trump had laid down conditions to be met by the Taliban. To believe that Trump would not have reacted to transgressions is fantasy – and the Taliban realized this. 3. Biden eliminated the Trump Admin. program to adjust to dangerous circumstances that arose during the evacuation. 4. Do you really believe that Trump/Pompeo, et, all, would have given up Bagram as Biden did before the completion of the evacuation? 5. Do you believe that the Taliban advance in recent months would not have triggered a reaction from the Trump admin? 6. Biden’s communication with both the allies and with the Afghan military on the evac. was abysmal. 7. Leaving behind all that hardware was brainless – as most of Biden’s withdrawal was and is.

This Democratic Administration, If you can call it an Administration. Have now armed the Taliban with some of the most advanced. Weapons that our Servicemen and Women have. The only difference now is that our hands are bound by the Geneva convention, Terrorists are just bound the terrorize and destroy, not just other nations but people of they’re own race who disagree with they’re Ideology and rules, they enslave women and abuse children, This is the type of people we were fighting against. Now how the Afghani government fooled us into believing they had 300,000 trained troops that we were paying. Ready to protect they’re country We found out in real short order just how many they really had But we were also supplying weapons,ammunition, and other supplies based on those numbers, My question is how come the CIA and Commanders who were supposed to have trained these people did not know they real numbers? Who has been getting all the money and supplies sent for them?

I just hope that we do not find out later that Biden cut a deal with the Taliban for them to sell the weaponry Biden left them and give him or Hunter his cut of the proceeds because that is in a way what Biden and Son have been doing for a long time. It is unforgiveable that Austin/Milley did not really act as Generals and raise their voices and tell Joe no way Now how–Here is the proper way to withdraw–The Military WAY. but they did not–they just let it happen fully knowing what the end result would be.. Austin and Milley are weaklings with their trannies and CRT.