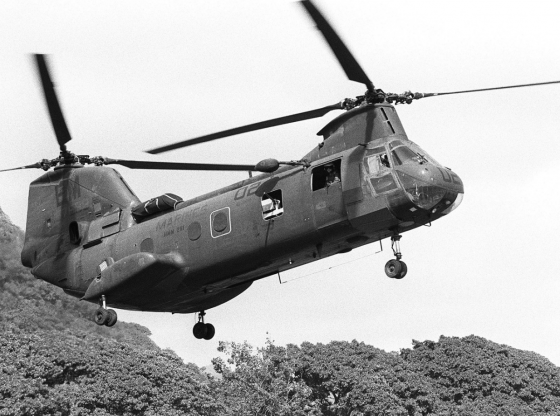 President Biden’s tragically avoidable ‘Saigon Moment’ in Afghanistan may be a closer parallel than initially thought. Not only were the images of helicopters flying from U.S. embassies eerily similar in both crisis evacuations, but it turns out that the same exact helicopters may have been used in 1975 and now in Kabul.

While the most iconic photo from Saigon in 1975 is that of a civilian UH-1 Huey sitting on top of the US embassy taking on embassy staff, quite a few dual rotor Ch-46 ‘Phrogs’ (officially known as ‘Sea Knights’) – flying from the deck of the USS Hancock – were also used during  Operation Frequent Wind, the U.S. mission to rescue as many people as possible from Saigon as communist North Vietnamese troops engulfed the city.

During my time in the Marines, I flew on many Phrogs, especially when I was with the 11th Marine Expeditionary Unit – Special Operations Capable (MEU-SOC’s) helicopter assault company. I even had a minor crash landing in one in South Korea.

And some keen observers noted that at least one of the helicopters seen flying over Kabul could match one seen in Vietnam-era photos of the Saigon evacuation. These two-tone blue and white CH-46Es belong to the  State Department’s Air Wing, and  according to The Drive:

The Bureau Number (BuNo), a serial number applied to all aircraft that the U.S. Navy purchases regardless of their ultimate recipient, on one of the helicopters in the photo could read 154038, matching a CH-46E that was indeed transferred to the State Department as N38TU in 2012. If accurate, at least one Sea Knight may have participated in both historic evacuations.

First, a Getty image of Dep’t of State Air Wing CH-46 N38TU (BuNo 154038) over Kabul evacuating the US Embassy today. Second, what appears to be 154038 on the deck of USS Hancock during Frequent Wind, the evacuation of Saigon. The more things change, the more they stay the same. pic.twitter.com/EqVMxxqFZw

Nicknamed the “Phrog”(or Battle Phrog) by a Marine Corps major due to its frog-like appearance from the front, the CH-46 Sea Knight was originally procured by the Marines in 1961. Exactly why Marines used the “ph” has apparently been lost to time. Whatever the origins of the spelling, the “Phrog” moniker is apt in more than one regard…

During Operation Frequent Wind, 71 helicopters flew over 650 sorties between Saigon and elements of the Seventh Fleet off shore. The high operational tempo led to some accidents, with a CH-46 flown by Captain William Nystul and First Lieutenant Michael Shea crashing into the sea after a night mission, killing both men. The enlisted crew survived the accident, but the bodies of the two pilots were never found…

Ultimately, the CH-46 played a pivotal role in saving the lives of more than 7,800 people in the helicopter airlift portion of the closing chapter of the Vietnam War.

And now, it seems, similar helicopters, or maybe even some of the same ones, are evacuating Americans and allies from the current disaster in Kabul, Afghanistan. ADN

The news said they left about 150 Blackhawks for the Taliban….sure maybe not flying, broke down or whatever. BUT I bet they can get a few dozen of that 150 or so flying. I’m sure China or Russia would be willing to give them hand working on them.

Donald Nicholas
Reply to  u know

It’s like nobody knew what was happening. There’s no excuse for leaving so much equipment. On a better note the Joint Chiefs are assuring that our future leaders will be well schooled in CRT and Marxism. The Biden goals are certainly lofty.

It is some very special person “getting this thing done“.

WinstonRomeo
Reply to  u know

This is why all this abandoned equipment and weaponry must be destroyed before it’s removed to Pakistan or Iran.

That doesn’t just happen. It had to be a complete accident given the sh*t show we witnessed here.

The irony of this is, of course, lost on this so-called Administration. Lefties must be happy at this debacle.

What a dam nightmare, created by sockpuppet,dementia,joe,hidenbiden, and walks away and dosen’t say a dam thing, pathetic idiot, has no idea what he and his minions have done .God save us, because biden will get us nuked.

LISTEN UP…PREZ BIDEN Needs to MAKE the RIGHT DECISIONS with the CRISIS in AFGHAN and at AMERICAS BORDER. HE Needs a GOOD TEAM of ADVISORS. HIS DECISIONS Makes the Difference Between the MEN and the BOYS. LIFE is Like a CHESS GAME..YOU Have to MAKE the RIGHT MOVES to Get a CHECKMATE. ALL is NOT LOST….THERE is HOPE Yet. From SamuraiQueen. 😄😄😄

According to sleepy Joe, he has made the right decisions and with his cream of the crop subordinates.

You are oh so right, Sarge! The smug arrogance of these lefties defies belief. I know this Afghan FUBAR appalls you, because I know from my Dad the Marine that the Army may leave a comrade behind, but not the Marines. I hope this Marine battle ethic has not changed, whatever Biden’s misdeeds.

Insubordination is the correct term.

Please watch this movie and you will see how hard it is to evacuate an embassy in a foreign country and what they are going through. Name of movie is .13 hours:The secret soldiers of Benghazi

well it worked the last time. Hopefully we will do to our enemies this coming big war what we did to the Soviet Union . But right now we need to worry about The Art of War undermining going on in our nation Stolen elections and communism raising it’s ugly head with equity and critical race theory infiltrating our schools which parents need to be on.

Biden isn’t qualified to run a Lemonade stand let alone an exit strategy from Afghanistan. Where’s the dang Secretary of State in all of this? Total incompetence. Totally worthless administration.

A tribute to America’s aircraft mechanics

The CH-46 Sea Knight helicopter has achieved icon status and I was proud to see it was part of Marine Medium Helicopter Squadron 261. I served with HMRL-261 in Okinawa 1960, a squadron that became MMH-261 the next year. In my time, our transport was the HUS-1 Sea Horse made by Sikorsky.

A couple of Buf’s and some CBU’s would drastically reduce the amount of equipment the Taliban has seized!

We should be sending stinger missles to take these out!