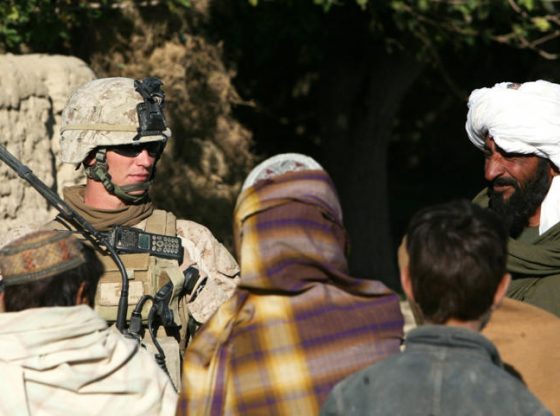 Cpl. Bradley Penn, a section leader with India Company, 3rd Battalion, 4th Marine Regiment, talks to members of the village of Kace Satar, Afghanistan, during a patrol of the village Nov. 11. / Photo via the Marines

These were first Marines to deploy to Kabul as Taliban advanced in Afghanistan.

As US exits Afghanistan, China’s military conducts assault drills in seas near Taiwan.

Congress poised to grill Biden officials on messy Afghanistan exit. The Biden administration is about to face a grilling from both the House and Senate over the bungled U.S. exit from Afghanistan, where the Taliban’s quick advances caught key officials off guard.

President Biden chose the worst options in Afghanistan. You don’t need to be a brilliant geopolitical strategist to understand that the United States should be the best friend – and the worst enemy – any nation could have. Following the events of recent days, the U.S. will be perceived differently: “harmless as an enemy but treacherous as a friend.”

The US is hostage to the Taliban. Pentagon officials admit they don’t have enough troops to protect the Kabul airport and assist Americans and Afghans trying to get to the airport.

Here’s all the US military equipment that likely ended up in Taliban hands. The Biden administration admitted on Tuesday that the Taliban had captured a significant amount of U.S. military equipment originally supplied to Afghan security forces during the militants’ blitzkrieg on Kabul in recent weeks — and the U.S. doesn’t know exactly how much American gear they’ve lost to terrorist hands.

Biden: Troops will stay in Afghanistan to evacuate Americans. Up to 15,000 Americans remain in Afghanistan after the Taliban took full control of the nation last weekend.

No deadline should stand in the way of the evacuating U.S. citizens and Afghan partners. President Biden must be held accountable for failing to prepare an orderly evacuation of vulnerable civilians as he withdrew U.S. troops from Afghanistan.

Trump’s pledge to exit Afghanistan was a ruse, his final SecDef says. Chris Miller now says talk of a full withdrawal was a “play” to convince a Taliban-led government to keep U.S. counterterrorism forces.

Taliban fighters have created a ‘gauntlet’ outside Kabul’s airport making escape nearly impossible. U.S. officials claim the Taliban has offered safe passage to Afghans trying to get out of the country, but a group of Taliban fighters are reportedly preventing almost everyone from entering Kabul’s international airport.

Aid groups warn of possible refugee crisis in Afghanistan far beyond Western evacuation plans. As the Biden administration surges more evacuation personnel to Kabul’s international airport, aid groups are warning that a much larger refugee crisis looms because of the displacement of half a million Afghans in the past eight months of fighting between the Taliban and Afghan National Army.

First resistance to Taliban rule tests Afghanistan’s uncertain future. While the militants appear firmly in control, some prominent figures vowed to continue resistance as protests erupted in two cities and millions of Afghans parsed clues about the Taliban’s intentions.

The mujahideen resistance to the Taliban begins now. But we need help. In 1998, when I was 9 years old, my father, the mujahideen commander Ahmad Shah Massoud, gathered his soldiers in a cave in the Panjshir Valley of northern Afghanistan.

NORTHCOM presses case for new approach to homeland defense. The head of U.S. Northern Command says the United States needs to modernize its communication and warning systems for homeland defense to ensure leaders have more time and better options before launching a kinetic response to potential threats.

As US exits Afghanistan, China’s military conducts assault drills in seas near Taiwan. China has stepped up military exercises around self-ruled Taiwan, which it considers its own territory.

Counterpoint: Taiwan wants Paladins. Congress should say no. Taipei’s only hope for an effective defense is not armor but asymmetry.

These Marines will spend the next 2 years testing the Corps’ new ship-sinking missile. The missiles traveled “in excess of 100 nautical miles.” And not in a straight line, either.

These were first Marines to deploy to Kabul as Taliban advanced in Afghanistan. Roughly 1,000 Marines with the battalion landing team deployed from the 24th MEU to Kabul, Afghanistan.

Top Obama Diplomat in 2010: Biden Said ‘F**k that About US Obligation to Afghans – ‘We did it in Vietnam, Nixon and Kissinger got away with it.’
FRIDAY PDB – AFGHAN CRISIS: UK and France Rescues Its Citizens While Biden Keeps US Troops at Airport, Biden’s Sycophants Enabled Disaster, Russia Gains Influence as US Image Crumbles, US Troops Still in Kosovo 20 Years Later, 200 Marines Deploy to Haiti

Another smokescreen to bring Islam to America.
ISLAM IS NOT COMPATIBLE WITH CHRISTIANITY!

America is set up to tolerate all religions, however Islam is more than a religion: it is also a system of social engineering and an imperative of THEOCRATIC military conquest. Islam is not compatible with the US CONSTITUTION!!

LISTEN UP…The TERRORISTS have WEAKNESSES like the CHINESE GOVT..RUSSIA…N. KOREA…IRAN.Even the DEMOCRATS. TIME will REVEAL Their WEAKNESSES. GOD has the CHECKMATE…ROYAL FLUSH..TOUCHDOWN…GOLD MEDAL. TRUST GOD. GOD is the RULER of MEN. HE has the LAST WORD. From SamuraiQueen. 😄😄😄

Perhaps, he chose this time and means for the ends desired to the means for agendas Biden’s master democrat/rinos/marxist/islamist/crime cartels have planned: just a thought.

Mr. Biden has been incompetent from Inauguration Day! Sleepy Joe is dealing with a moderate form of Dementia and should have been removed from office before this debacle! Whoever or whatever is pulling the puppet strings should be gone with him as well..His advisors have truly made tragic mistakes with this one, and America will suffer the consequences because of it. We the people have had enough Joe, Resign and leave Washington in disgrace for what you have done.

Hidenbiden,installed by the deep state, the sockpuppet needs to be removed from office, after his total train wreck in Afghanistan. He has caused a disaster in the making,of 15,000 American hostages, and 60,000 allies that are trapped by the taliban, and can’t get to the airport. This embarrassment, of this pretending president, needs to go by whatever means he is an unfit,mentally =,disturberd,unhinged,nincompoop that has no idea what he is doing.