ANALYSIS – The day after the Capitol Riot on January 6, which I personally witnessed as a risk advisor to a foreign TV news crew, I wrote that the couple of hundred violent rioters acted outrageously, and criminally, just like the violent BLM rioters throughout the summer of 2020, but the incident on January 6 was still a riot, not a ‘coup’ or ‘insurrection’.

I have been adamant about that position ever since.

These facts haven’t kept the dishonest partisans and compliant establishment media from repeating the false, politically motivated mantra that it was an “insurrection,” and that the few hundred unarmed rioters were “insurrectionists.”

Well, now, according to Reuters, after months of intensive investigation, the FBI has concluded the same thing as I did the day after January 6: there was NO insurrection.

This is a MAJOR DEVELOPMENT that must be disseminated widely. These FBI findings destroy the “insurrection” lie.

Senior lawmakers have been briefed on the results of the investigation and find them credible, a Democratic congressional source told Reuters.

The FBI has found scant evidence that the Jan. 6 attack on the U.S. Capitol was the result of an organized plot to overturn the presidential election result, according to four current and former law enforcement officials.

Though federal officials have arrested more than 570 alleged participants, the FBI at this point believes the violence was not centrally coordinated by far-right groups or prominent supporters of then-President Donald Trump, according to the sources, who have been either directly involved in or briefed regularly on the wide-ranging investigations.

“Ninety to ninety-five percent of these are one-off cases,” said a former senior law enforcement official with knowledge of the investigation. “Then you have five percent, maybe, of these militia groups that were more closely organized. But there was no grand scheme with Roger Stone and Alex Jones and all of these people to storm the Capitol and take hostages.”

Stone, a veteran Republican operative and self-described “dirty trickster”, and Jones, founder of a conspiracy-driven radio show and webcast, are both allies of Trump and had been involved in pro-Trump events in Washington on Jan. 5, the day before the riot.

FBI investigators did find that cells of protesters, including followers of the far-right Oath Keepers and Proud Boys groups, had aimed to break into the Capitol. But they found no evidence that the groups had serious plans about what to do if they made it inside, the sources said.

While federal prosecutors have filed conspiracy charges against 40 of those defendants, alleging that they engaged in some degree of planning before the attack, so far they have steered clear of more serious charges that had been initially discussed by prosecutors, such as seditious conspiracy or racketeering.

Reuters added that the “FBI’s assessment could prove relevant for a congressional investigation [sic ‘witch hunt’] that also aims to determine how that day’s events were organized and by whom.”

I think most of us knew that on 1/6. Coulda’ saved a few million dollars and 7 months of ‘foot-work’.

Yes! You are absolutely right! But this whole orchestrated rebellion by Speaker Pelosi was her last try to Impeach DJT! She was emotionally involved and could not let this go!

Creating this whole scenario proves how much HATRED Pelosi has for President Trump — she would do anything — and I mean ANYTHING — to KEEP DJT FROM BEING PRESIDENT OF THE U.S.!! She is a woman “possessed” and has lost all common sense! Hopefully she will retire or step down soon OR perhaps something more revealing will happen and show America just how wicked she really is! Hopefully the last will happen, because Nancy hasn’t been a good Speaker of the House for years, it’s time she goes!

She is down-right evil!!

LISTEN UP..THANKYOU PAUL CRESPO for Your COMMENTS. HOW Come the UNARMED PATRIOTS are STILL Sitti ng in JAIL???? ASHLI BABBITT got NO JUSTICE. BLM and ANTIFA Continue to INJURE and KILL PEOPLE. ALL AMERICANS Need to Be RESCUED from AFGHAN. Do NOT Let the TERRORISTS get Away with their REIGN of TERROR. Fro m SamuraiQueen. 😄😄😄

Not that we can trust anything the FBI says or does. However, I don’t know why they were so intent on wasting taxpayer money to finally admit what the rest of us already knew: No ‘insurrection’. Meanwhile, the FBI continues to let the Clintons and Bidens off the hook. So, like I said, can’t really trust the FBI, can we?

Ya but Mr Ed was worried about being raped.

She really has nothing to worry about in that regard.

You first; I have neither the desire nor the will nor the stomach! BLECCCH!!

Well, well, well. Bet that conclusion REALLY TICKED OFF NANCY PELOSI BIG TIME! But at the same time, she was relieved they didn’t find a huge connection to the whole “Break In” directed at her.

Most Americans have an idea that perhaps that whole break in idea was secretly floated from our Speaker so she could try to Impeach DJT one more time! IT HAD NOTHING TO DO WITH THE ELECTION OUTCOME BUT EVERYTHING TO DO WITH CREATING A FALSE SCENARIO THAT WOULD BLOW BACK ON PRESIDENT TRUMP — all orchestrated by Pelosi herself! THIS IS 100% TRUTH!!

Yes, she had help from another “anti-American” who many people still don’t know who he is or why he does the nasty things to our Nation! Research George Soros, born in Hungary, FORBIDDEN TO EVER RETURN TO HIS BIRTHPLACE BECAUSE OF “CRIMES AGAINST HUMANITY”. He has a standing Warrant for his arrest if he ever steps one foot in Hungary! Yes, do a deep dive and see what a slithering snake that BILLIONNAIRE really is and you will understand why he is pushing the destruction of our Society’s infrastructure!

Between Soros’ connections/money and Pelosi’s position, they both conspired to make the break in look like Trump Supporters destroyed the Capitol — it was NOT any real Trump supporters, but BLM and Antifa members DRESSED UP TO LOOK LIKE TRUMP SUPPORTERS THAT DID ANY OF THE BREAKING IN! Even in the FBI’s report, it was stated that there was BLM actions everywhere. Hmmmm? So The “Nasty Twins”, Georgy and Nancy, created the whole break in but it did NOT work about blaming DJT Supporters! Tsk tsk tsk!

Too bad the FBI couldn’t trace back actions to the Nasty Twins because if they did, they’d find a whole lot of sedition and corruption shared between those two! But Soros has had the knack of covering his tracks and working behind a smoke screen so no one knows who really is responsible for his evil acts. He’s slippery and slimy like an eel, but one day he will trip over his arrogant acts and his life will be over fast! That’s the day America will be FREE AGAIN from his twisted Power hungry lust!

As for Pelosi, someone find her broom and kick her back to Frisco to live in a cave somewhere. America does not need nor want anyone like Nancy who thinks she can run our lives and govt without our input! Wrong! See ya Witchy Poo!

It was FBI uncover agents and FBI Informants read the “deep dive research” on Revolver.news you will be amazed!!! What have they done to our once great country? It needs to be rescued from their grip!!

Strike 3 PIG PELOSI…..Maybe you can impeach Trump for the mess Biden just made in Afghanistan….Not to worry Pig Pelosi, you are not going to have that gavel for much longer…..Fact Nancy…You are also about to lose California and a Republican will replace your dumb ass nephew

You will never get the lame stream media to come anywhere close to admitting this, and that’s really sad, but what else could one ever expect from Communists?

Nasty Pelovsky (Hero of the Soviet Union) clearly deserves forgiveness, In her advanced geriatric psychosis she clearly believes she is queen of the Universe and anyone who dares to contradict her deserves the worst the Devil has to offer. My sainted Father used to say: ‘Anyone who treats you like you are the scum of the earth, they themselves are the scum of the earth.’ 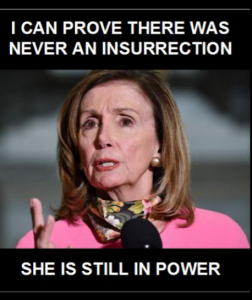 And it took 8 months for the FBI to figure this out? Trump should have cleaned this SWAMP on day one. And what compensation for the real victims: the ones in jail since 1/6? How do they fix their lives? And what ‘justice’ for the criminals in Congress?

[…] corresponds to ADN’s earlier reporting. In August 2021 ADN cited a Reuters report that […]

The January 6th capital riot was well planned in advance by Nancy Pelosi knowing president Trump would be holding a rally in DC.She could have called out the guard but she didn’t do that intentionally. Some got out of control which is natural, but entrance into the capital building was allowed by guards opening the doors, impossible otherwise. Those are patriots just like the Boston tea party was. The guilt ones are the left and their mob of deep state politics masquerading as innocent.