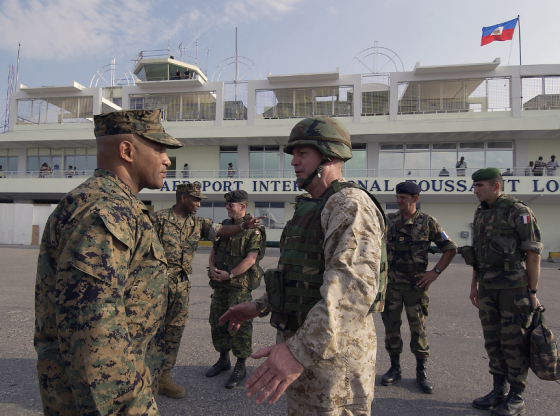 Marine wounded in Afghanistan during first days of airport defense.

Putin rejected role for US forces near Afghanistan at summit with Biden.

Trump’s deal with the Taliban draws fire from his former allies.

200 US Marines head to Haiti in wake of devastating earthquake.

Space Force met its 18-month deadline to get up and running.

Hunted by the Taliban, U.S.-allied Afghan forces are in hiding. The Afghan forces disintegrated ahead of the Taliban’s rapid advance. Now, the militants are searching for thousands of Afghan soldiers and security officials.

So much for easy counterterror ops. The President is coming up empty in his search to replace Afghan bases.

Trump’s deal with the Taliban draws fire from his former allies. The former president and his secretary of state, Mike Pompeo, are attacking President Biden over Afghanistan even as their own policy faces harsh criticism.

25% of Afghan Air Force fled, remainder in disarray, sources say. The Afghan Air Force was once considered the Kabul government’s lethal advantage over the Taliban. Now, aircraft and personnel that have not left the country may fall into Taliban hands, but sources say maintenance problems and insufficient aircrews likely will diminish their value.

Marine wounded in Afghanistan during first days of airport defense. The Marine was shot Monday as Marines were trying to establish the perimeter around the airport and create a defensive.

Putin rejected role for US forces near Afghanistan at summit with Biden. After Afghan withdrawal, U.S. military hopes to position forces temporarily near Afghanistan, but Putin told Biden that Moscow objects.

With Afghan collapse, Moscow takes charge in Central Asia. Along with Pakistan and China, Russia has gained broad influence in security matters at the expense of the United States and India.

About 200 US Marines head to Haiti in wake of devastating earthquake. The 200 Marines will be used to provide security to a joint U.S. task force.

‘Forgotten Battalion’ of US soldiers still preserving peace in Kosovo two decades on. The U.S.-led NATO force that has been keeping the peace for more than 20 years is on guard against disinformation campaigns aimed at stoking inter-ethnic tensions in Europe’s youngest nation, officials said.

The Space Force met its 18-month deadline to get up and running. Here’s what’s next. When Congress created the U.S. Space Force in December 2019, the Pentagon hadn’t launched a new military service since 1947. Lawmakers wanted the idea to become reality in just 18 months.

What discipline could you face for refusing the COVID vaccine when it becomes mandatory? The Navy’s top medical officer shared his thoughts on sailors and Marines’ who are resisting the vaccine.

SERIOUSLY? The biggest concern for Navy commanding officers? COVID. Cmdr. Bralyn Cathey doesn’t hesitate when asked what worries him most as the commander of the destroyer John Finn. “COVID,” he replies quickly and decisively.

The Cellar Dweller, mentally challenged, Incompetent in Chief Joe Biden offered to give the Taliban giggles Kamala, AOC and the squad, crazy Nancy Pelosi, and mad Maxine Waters in exchange for the US leaving Afghanistan!

Hey banana pudding Biden, order the destruction of the residual US military equipment!

LISTEN UP…RESCUE the AMERICANS Stranded in AFGHAN ASAP. BARRICADE the TERRORISTS. THERE is a WAY. HELP the AFGHAN REFUGEES…Get Alot of AMERICAN COS …CHARITIES to HELP. PREZ BIDEN Must RETIRE/RESIGN. HE is INCOMPETENT. From SamuraiQueen. 😄😄😄

Elizabeth, Glenn Beck and his Nazarene Fund just raised (in 48 hours) 22MILLION dollars to send planes over to rescue Americans from there. They can bring 3 to 5 thousand back to America. they’re on their way.

God bless you for your unfailingly positive message. We will not give up. In fact, WE DONATED to the Nazarene Fund today to help the Christians escape from the Taliban monsters. May the Lord see that the $$ is used effectively.

I have an idea…why don’t we trade Biden and his so called team to the Taliban for safe passage for those who want out ? Just throwing this out there.

I just cannot understand why Traitor Joe would not ask for assistance from the Commanders on the ground in Afghanistan so that the draw down would be safe for all who planned to leave the crap hole of a country safely. Was his closest advisor Dr Jill his only source of advice? He will be the cause of multiple atrocities committed against Americans and those who assisted the American Forces there. It is becoming a real blood bath. Joe has bloody hands already –shame on the monsters who defrauded the Republican voters in 2020. and put this brainless creature into the oval office.. THE DNC also has bloody hands..