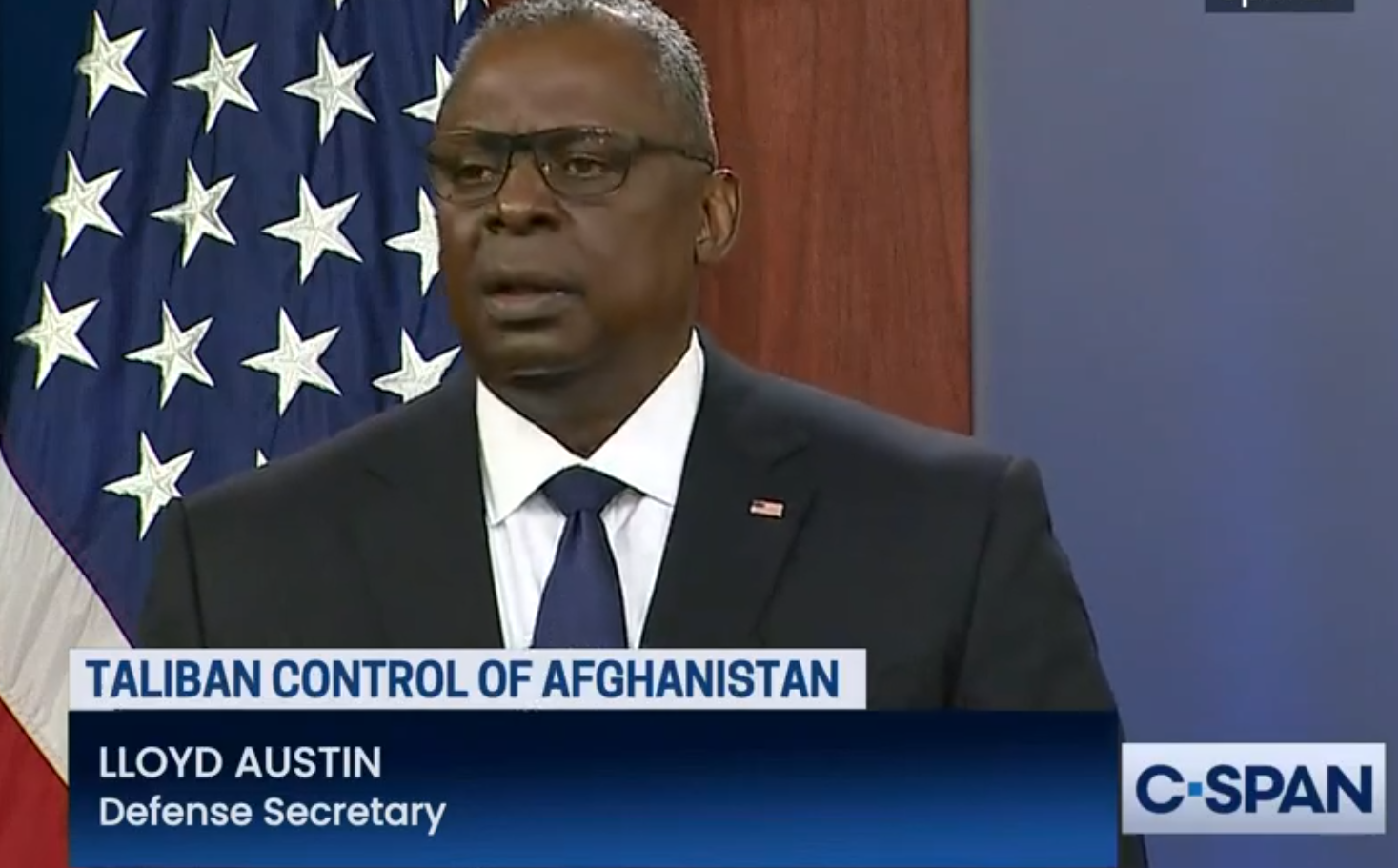 Even as ADN earlier reported that the much smaller British and French militaries deploy throughout Kabul searching for their citizens, Biden’s Secretary of Defense Lloyd Austin, has shockingly claimed that the U.S. military can’t go out and rescue Americans trapped in Afghanistan. The Pentagon also admits it doesn’t have any idea how many Americans have been evacuated, or how many there are in the country.

Best estimates are that between 10,000 and 15,000 Americans remain in the now defeated allied country and need to be evacuated immediately. As National Review (NR) notes:

The Taliban are undoubtedly well aware of the leverage they could obtain by holding Americans hostage. Evacuation is therefore not just a pressing humanitarian matter; it is essential to preventing a bunch of Stone Age barbarians from dictating terms to the United States of America.

Sadly Team Biden is showing shocking incompetence in the face of this avoidable and self-created threat.

On Tuesday, the State Department sent a cable to thousands of Americans in the country telling them to make their way to Kabul’s international airport but warning them, in ALL CAPS: “PLEASE BE ADVISED THAT THE UNITED STATES CANNOT GUARANTEE YOUR SECURITY AS YOU MAKE THIS TRIP.”

The below note went out this afternoon to American citizens requesting to be evacuated from Afghanistan, @alanacbs reports. It instructs people to come to Hamid Karzai Intl Airport in Kabul, but says the US govt cannot guarantee their safety as they make the trip. @CBSNews pic.twitter.com/rgEyjGup4K

In a highly criticized move, as part of his reckless and hasty retreat, Biden had earlier abandoned our largest base in Afghanistan, Bagram Airfield.

Then at a Pentagon briefing Wednesday, when Secretary of Defense Lloyd Austin was asked about the U.S. military’s capability to get its citizens out of Afghanistan, his shocking answer was:

We don’t have the capability to go out and collect large numbers of people.” while General Mark Milley, the chairman of the Joint Chiefs of Staff, stood by looking dejected and glum.

As NR notes, “You have to watch Austin deliver this line to grasp its full air of defeatism about a place where our military has moved about with some impunity for two decades…”

Watch the embarrassing defeatist display by Austin and Milley below:

SEC AUSTIN: “We don’t have the capability to go out and collect large numbers of people.” pic.twitter.com/k4cZESUav2

The best Austin could offer was a promise to try, at least for a while: “We’re gonna get everyone that we can possibly evacuate evacuated, and I’ll do that as long as we possibly can, until the clock runs out, or we run out of capability… I don’t have the capability to go out and extend operations currently into Kabul.”

This is absolutely unacceptable and disgraceful coming from the leaders of the world’s supposedly most powerful military. Simply un-American. ADN

Must have been identified as likely Trump voters.

Where oh where is giggles Kamala?

My first thought was taking of hostages and how President Reagan handled the situation. He repeatedly referred to Iran’s leaders as criminals, kidnappers and barbarians. He sniffed away discussion and steadfastly signaled his determination to switch from Carter’s kind and generous approach to a much tougher line. Expectation of the new treatment doubtlessly caused Iran’s Imam also to change tactics. He freed the 52 hostages with no strings attached, January 20, 1981, Reagan’s inauguration day.

Austin couldn’t protect an iguana from a Chihuahua. He is too focused on racism, political opponent ‘extremists’ and LGBTQ rights in the Armed Forces.

Interesting image about the Secretary of Doofus.

That’s the whole ball of wax about this entire incident…not protecting OUR CITIZENS! It is supposed to be USA FIRST.

LISTEN UP….YOU Need PREZ TR UMP to Make PEACE TALKS in AFGHAN with the TERRORISTS. TRUMP is GOOD at Making PEACE. HE Almost WON the NOBEL PEACE PRIZE. The AMERICAN LIV ES in AFGHAN MATTERalong with the GOOD AFGHAN PEOPLE. The U.S. GOVT Needs a KICK in Their A _ _ andSAVE AMERICAN LIVES. ARE YOU REAL MEN or BOYS?????? From SamuraiQueen. 😄😄😄

If the current Defense Department can’t get the job done, they should be resigning and make room for capable people to get the job done. No excuses. The Taliban has not followed any agreements, go back in there with every American force and kick the Taliban’s ass and save our people.

It’s much worse than 2.0. Iranian students captured 52 Americans; then the government wouldn’t let them go.

Even the Biden administration admits there might be several tens of thousands of Americans stuck in Afghanistan.

Any Afghan who was suspected of working with Americans, and admits to speaking English, is murdered on the spot.

The Biden Administration has asked the “evacuees” to make their own way to a single extraction point thru tens, if not hundreds of thousands of armed short-tempered non-english-speaking hostiles – because we’ve no clue how many they need to extract or where they are.

Biden, fix this or face the wrath of America.

Bull crap, get someone in there that can run our Military. This so call person is a Communist puppet for Biden. Time to get new blood in the Biden administration since Biden will not listen to this yahoo or Milley. Both should be tried for treason. Their trying to undermine our Military! The best military in the world.

If we cant rescue US citizens, It is time the Jackass Sec.of Def and the Jackass in Chief both loose their jobs.

This nasty piece of sheet has no idea what he is supposed to do to save American lives. He should have never been approved by the republican traitors in congress. Send them all to Afghanistan or Somalia on a one way ticket.

Biden is a mental cripple along with all the demoncrats EVERYWHERE. You communists will pay a price.

Kirby, Miller, Austin are about as worthless as they come. Good lord get rid of that dead weight.

Does seem to be trending that way. Can you say “Families ARE ticked?”

The only thing I can think of when SECDEF says We don’t have the capability to go out and collect large numbers of people.” while General Mark Milley, the chairman of the Joint Chiefs of Staff, stood by looking dejected and glum. is that they have already decimated the Spec Ops teams so they aren’t operationally ready. That they have already started destroying our Armed Forces with their draconian orders/actions over the past 8 months… They are demoralizing our troops and limiting their real training in the field having them do stupid classes on alleged systemic racism and critical race theory in addition to forcing them to take vaccination shots that are still conditional and not fully approved…. Good job Milley and Austin, both of you need to be tried for sedition and treason in addition to conduct unbecoming….. Both used to be hanging offenses in the Military.

How can OBiden and band of idiots be so damn stupid. Are they doing all this on purpose or what?

That’s right. So much for the ‘military’ dipsticks Old Fool Biden put in charge. They are so focused on diversity, damning Whitey and promoting LGBT-SQRZ that they took their eye off the ball: protecting American lives from the enemy. And decent officers on the Front that speak up demanding accountability are summarily dismissed.