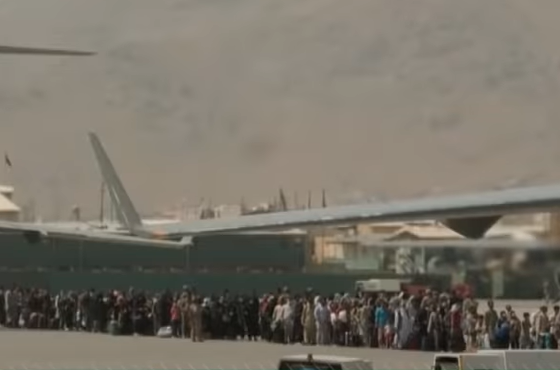 Now we know why Biden wants all U.S. troops out of Kabul in a week.

The Afghan who won’t surrender to the Taliban.

The Taliban’s Aug. 31 ‘red line.’ Now we know why Biden wants all U.S. troops out of Kabul in a week.

Petraeus questions US ability to counter terrorism after Afghanistan’s fall. The “harsh reality” of the fall of Afghanistan to the Taliban raises question on how closely Washington can keep an eye on Islamic extremism, David Petraeus, a former top commander in the Middle East and a former CIA director, said on Monday.

AMERICA IS BACK? Afghan fiasco raises hard questions for Europe. Once again, the United States has dragged its NATO allies into an embarrassing mess they had warned against, bringing calls for more autonomy. But the price of independence is steep.

House Republicans seek answers on US weapons seized by Taliban. Two Republicans on the House Oversight Committee are requesting the Pentagon detail its plans to recover or destroy billions of dollars worth of U.S weapons now in the hands of Taliban fighters following the fall of Afghan national security forces.

Kabul airport mission expands into city as evacuation deadline nears. With 5,800 troops on the ground and flights leaving on average every hour, the U.S. for the first time on Sunday exceeded its previous daily evacuation ceiling, flying out just under 11,000 Americans, third-country nationals and vulnerable Afghans, the deputy director of the Joint Staff for regional operations told reporters on Monday.

TRANSCOM boss vows to ramp up what is already one of the largest airlift operations in history. The head of U.S. Transportation Command, the military organization spearheading the massive humanitarian evacuation effort in Afghanistan, said Monday he expects to ramp up flights out of the country even further as the Aug. 31 deadline to withdraw all American troops and Afghan allies approaches.

The Afghan who won’t surrender to the Taliban. Ahmad Massoud leads the resistance in the province of Panjshir. Can he and his fighters hold out?

NO KIDDING – US VP Harris says China intimidates to back South China Sea claims. U.S. Vice President Kamala Harris on Tuesday accused Beijing of coercion and intimidation to back unlawful claims in the South China Sea, her most pointed comments on China during a visit to Southeast Asia, which she said was critical to U.S. security.

Afghan aftermath: Will Pacific states see weakened US? A trio of Indo-Pacific analysts told Breaking Defense that any discussion of Chinese messaging needs to acknowledge the Chinese are fast and brilliant at shaping a clear and intriguing message. It’s no surprise the Global Times editorial went up in less than 24 hours after the Taliban entered Kabul.

China’s top priority in Afghanistan is stability, experts say. The U.S. must move past blame for Afghanistan to focus on the threat from China, one expert says.

With Pfizer approval, COVID-19 vaccine to become mandatory for troops. The Pfizer vaccine will be the first to become required for service members.

LISTEN UP…S OMEONE Needs to Be RESPONSIBLE for the TERRORISTS Getting HOLD of AMERICAN WEAPONTRY. THERE is NO WAY the AUG 31 DEADLINE to BE MET. The TERRORISTS have Got to ALLOW AMERICANS to Leave AFGHAN. Do NOT PUT UP with TERRORISTS Injur ing or KILLING AMERICANS. WIPE THEM OUT. From SamuraiQueen. 😄😄😄

Democrap sleepy Joe Biden, the Incompetent in Chief, has always made the wrong decisions for 50 years!

Biden is guilty, if he had personally pulled the triggers of those weapons, and this is variably true, since he left the weapon at the Taliban’s hands to do with as they want. Don’t we have a law against such action, remember no one is above the law, plus the fact that he is a traitor to the American people, the countless live and blood will be upon his hands, no matter what he says and Almighty God sees what is going on and judgement day is soon at hand. He will go down in history as one of the mass murders along with Hitler and all the likes of them, what a horrible legacy to leave behind. God help this country while we still have a country. All his actions were in destroying this great land of ours, nothing good. Who needs an enemy, when we have one in the highest office of the USA America.