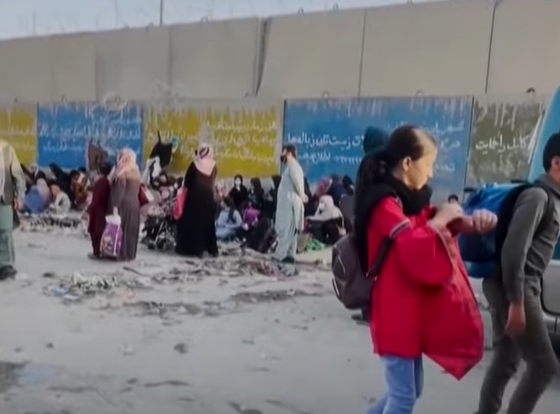 Taliban show off U.S.-made weapons and gear in a bid to intimidate, project authority.

Pentagon: Kabul evacuations will continue until last troops are out.

U.S. dare not betray the students at the American University of Afghanistan.

The real winner of the Afghan War? Pakistan.

Taliban takeover is a boon for cash-strapped Iran.

The Biden administration’s gaseous obfuscation on Afghanistan isn’t helping. Pentagon spokesman John Kirby, a retired rear admiral, recently said that during the long U.S. undertaking in Afghanistan “the goals did migrate over time.”

Taliban show off U.S.-made weapons and gear in a bid to intimidate, project authority. On his tour through the fallen city of Kabul last week, Taliban-aligned militant Khalil Haqqani rose to address a crowd at the capital’s largest place of worship, Pul-i-Khishti Mosque. As he clutched a U.S.-made M4 rifle, his security guards, similarly armed, were draped in the U.S. combat aesthetics that have come to symbolize the last 20 years of war in Afghanistan and Iraq.

COUNTERPOINT: Let’s not pretend that the way we withdrew from Afghanistan was the problem. To state the obvious: There was no good way to lose Afghanistan to the Taliban.

Here’s how Biden could mitigate damage done by the Afghan withdrawal. Historians will have time to sort through the evidence and apportion blame for the tragic end to America’s 20-year military intervention in Afghanistan.

A way out of Biden’s Afghan trap. The U.N. Security Council could authorize the U.S. and allies to enforce a safe zone for evacuations.

Hundreds of Americans still awaiting evacuation from Afghanistan: State Dept. About 4,500 U.S. citizens are among the 82,000 individuals transported out of the country since Aug. 14.

Qatar helping US fly Afghanistan evacuees to Germany. The planes are not part of the Civil Reserve Air Fleet activation, but are flying similar routes.

Pentagon scolds lawmakers who made surprise visit to Afghanistan, saying it interfered with the mission. Pentagon officials appear furious over an unannounced visit by two lawmakers to Afghanistan this week, saying that their presence took precious resources away from a precarious situation as the deadline to evacuate thousands of Americans and Afghan allies nears.

Not for the first time, COVID takes back seat to a more pressing crisis. The evacuation of refugees from Afghanistan depends on cramming people into closed spaces—during a global pandemic.

Anyone got any helos sitting around?’: How a private network is using a messaging app to rescue Afghans. Horrified by U.S. government failures to help former colleagues and friends trapped in Afghanistan, the group is using its connections to fill the breach.

The U.S. dare not betray the students at the American University of Afghanistan. President Biden is sticking to the Aug. 31 deadline for removing all U.S. troops from Afghanistan, which means that time is rapidly running out for those desperate to escape Taliban rule.

The real winner of the Afghan War? It’s not who you think. Pakistan, nominally a U.S. partner in the war, was the Afghan Taliban’s main patron, and sees the Taliban’s victory as its own. But now what does it do with its prize?

In quest for legitimacy and to keep money flowing, Taliban pushes for political deal with rivals. The Taliban is scrambling to reach a deal with former Afghan officials to establish a government that could gain international recognition, keep aid money flowing into the country and restore access to billions of dollars in aid.

US offers Vietnam help to counter China in South China Sea. Vice President Harris offered the U.S’s support to Vietnam in several areas including bolstering its maritime security as tensions between the Southeast Asian country and China continue to rise.

Taliban takeover is a boon for cash-strapped Iran. Tehran gets dollars from new oil sales to Afghanistan, while the Taliban get fuel for the ailing Afghan economy.

NORTHCOM needs help in space for Arctic communication. The biggest focus of collaboration between US Northern Command and US Space Command will be on secure communication capabilities in the Arctic, according to the leader of NORTHCOM/NORAD.

KABUL CHAOS – Emotions High as Private Emergency Evac Continue to Face Biden Obstacles and Obscene Deadline
FRIDAY PDB – AFGHAN CRISIS: Biden Gave Taliban ‘Hit List’ of Americans and Afghans, ‘Dead People Everywhere’ at Kabul airport, Private CItizen Army Fights On to Save Those Left Behind by Biden, War in Afghanistan is Not Over

Get rid of Joe Biden there is no excuse this commander is telling America a lie. There are more terrorists in Afghanistan then there are Soldiers this will be a slaughter do the math.

Send in aircraft’s to bomb area around airport…as are America…no terrorist will tell us what were can or can not do…get our people out of there now…in tired of Biden’s weak administration making our country look weak…only our illegitimate President is weak…I love my country and hate this push by socialist to destroy our great nation.

As I said in an earlier post that airport is NOT defensible, Bagram was. Our idiot in chief better wake up or step aside because this can very easily turn in to another Alamo. And it is going to happen quickly.

Greetings
One more time ..WAR IS HELL..* & President Mr. Joe Biden & Vice President Mrs. Kamala Harris ..& is that enough?.. “one” US MARINE DEAD OH! THAT TOO..?? Today’s Administration is incompetence, weakness, & much distressed .regarding AFGHANISTAN in your hands brought…Disastrous & Debacle & President & Vice President all Indicate failure of character in the face one SUCCUMBS TO COWARDICE..& is to known as a COWARD!!!!!! Tks/ Coop..Charlie G/Sr………………………………………….THE USA.!

LISTEN UP…PREZ TRUMP Needs to Get HIS JOB Back. JUST as KING DAVID Regained HIS THRONE. GOD Chose PREZ TRUMP to Be PRESIDENT of the U.S. Not PREZ BIDEN. Without GOD’S BLESSING…There is CHAOS….CONFUSION and ALL KINDS of EVIL. From SamuraiQueen. 😄😄😄