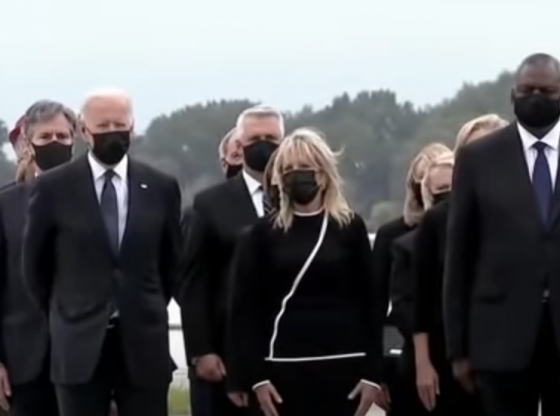 Today’s SPECIAL EXTENDED AFGHANISTAN CRISIS EDITION PDB  WAS DELAYED DUE TO AFGHAN CRISIS –  It includes a variety of critical issues.

It shouldn’t fall to veterans to clean up Biden’s mess. The time was set. At noon Thursday, Marines would swoop in and usher a group of 29 Afghans through Abbey Gate into Kabul Airport for evacuation.

President Biden failed U.S. troops in Kabul. Mr. Biden blamed his generals for recommending that we abandon Bagram Air Base in favor of the insecure Kabul airport. If that’s true, then the generals responsible should be fired immediately.

One soldier died in Kabul attack, Army leaders confirm in ‘heart-broken’ message. ISIS claimed responsibility for the attack, which was the third deadliest single engagement for American troops in the entire war — and the deadliest that didn’t include a helicopter going down

‘Just one more’: Inside the massive military community effort to save Afghans. Thousands of veterans have worked tirelessly to evacuate Afghans and Americans from Kabul. Even when the last flight leaves next week they vow to continue.

After Kabul attack, evacuations resume and troops prepare to fully withdraw. Troops at the Kabul airport are changing up their tactics to stay safe in their final days in Afghanistan.

Rockets target US troops as Afghanistan withdrawal enters final stage. U.S. anti-missile defences intercepted as many as five rockets that were fired at Kabul’s airport early on Monday, a U.S. official said, as the United States rushed to complete its withdrawal from Afghanistan to end its longest war.

The crisis in Afghanistan is shaking NATO. Its foundation was already weakening in Europe. European leaders are correct to wonder what the frightening incompetence on display in Afghanistan means for the NATO alliance. But they should also be nervous that the public opinion in their own countries is making the alliance unsustainable.

US drone strike takes out ISIS-K suicide vehicle in Kabul: CENTCOM. U.S. carries out drone strike against ISIS-K in Kabul

Biden’s Afghanistan policy shows the world a wobbly, impulsive U.S. In the immediate aftermath of the heroic rescue of soldiers from Dunkirk, Winston Churchill addressed the British as adults, reminding them that “wars are not won by evacuations.”

Beefed-up sanctions could limit the damage in Afghanistan. The Taliban’s control of the government will significantly increase their wealth and influence.

Navy, Coast Guard send ships through Taiwan Strait in wake of assault drills by China. A U.S. Navy guided-missile destroyer and Coast Guard cutter steamed through the Taiwan Strait on Friday, continuing monthly transits of warships through sensitive waters off China’s mainland, the Navy said in a news release.

North Korea appears to have restarted Yongbyon nuclear reactor. Inspectors cite evidence of resumed operations at the plutonium-producing plant, which had been shut down since 2018.

How will Afghanistan live on in Marine Corps lore? Belleau Wood. Guadalcanal. Inchon. These battles are largely the stuff of history books for the public, all part of greater wars and grander strategies that helped the United States triumph in its conflicts overseas. To Marines, however, these names mean everything.

Viral Marine who demanded ‘accountability’ for Afghanistan failures: ‘I’m resigning my commission.’ A Marine officer who filmed a viral video calling out senior military and civilian leaders for failures in Afghanistan resigned his commission “effective immediately” in a new 10-minute video Sunday and threatened to “bring the whole [expletive] system down.”

FRIDAY PDB – AFGHAN CRISIS: Biden Gave Taliban ‘Hit List’ of Americans and Afghans, ‘Dead People Everywhere’ at Kabul airport, Private CItizen Army Fights On to Save Those Left Behind by Biden, War in Afghanistan is Not Over
‘PLAN B’ – Why I Care About Our Loyal Afghan Allies Abandoned by Biden-Harris

LISTEN UP….The U.S. MILITARY Needs to COME UP with Better STRATEGIC PLANS. TEAMWORK…ORGANIZATION…SPEED and ACCURACY. THEY Can KICK the TERRORISTS BUTTS. Do NOT GIVE UP. The TERRORISTS Have WEAKNESSES….FIGURE it OUT. From SamuraiQueen. 😄😄😄

LISTEN UP: For corporate America: Go woke, go BROKE!
For the military: Go woke, up in smoke!