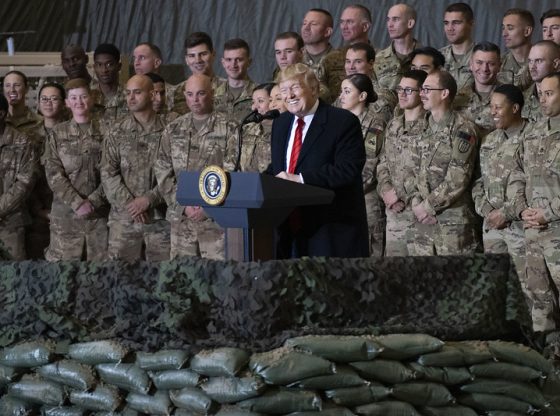 Taliban declare victory from Kabul airport, promise security. In a show of control, turbaned Taliban leaders were flanked by the insurgents’ elite Badri unit as they walked across the tarmac.

A dishonest Afghanistan accounting. Biden spins a tragedy for U.S. interests into an antiwar victory.

No, Trump didn’t force Biden’s withdrawal. The Taliban violated the Doha agreement, so the U.S. could have stayed.

Biden defends Afghanistan exit: ‘We’ve been a nation too long at war.’ On the first day in nearly 20 years without U.S. troops on Afghanistan soil, the president said he believes his decision to leave the country saved American lives.

Before Afghan collapse, Biden pressed Ghani to ‘change perception.’ In the last call between U.S. President Joe Biden and his Afghanistan counterpart before the Taliban seized control of the country, the leaders discussed military aid, political strategy and messaging tactics, but neither Biden nor Ashraf Ghani appeared aware of or prepared for the immediate danger of the entire country falling to insurgents, a transcript reviewed by Reuters shows.

The war is ‘over.’ But Afghanistan’s crises are only getting worse. In an address to the nation Tuesday, President Biden appeared to confront domestic critics of his decision to carry out the withdrawal of U.S. forces from Afghanistan.

Biden: ‘No deadline’ for Americans still in Afghanistan who want to leave. President Biden on Tuesday vowed the federal government would remain committed to getting U.S. citizens who want to leave Afghanistan out of the country, estimating that up to 200 still remain following the American military withdrawal.

Fear and uncertainty for Americans and their Afghan partners stranded in Afghanistan. Mike, a 29-year-old U.S. green-card holder who was an Afghan interpreter for the U.S. Army and later worked as an Uber driver in Washington, D.C., is now huddled in a hotel outside Kabul with his wife and three young children, his parents, two brothers and a sister, stranded in his own country, running out of money and hope.

Covert evacuations and planned demolitions: How the C.I.A. left its last base in Afghanistan. A compound outside Kabul was one of the most secretive — and notorious — in Afghanistan. Our visual analysis shows how the spy agency shut down its operations there — and how the Taliban then entered the site.

Pentagon denies it left military dogs behind in Afghanistan. The U.S. military on Tuesday denied reports in the wake of its departure from Afghanistan that it had left working dogs behind at the airport in Kabul, or that it had abandoned dogs in cages.

Are China and Russia trying to attack the law of the sea? Whether Moscow and Beijing are mounting a concerted attack on the law of the sea or acting individually and opportunistically in Eurasia’s peripheral seas, I have no idea. But they are acting.

In leaving Afghanistan, U.S. reshuffles global power relations. After Afghanistan’s U.S.-backed government collapsed on Aug. 15, Beijing couldn’t contain its glee at what it described as the humiliation of its main global rival—even though Washington said a big reason for withdrawal was its decision to focus more resources on China.

A resignation and mental health screening: The unfolding saga of the Marine who called out leadership on Afghanistan. The story of Lt. Col. Stu Scheller, the Marine officer who posted a viral video demanding accountability from military leaders for the failures in Afghanistan, took a strange turn this week after he posted a new video Sunday in which he resigns his commission “effective immediately” and threatens to “bring the whole f—ing system down.”

But Biden said the withdrawal was a success; it was Trump’s fault. But, so was the stay in Mexico policy, but Biden didn’t hesitate to alleviate out country of that protection.

America and we will be right back in it.

Following link at the bottom… You can have your first check by the end of this week…Lifetime Opportunity
This is what I do…………… http://gg.gg/MonthlyCheque2