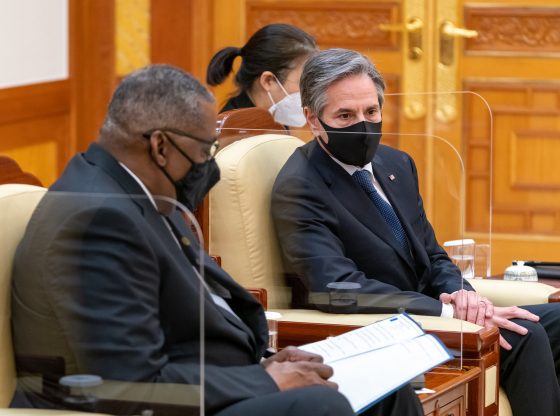 The Afghan Fiasco Will Stick to Biden. It hit at his reputational core. He no longer comes across as empathetic, much less serious.

Anti-Taliban resistance fighters rely on grit, history and geography to hang onto a sliver of Afghanistan. Guerrilla fighters are part of a fledgling resistance force determined to prevent the Taliban from seizing the last fragment of Afghanistan the militants have yet to dominate.

Syria Villagers Fear Exit of American Troops After U.S. Withdrawal From Afghanistan. The Biden administration has said it wants to reduce the U.S. military footprint in the broader Middle East

I helped design the SIV program. It needs an urgent update if we want to help Afghan refugees. Fortunately, there is a solution that could resolve the status of most of these Afghans, securely and fairly, if both Congress and the Biden administration will take a few long-overdue steps.

The best way for the U.S. to deal with the Taliban? Carefully and mostly invisibly. America has no alternative but to work with the Taliban in some way to protect U.S. interests.

‘We need everybody’: Plans to make women register for potential military draft advance in policy bill. Both House and Senate lawmakers have offered support for the idea in recent months.

China’s Type 003 aircraft carrier will be advanced, but not a game-changer for US, experts say. A report from Taiwan’s Ministry of National Defense details advanced Electronic Warfare capabilities and an increased ability to project power into the Pacific.

The US Navy is combining diver teams as it readies for future wars. The Navy’s salvage and Seabee divers both work underwater but on very different missions. Now they may find themselves working together more often to prepare for a future conflict where its outcome could depend on the speed of their capabilities.

POLITICIZING BOARDS – Pentagon restarts 16 advisory boards after 7-month pause. Defense Secretary Lloyd Austin has agreed to restart 16 defense advisory boards, after halting activity by all the panels in February and essentially purging a number of members who were appointed in the final days of the Trump administration.

Dishonorable discharges for vaccine refusal would be blocked under congressional proposal. The plan is included in the House Armed Services Committee’s version of the annual defense authorization bill.

Fired Marine’s question about leader accountability should not be dismissed. Let’s not conflate Lt. Col. Stuart Scheller’s story with the questions that he asked, which were not unreasonable, this retired Marine colonel writes.

Judging from the piles of dung (the Generals talking on TV) I thought they already removed anyone with skill, talent, and love for America?

First: I’m unsubscribing because all your articles are from the WSJ and require a subscription to read. No f*?!ing way I’m giving that rag a dime. Useless.
Second: It appears your comment section is an ad space for work at home scams, which adds to the uselessness of your website.

All these pathetic,incompetent,idiots in the hidenbiden administration, from biden down, need to be thrown out of office. After they are impeached, and removed,they need to be arrested for treason and espionage.

Of Course Biden /Obama would wish to politicize the Military. This is part of the Obama desire to FUNDAMENTALLY and Radically CHANGE THE USA as Obama said to Joe the Plumber when Obama was campaigning for his first term in office.. Obama is now in his third term in the oval office and he will turn the USA into a Marxist Utopia. With the Military under a secretive Marxist who will carry out all of the orders to completely make our once great military a broken shadow of their former glory, with a broken spirit and who will never again know the glory of VICTORY.over the enemies of FREEDOM.

L ISTEN UP….AS LONG as PREZ BIDEN is in the WHITE HOUSE…the CHAOS….CONFUSION and ALL KINDS of EVIL will CONTINUE. GOD is ANGRY that PREZ TRUMP’S JOB was TAKEN from HIM. GOD is the RULER of MEN…KINGS…PRESIDEN TS. HE has the LAST WORD. From SamuraiQueen. 😄😄😄