Screenshot of video where a University Student removed 9/11 memorial flags.

Over the past weekend, as the nation mourned the loss of life from the horrific terror attacks on 9/11 2001, Fadel Alkilani, a student leader at Washington University in St. Louis, was caught on video grabbing small U.S. flags from an on-campus display and putting them into trash bags.

The patriotic display, part of the 9/11: Never Forget Project memorial which featured 2,977 flags, representing the lives lost in the September 11, 2001, terror attacks, had been put up by the WashU College Republicans.

The video of Alkilani, a student Senator, was quickly shared on Twitter where it created a firestorm of anger. The Young Americans for Freedom called his actions ‘Despicable.’

In a published statement, Alkilani said:

I had no intention of removing the flags from the Mudd Field area, and my full protest did not have the chance to be actualized. My planned protest was to place the bags of flags on Mudd field, along with various statistics (including those below) explaining the human cost of 9/11 in the past 20 years.

Alkilani’s statement goes on to say that the 9/11 memorial display was “incomplete” because it did nothing to call attention to the victims of Islamophobia in the U.S., or the civilian casualties in the Middle East as a result of American military involvement.

Alkilani added: “Any memorial of 9/11 that does not contend with these facts is not only incomplete, but it also amplifies pro-imperialist sentiment and actively disrespects those who have died because of American Invasion.”

But as the Charlotte Observer reported:

Nick Rodriguez, WashU College Republicans president, told Student Life that Alkilani “made a mockery” of one of America’s darkest days.

“What does it say to be a top American institution, and have yourself represented by a student leader who has no respect for property, campus traditions or the remembrance of thousands of lost lives,” Rodriguez told the outlet. “Today is about remembering the tragedy, 20 years ago to the day, not to make a political statement. Any reason he can conjure to remove the flags I find ludicrous.”

I would add it is beyond ludicrous; it is offensive, unacceptable, and un-American.  ADN

How very said that a blog named American Freedom Fighters is now censoring. I’ve seen a certain troll x 7 of his own usernames get our free speech shut down, but then perhaps you never were what we thought you were. .

Joe biden is a traitor. Nancy pelosi and the rest of the DC demos are in there with him. Soros has bought them and sure Bill Gates has skin in it. Hanging is to good for these traitors.

If he hates the USA so much, why is he even here?

Probably because America is the only place that will put up with the ugly mf. He should be the main guest at a blanket party.

Because when enough of them are in America, and there will be, they will make another attempt to conquer the world as instructed by Mohammad.

Check out his name.
Any chance he could be of Muslim background?

Where is he hiding his camel?

Good gosh I am SOOooooo pleased that our colleges are teaching such things to the next generations. < sarcasm stops >

Throw this scum in jail! You don’t get to tear apart memorials because you don’t agree, maybe he should go back where he came from if he’s offended.

Yes, he should be deported if he came from another country. If a naturalized citizen, this should be rescinded as well. I fear he could become a suicide bomber next. His demeanor is condescending for a leader. Ban him from the student leadership on campus immediately.

What about all the statues that antifa and blm tore down? And the ‘woke’ state governments tore down statutes as well. All in the name of “cancel culture”. There was people calling others that didn’t agree with them racist when they were the racist ones. Being politically correct means you should never open your mouth because whatever you say is wrong.

I didn’t agree with those statutes being torn down either. Not politically correct I don’t really care if you find something offensive, everyone is offended at times but you move on. Funny how when people don’t get their way, nothing is their responsibility and everyone is racist so they can be a perpetual victim.

Expelled Hell ! He should be returned to a country of his likeing. Russia, China, Iran, Iraq, he can take his pick. We don’t need these educated idots in America. Hey he should invite the US congress to go with him they hate America too

The US probably paid for his education. His family was also probably one of the first invasion set up by the puppet Master Obama. How many more invaders are going to be allowed into this country they hate so much? He and his Family should be expelled from the country and put on a terrorist watch list

Kick that scumbag OUT of the university! He should be sent to the middle east where the slimeball belongs!

careful, I don’t think Israel, Egypt, Jordan, or Saudi Arabia want him either…

I used to go there The school won’t do a thing.

I know a few muslims in America and they have no respect for anyone except their own and have absolutely no intention of assimilating into the American way of life as required by our immigration laws. Some may act friendly, but I would bet my last dollar they would cut your throat in a heartbeat if given the chance. I have never heard one of them ever apologize for 911. The closest to it was “Someone did something” which is certainly not an apology as far as I’m concerned.

Glad I had a trade, college, military and Civil service. What do some of these college people have, they are book smart and dump dumb.

wrong, they are not even book smart anymore, they are hate-indoctrinated.

Do not expel him. Shoot him.

Include his enablers in the shooting.

This is simply symptomatic of the leftist indoctrination going on in Academe. Most major university campuses are filled with WOKR Progressive professors and staff that peddle the mindless blather that the US is a nation built on Slavery and exploitation. Examine of the “Studies” programs and the indoctrination is apparent.

Fadel is another ‘woke’ communist cancel culture vulture following an agenda to destroy American culture, in this case the rememberance of a national tragedy of epic proportions. I hope the school cancels his presence there.

Brain washed by the left

not with THAT name!! unless you mean brainwashed by HIS family!

If the school will not expel him, he should be shunned. No one in the school should ever say a word to him including the teachers.

Mr. Alkani clearly is committing a crime, namely PROPERTY DESTRUCTION. He should be arrested and prosecuted accordingly. Not only that he is acting like a dictator suppressing the voices of other people. SEPTEMBER 11 IS AN UNIQUE MEMORIAL DAY AND SHOULD BE RESPECTED AS SUCH, NOTHING ADDED! In recent days, the former disgruntled Governor of New York wanted flags at half masts in memories of those killed by Covid19 and in honor of front-line essential workers on September 11. He was quickly taken to task and silenced. Yes, essential workers deserve honor, and victims of the pandemic can be memorialized but not in conjunction with September 11.

I truly hope he burns in hell, AFTER getting his azz beaten by the people who died on 9/11. Yeah, I said it. Step off, biatch.

STINKING ” MUZZY ” RAT needs an good old RED NECK introduction for sure! Arrest him for destroying ” PUBLIC PROPERTY FOR STARTERS! “

And NOBODY beat this chimp into unconsciousness? REALLY? ADN deleted my previous statement wherein I hoped he burned in hell after being beaten by those killed on 9/11.

“Awaiting for goddamned approval”. What the hell is this, Soviet Russia??

What has the school done about the vandalism?

Close your eyes and what do you see? That’s what the school will do

I AM FROM KIRKWOOD MISSOURI AND I WOULD HAVE BEATEN HIM TO A PIECE OF BLOODY MEAT IF I HAD BEEN THERE . THIS IS ANOTHER EXAMPLE OF SO CALLED DIVERSITY, JUST LOOK AT THE NAME, REMOVE HIM FROM AMERICA AND SEND HIM BACK TO HIS 3RD CENTURY COUNTRY !! VIETNAM VET 67-68

I’m with you. Thanks for your service, my friend.

Tampering with another persons property transitions from legal protest to criminal action, and if not properly prosecuted, will eventual drive sane people into insane violent responses, we can learn from history.
This criminal, or Islamic fanatic, has a level of pyschopathic arrogance that makes him unqualified to participate in our free society. Expelling by the university, since is was done on their grounds is a start. Criminal charges should result in mandatory psychiatric treatment and regular evaluations as to the risk of his release. If he is unwilling to comply with treatment, then if possible return to the Islamic place of his origin. He should be warned the he will be watched, and executed if he is observed to become an danger.

Freaking turd should GTFO of our country if e hates it here! 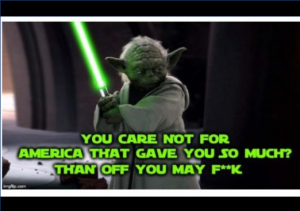