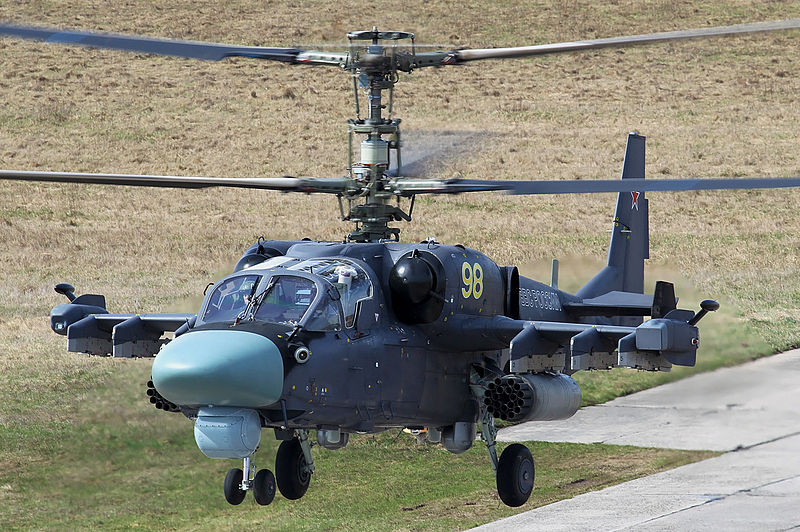 The ‘Mud Sharks’ unique counter rotating rotors, large stub wings and lack of tail rotor give it excellent speed, maneuverability, and lift. They could greatly enhance the air attack capabilities of China’s Type 075 carriers compared to its current inventory of naval utility helicopters with limited attack capabilities (such as the Z-8, Z-18, and Z-20F).

#China will order atleast 36 Ka-52K alligator combat helicopters from Russia to PLA Navy. These helicopters will be on PLA’s type 075 universal amphibious assault ship. Something to note as the region gets caught in arms race. pic.twitter.com/6hJDEtGzEN

They would also be far superior to China’s non-naval attack helicopters (the Z-10 and Z-19) that could theoretically launch from amphibious carriers, but are not specifically designed to operate at sea.

The National Interest explains that:

The Ka-52 also has a thirty-millimeter gun and can mount short-range anti-aircraft missiles that could be effective against slower flying aircraft, as well as long-range Vikhr and Ataka anti-tank missiles, rocket pods, and additional gun pods. It also boasts a suite of countermeasures to give it a chance of dodging anti-aircraft missiles.

The Mud Shark’s long-range radar also allows it to fire the large Kh-35 anti-ship missiles with a range of eighty miles (or 160 miles if using the latest Kh-35U variant).

If the Ka-25 purchase is confirmed, the most likely employment for these powerful naval attack birds would be on the People’s Liberation Army Navy (PLANs) growing fleet of large Type 075 Landing Helicopter Docks (LHD) similar to U.S. Navy/Marine Corps Wasp-class amphibious assault ships.

As the National Interest notes:

These are large amphibious carriers designed to deploy both helicopters and landing craft full of troops and vehicles onto possibly hostile shores. The Type 075 has a maximum capacity of thirty helicopters, and its huge deck has spots for six helicopters to land or take off with simultaneously. In January, China launched the third of eight Type-075s on order.

Type 075s would play an especially critical role in the contingency of an invasion of Taiwan, or in conflicts over disputed islands in the South China Sea.

While their primary role would be ferrying ground forces to shore, attack helicopters could provide desperately needed close air support against hard targets while being (in theory) more likely to survive lethal short-range air defenses. Attack helicopters could also substitute for carrier-based jets in expeditionary deployments against less formidable adversaries.

China appears very serious about developing a full amphibious assault capability to include the latest Russian navalized attack helicopters. This is something both U.S. and Taiwanese defense planners are sure to be watching closely. ADN