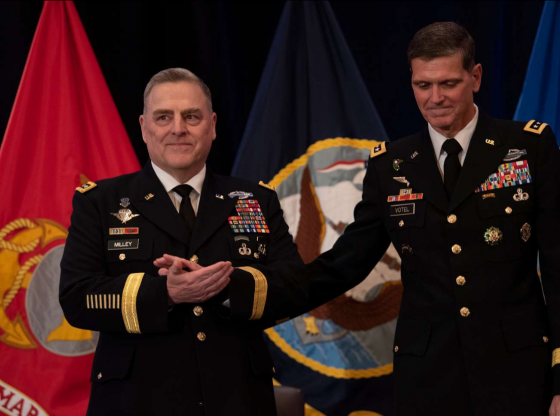 Milley denies working to undermine Trump or civilian control of the military. In his first comments to lawmakers on the controversy, the Joint Chiefs Chairman said his moves in the final days of the Trump presidency were all routine.

National security on the brink: What Congress and the public need to know. Milley is quoted in two phone calls with General Li Zuocheng, first reiterating that despite Chinese intelligence to the contrary the U.S. was not preparing to attack.

Marine lieutenant colonel who demanded ‘accountability’ in brig, not charged. Four UCMJ charges are being considered.

Former Navy secretary registers as foreign agent to lobby on Australian sub deal. Donald Winter, who served as secretary of the Navy during the George W. Bush administration, has registered as a foreign agent to represent Prime Minister Scott Morrison of Australia in the country’s negotiations with the U.S. and U.K. to acquire an American-made nuclear-powered submarine.

Pentagon leaders: Kabul withdrawal was a ‘strategic failure.’ “We helped build a state … but we could not forge a nation,” Defense Secretary Lloyd Austin said of the two-decade war effort.

No major incidents of illegal activity’: DHS told Pentagon as pro-Trump mob breached Capitol. A communication on Jan. 6 from a key DHS hub that was emailed to senior Army leaders dramatically undersold the unfolding chaos.

Threats from Russia more immediate, but threats from China greater: report. For the United States, the 20-year war in Afghanistan may over, but threats and challenges from so-called near-peer competitors remain.

Opinion: The source of the ‘Havana syndrome’ must be found. National security demands it. After nearly five years, someone and something is still causing serious injury to U.S. officials abroad.

Biden’s will to resist China is faltering. Washington’s abandonment of Afghanistan hung like a dark cloud over the lofty language in President Biden’s speech to the United Nations last week. It offered meager hope to the Afghan people now destined to suffer again under the Taliban’s barbaric rule.

The Pentagon finally tests a hypersonic missile without screwing it up. he U.S. Defense Advanced Research Projects Agency tried again to test a hypersonic cruise missile. This time, the speedy missile didn’t just fall off the B-52 carrying it and tumble to the ground, as happened last year.

China is the biggest Threat to the U.S.!

China is the Biggest Threat to the U,S,A,!