A Monument to Honor Fallen Troops from Global War on Terror

A Monument to Honor Fallen Troops from Global War on Terror 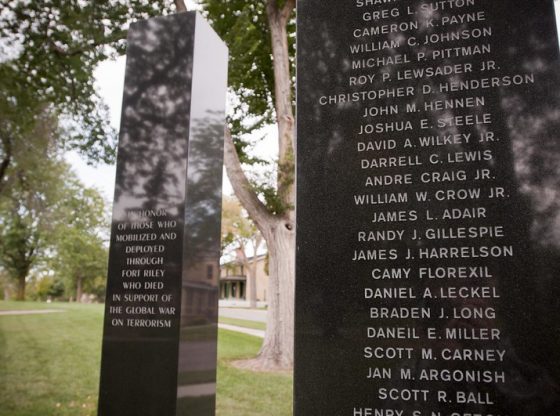 The Global War on Terror Monument at Fort Riley, Kan., honors Soldiers from the post who have given their lives in Afghanistan and Iraq. 15 names will be added to the monument this year. / Photo via The US Army

The U.S. military’s involvement in Afghanistan is now over, but advocates are working to make sure those deployments — and the fights still going on now — are never forgotten.

Veterans groups and lawmakers are pushing for Congress to approve a new Global War on Terror memorial on the National Mall as a permanent reminder of the last 20 years of conflict overseas, including Afghanistan, Iraq and other locations.

This week, the effort took a significant step forward with inclusion of language in the House draft of the annual defense authorization act, a massive military budget policy measure that has passed out of Congress annually for six decades.

Senate lawmakers also made a bid to approve the National Mall location in that chamber, but were blocked in efforts to fast-track the legislation. Sen. Joni Ernst, R-Iowa and herself a veteran of the Iraq War, said the move is needed to remind Americans of the sacrifices made by hundreds of thousands of troops in recent years.

Read more on The Military Times.

I agree those who served during that conflict deserve to be honored. They all fought a tough war and our government let them down like Viet Nam.