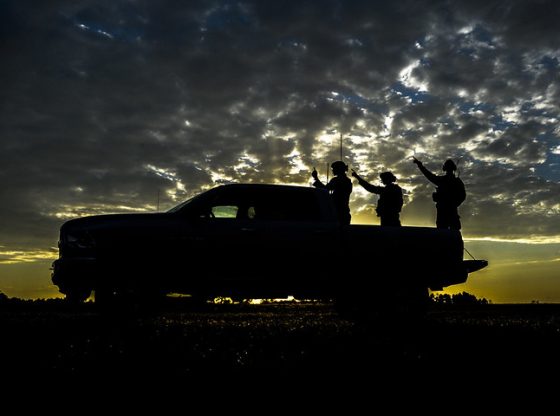 U.S. Air Force combat controllers point to an incoming aircraft while standing on the back of a truck during Emerald Warrior 14 at the Stennis International Airport in Kiln, Miss., May 2, 2014. / DoD photo by Senior Airman Colville McFee, U.S. Air Force/Released

A sword-wielding man dressed as a ninja attacked several special operations soldiers who were training at a California airport, reportedly forcing them to shelter in a hangar and inflicting wounds that required stitches.

The bizarre assault took place at Inyokern Airport, an airfield in the Mojave Desert about 100 miles north of Los Angeles, sometime after 1 a.m. on Sept. 18, according to what appears to be a military incident report shared on Instagram and Reddit.

Records from the Ridgecrest Police Department seem to confirm some details in the document posted to social media in a photo late Wednesday that said two soldiers had to receive stitches before returning to duty.

Their names were redacted in the photo shared on social media, but one was identified as a staff sergeant and the other as a captain. The details suggest that they are members of the 160th Special Operations Aviation Regiment, an elite helicopter unit known as the Night Stalkers.

Where did Ninja come from?
How did they pass Security?
Will troops now go armed on base

A weeb with a sword is still a guy with a sword although if those had been army rangers that might have ended differently . Still there needs to be a investigation because assault with a deadly weapon on a military base is bad for moral .