Is Joe Biden a congenital liar, or is he simply in desperate need of memory care?

Either option is disturbing, but it’s one or the other after this week’s Capitol Hill testimony by America’s top military leaders who were grilled before congressional oversight panels.

These warriors’ remarks on Tuesday before the Senate Armed Services Committee could not have contrasted more with Biden’s claim that no one ever advised him to leave a modest deployment of American GIs as control rods within the veritable atomic pile that is Afghanistan.

George Stephanopolous of ABC News spoke with Biden on August 18, as pandemonium reigned in Kabul:

STEPHANOPOULOS: But your top military advisors warned against withdrawing on this timeline. They wanted you to keep about 2,500 troops.

STEPHANOPOULOS: They didn’t tell you that they wanted troops to stay?

BIDEN: No. Not at — not in terms of whether we were going to get out in a timeframe all troops. They didn’t argue against that.

STEPHANOPOULOS: So no one told — your military advisors did not tell you, “No, we should just keep 2,500 troops. It’s been a stable situation for the last several years. We can do that. We can continue to do that”?

BIDEN: No. No one said that to me that I can recall.

So, Biden repeatedly and definitively claimed that the top brass never urged him to keep 2,500 US troops in Afghanistan, to prevent the exact bedlam that erupted after American GIs began to decamp ahead of Biden’s order to withdraw by August 31.

Not so fast! replied Biden’s leading military advisors and his Pentagon chief.

“I don’t discuss exactly what my conversations are with the sitting president in the Oval Office,” Chairman of the Joint Chiefs of Staff, Army General Mark Milley, told the senators. “But I can tell you what my personal opinion was, and I am always candid.”

Milley added: “My assessment was, back in the fall of 2020, and remained consistent throughout, that we should keep a steady state of 2,500, and it could bounce up to 3,500, maybe, something like that, in order to move toward a negotiated solution.”

McKenzie also forecast the dire repercussions of ignoring his conclusions: “My view is that 2,500 was an appropriate number to remain, and that if we went below that number, in fact, we would probably witness a collapse of the Afghan government and the Afghan military.”

Defense Secretary Lloyd Austin III, a former Army general, verified that Biden heard Milley and McKenzie loud and clear. Austin told Senator Tom Cotton (R – Arkansas), “Their input was received by the president and considered by the president, for sure. In terms of what they specifically recommended, senator, as they just said, they’re not going to provide what they recommended in confidence.”

So, once, twice, three times these top national-security figures hurled Biden beneath the bus. This was highly unusual, if not utterly unprecedented.

Did the President of the United States flat-out lie to the American people about this life-and-death matter perhaps to cover up his horrible and deadly decision to remove these troops, despite high-level contrary advice? Or did these supremely vital conversations simply slide off of Joe Biden’s faltering brain, like fried eggs across hot Teflon?

Either way, America is in deep trouble. ADN 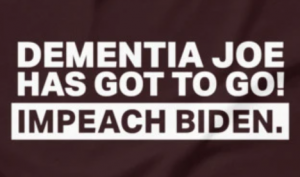 Joe and the ‘ho have got to GO!

Joe Biden is the amalgam of deceitful and demented.

Biden is both and then some

Arizona election results
284,412 ballot images were “corrupt or missing”
255,326 early votes don’t have a record in the county
173,104 votes were lost
96,389 ghost votes
23,344 mail-in ballots from people who no longer lived at their recorded address
17,322 duplicate ballots were discovered
9,041 mail-in voters returned more than one ballot
2,382 Arizonans voted in person who did not live in Maricopa County anymore
2,081 people who voted were no longer residents of the state
277 precincts had more ballots cast than residents
HOW ABOUT CORRUPT?

At this point it is a good indication this man is and has both!
When we thought the Obama admin was bad, Ole Biden tops the course
.
Sad part is it is being done right in the open and seems no one but the
American Voter who is actually alive cares?

…or DELUDED
…or DISSIMULATING

OLD JOE IS BOTH . HE IS TRYING TO DISTROY OUR COUNTRY AND OBAMA IS IN THE WINGS PUSHING IT AND TELLING OLD JOE JUST WHAT TO SAY AND DO,