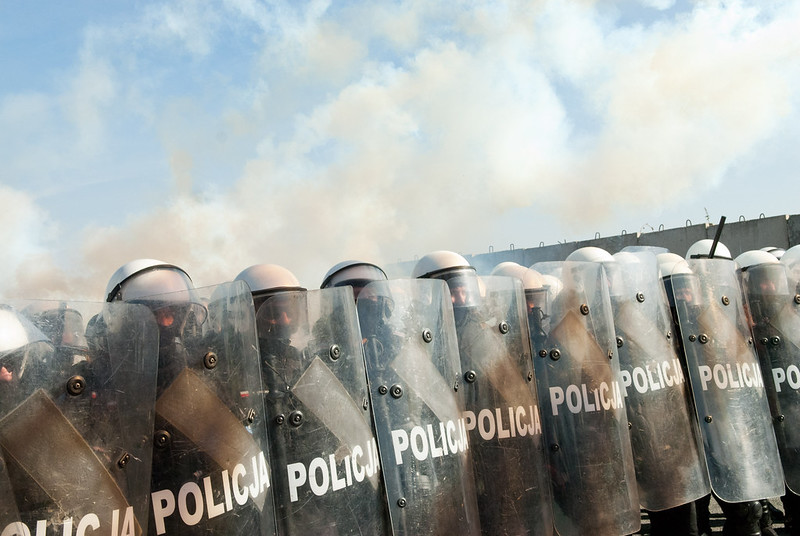 The exercise, held on a biannual basis, allowed for the practice of movement and technique in a crowd riot control situation. / DoD photo by Sgt. Angela Parady, U.S. Army/Released
Tweet
Share
Email

I recently was driving behind a pickup truck that sported a bumper sticker with a U.S. Marine Corps logo and these words: “When it absolutely positively has to be destroyed overnight.” That line got me thinking about policing—and the vastly different roles between the U.S. military and the nation’s civilian police forces.

The goal of the military obviously is to subdue a nation’s enemies. The U.S. military has engaged in many misbegotten exercises that try build nations rather than destroy them, but they rarely go as planned. That’s because military forces are not really trained to create court systems and hold elections. If they were, that bumper sticker wouldn’t even be mildly funny.

Since the start of the drug war in the 1980s and following the 9/11 attacks in 2001, our nation has increasingly blurred the distinction between the military and domestic police departments. Local police forces train their recruits as if they are patrolling the streets of Baghdad, and then equip them with surplus equipment from the latest wars.

This trend is dangerous and to some degree explains the frustrations that sparked national police protests. A Department of Justice report following a police shooting in Ferguson, Missouri, found that officers “demand compliance even when they lack legal authority” and “interpret the exercise of free-speech rights as unlawful disobedience, innocent movements as physical threats, indications of mental or physical illness as belligerence.”

The author obviously has not ridden along with law enforcement. His ignorance is astounding. Our streets have become like Bagdad. Speaking from experience.

The civilian(local, county and state) police need these weapons to fight the FBI, ATF and now the capital police.

As a retired Police officer and Chief of Police your man got it all wrong. The streets of America have become the streets war. Cops are killed in ambushes every month Riots and violence have become the norm. A government that is anti-cop and pushing an agenda that is getting cops killed show that cops are at war with criminals.