In a widely followed case, Marine Lt. Colonel Stuart Scheller received a relatively light sentence consisting of a formal reprimand and equivalent of $5,000 fine after pleading guilty to six misdemeanor violations of the Uniform Code of Military Justice (UCMJ). He was court martialed for posting viral social media videos in uniform criticizing the Pentagon’s senior leadership, including the Secretary of Defense, over their embarrassing handling of President Biden’s Afghan retreat.

In the videos Scheller bashed senior Pentagon leaders for their lack of accountability over catastrophic decisions. The Marine Corps was also sharply criticized for confining Scheller to the brig pre-trial for a week, despite the minor severity of his charges.

See below also part of Lt. Col’s Scheller’s Court Martial Plea statements where he pleads guilty to some counts and explains why he did what he did. 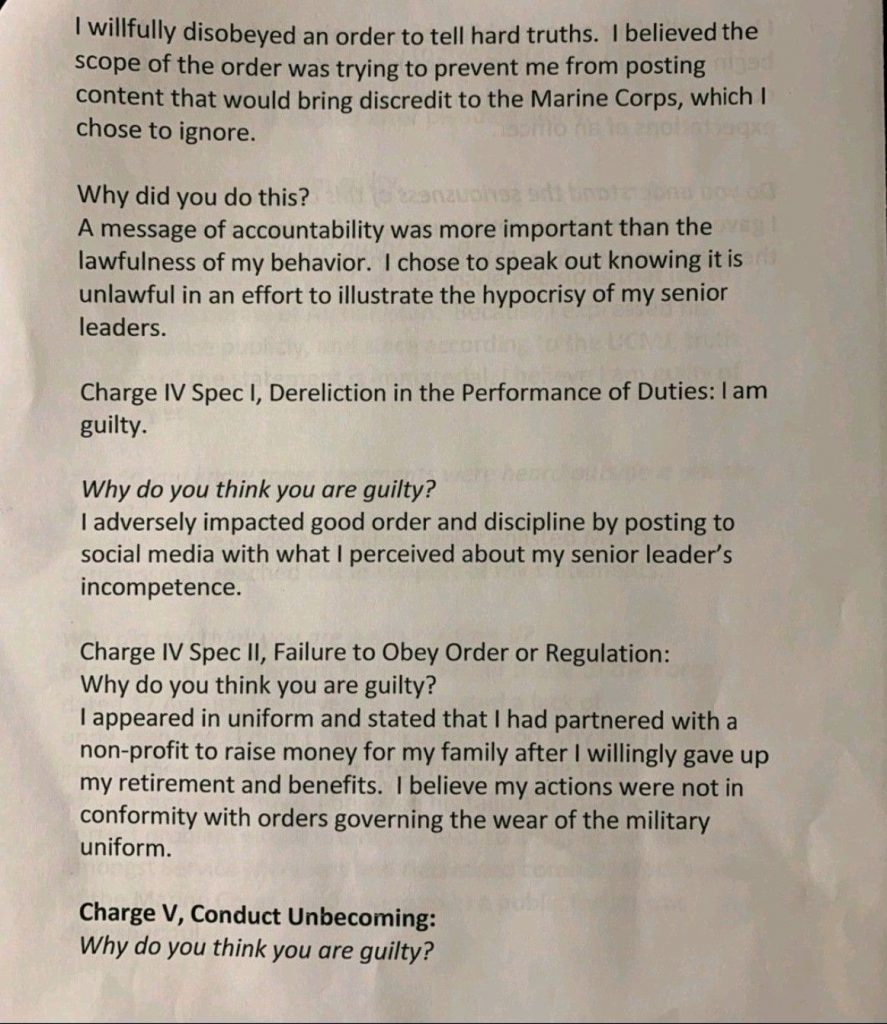 In a court martial proceeding that lasted less than an hour, Col. Glen Hines, the Marine Corps judge who decided Scheller’s sentence, rejected the prosecution’s requested punishment and sharply criticized the Corps’ handling of the case.

The Marine Corps Times reported that:

Hines said Scheller’s videos in their full context showed a man who appeared “to be in pain,” “confused” and “significantly frustrated,” rather than a rogue and potentially violent Marine, that his lawyers argued was depicted in the charge sheet.

The judge described alleged leaks to the press and the command’s pretrial confinement order as raising the “specter of unlawful command influence.” It was not officially argued or determined in court, however, whether senior Marine Corps leaders were responsible for the media obtaining these documents.

In a video of Lt. Col Scheller walking alone into the proceedings, wearing his Marine summer service Charlie uniform, the ‘accountability’ Marine appeared relaxed and said he felt ‘good.’

In addition to the monetary fine and letter of reprimand, Scheller will also resign his officer’s commission under the agreement, losing any pension and retirement benefits, and receive either an ‘honorable discharge,’ or a ‘general discharge under honorable conditions.’

This final part of his sentencing depends on Navy Secretary Carlos del Toro signing off on the character of the discharge.

The Marine Corps Times continued by stating that:

In a trial where post-sentencing time in the brig was not even an option, the command’s decision to lock Scheller up while awaiting trial was “a very rare thing,” Hines said. He also revealed that the Marine signed his plea agreement while in the brig.

“When senior leaders [or] certain people decide to take certain actions like leaking medical records, like putting somebody in pretrial confinement [when there is] no risk of flight, there should be consequences,” he said. ADN

SEMPER FI COULD NOT EXEMPLIFY COURAGE FINER THAN THIS. BIDEN, AUSTIN and MILLEY are 2 FACED. Lt. Col Scheller would make an Excellent Senatorial Candidate

JD reinstates criminal Andrew McCabes pension while this soldier gets his taken for speaking the truth. Two standards of justice anyone?

Seems there are always consequences for conservative views but none for Democrats!