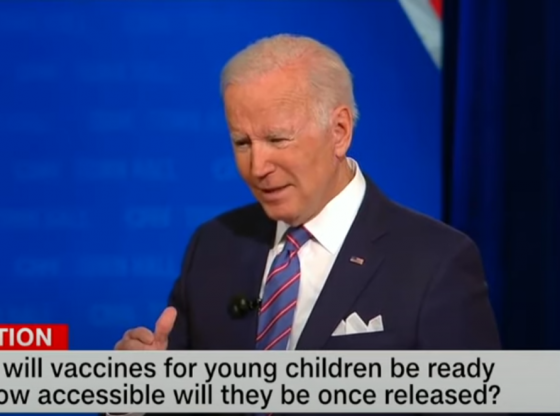 During a town hall discussion with CNN’s Anderson Cooper on Thursday night, President Joe Biden babbled incoherently at times while trying to justify COVID vaccine mandates. In one moment of clarity, when asked by Cooper whether first responders should be mandated to get the vaccines and fired if they don’t, Biden replied, “yes and yes.”

This, despite Cooper noting that as many as one in three police officers and first responders in major cities like Chicago, Los Angeles and Baltimore are refusing to comply with their city’s vaccine mandates.

In addition to Biden saying police officers and first responders should be fired from their jobs for refusing to take the COVID-19 vaccines, he rambled on saying:

By the way, I waited until July to talk about mandating, because I tried everything else possible. The mandates are working. All the stuff about people leaving and people getting … you have everyone from United Airlines to Spirit — all these airlines.  They’re — we’re not going to get all — 96, 97 percent of the people have gotten the vaccine. All the talk about all these folks who are going to leave the military if they were mandated — not true.  You got about a 90-something percent vaccination rate.

But Biden didn’t stop there, his rambling continued as he criticized those who express concerns about personal freedoms:

So there’s a — the idea is that — look, the two things that concern me — one, are those who just tried to make this a political issue. Freedom.  ‘I have the freedom to kill you with my COVID.’ No, I mean, come on.  Freedom? Number one.

Number two — the second one is that, you know, the gross misinformation that’s out there.  Like what they’re saying about my buddy Colin Powell — and he was my friend — who passed away.  ‘Colin Powell was vaccinated, and he still died.’ Well, he knew he had serious underlying conditions. And it would be difficult — he clearly would have been gone earlier had he not gotten the vaccine, had he not gotten the — the shots. But my generic point is: There’s so much misinformation.

Despite Biden’s claims that mandates were a last resort, the facts show otherwise. In August, within just days of the FDA’s approval for the Pfizer vaccine, Biden ordered a vaccine mandate across the entire U.S. military. This was followed quickly in September when Biden announced a vaccine mandate for federal employees and contractors.

Biden also announced the U.S. Department of Labor is developing a new regulatory plan forcing all businesses with 100 or more employees to get their employees vaccinated or face weekly COVID tests or penalties of up to $14,000 per violation.

According to Fox News, two dozen Republican states attorneys general have threatened to sue the Biden administration over the mandates. ADN

I want proof he really took the jab, I bet he didn’t. What vial was it from etc. oh….that’s privileged medical info right? What a slime he is. This non vaccine is not safe and to ignore the mountains of info surrounding this is significant. They say, well it’s within acceptable risk of side effects. Tell that to the single mother who ended up with both legs amputated post vax and the several thousands injured. I’m very tired of this regime and how it is systematically dismantling the America I grew up in.

He is Chairman Xi’s favored Manchurian Candidate! How dare anyone say a cross remark about Chao Bai Deng! You will be silenced!