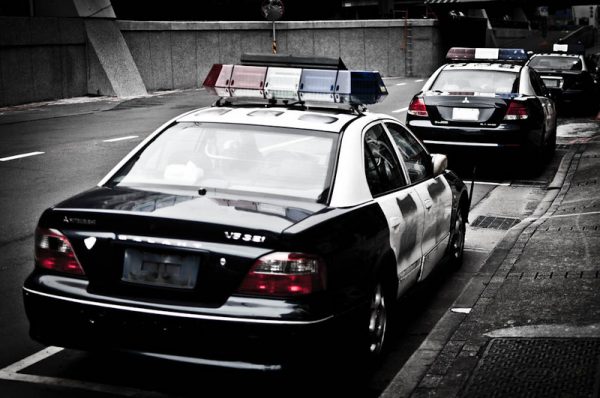 According to reports, Joshua Graham Rohrer was simply standing on a median near a Gastonia shopping center with his dog Sunshine on Oct. 13 when a 911 caller contacted police.

Rohrer deployed to Kuwait and Iraq from October 2004 to November 2005 with the Kentucky Army National Guard. He suffers from service-connected post-traumatic stress disorder, and his 2-year-old Belgian Malinois Sunshine was his Veterans Affairs-prescribed treatment.

Regarding the incident, the Army Times reported Rohrer as saying:

I was just standing there, waving at people, when this lady waved me over and offered me money. I was accused of falsely using my dog to get money from people and asking people for money but that’s not true.

Rohrer added that as soon as he took the money offered to him, the police drove up, “aggressively, with the lights on and everything.”

According to the Army Times, “Rohrer argued that he wasn’t doing anything wrong, and the officer on scene called for back-up. Police asked Rohrer to produce a valid state ID, which Rohrer said he didn’t have, stating that he only had a VA card.”

“The officer asked him for his ID,” Huffman said. “He wasn’t moving fast enough so he tried to reach into his pocket to get his ID. They slammed him up against the car and they put cuffs on him.”

That’s when Sunshine jumped up on the hood trying to help Rohrer. He said: “She was just doing her job, licking me and trying to calm me down,” Rohrer said. “The cops started yelling at her and me, telling me to get her to settle down but they wouldn’t allow me to physically get control of her.”

Rohrer said Sunshine nipped at one of the officer’s ankles as she was hopping down from the hood of the car, prompting the officer to tase her.

Huffman said Sunshine ran to a nearby store with one of the taser prongs dangling off her body while police took Rohrer to the back of the car and “slammed him on the pavement.”

“It was really traumatizing,” Conley said. “I’ve never seen anything like that.”

Rohrer was arrested on charges of solicitation and resisting arrest.

As he was taken away by police for booking, The Army Times notes Rohrer said he begged the officers to let Sunshine come with him. He reportedly cited a North Carolina statute that affords people with disabilities the right to keep their service dogs with them, especially in cases where the individual’s health is at risk.

“They laughed at me,” he said. “I begged them to bring her to me or to give her to an officer to take with them but they wouldn’t listen, they didn’t care.”

Rohrer never saw Sunshine again. While his friend and fellow veteran Dave Dowell was able to get his hands on the service dog that night, she later slipped her leash and ran away while Rohrer was still in jail.

He was released the next day after posting bail and facing more insensitive treatment by the police, saying they laughed at him and continually told him how horrible of a person he was, Rohrer claimed. He immediately began searching for his dog. After nearly two days, Sunshine was found in nearby Shelby, where Dowell lives.

She had been hit by a car and killed.

After learning of his dog’s death, Rohrer had a PTSD episode and tried throwing himself in front of cars. He had to be treated at the VA Medical Center in Asheville for injuries suffered during his breakdown.

The Gastonia Police Department told Military Times that although Rohrer will go to court for the charges against him, the department is now looking into the incident to “determine if the conduct of our officers was appropriate.”

The Army Times noted that Rohrer’s case was recently accepted by the Veterans Justice Outreach program, which works “to identify justice-involved Veterans and contact them through outreach, in order to facilitate access to VA services at the earliest possible point.”

While the program doesn’t provide legal counsel, it points veterans in the right direction.

A Facebook group – “Support Joshua Rohrer and Sunshine Rae” announced that a protest will take place in front of the Gastonia Police Department Oct. 29. ADN

This conduct if told truthfully about arrest is so sad. If his story pans out I hope a lawyer pickup his case pro bono an defends him. I mean he has PTSD an served for American interest overseas an lost also another animal service member to these actions. My heart goes out to this vet.

It becomes much harder to support your local police when they act like this. Hope the all get suspended or fired and the city gets their butts sued off.