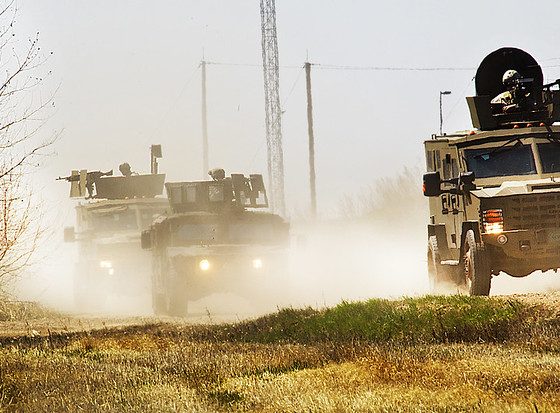 Climate change is a risk to national security, the Pentagon says. In a report last week, the Pentagon found that “increasing temperatures; changing precipitation patterns; and more frequent, intense, and unpredictable extreme weather conditions caused by climate change are exacerbating existing risks” for the U.S.

The F-35 is one step closer to carrying nuclear bombs. What’s next? Some disagree that nuclear-armed fighter jets are still a reliable deterrent in a post-Cold War world.

Pentagon reexamining how it addresses chem-bio threats. The ongoing COVID-19 pandemic quickly and ferociously brought home the dangers and perils posed by biological threats and has prompted the Defense Department to bolster its ability to combat them in the future.

Republican lawmakers question vetting standards for Afghans brought to US. Some evacuees who failed to pass extra screening checks are being temporarily held in Kosovo.

Why the Hazara people fear genocide in Afghanistan. In the aftermath of the withdrawal of international troops from Afghanistan, violence against the Hazara population has escalated. With a long history of persecution, including by the Taliban, the Hazaras are right to fear a genocide.

Taiwan confirms US military presence, says defending island is vital for democracy. Taiwan’s President Tsai Ing-wen confirmed that American troops have been training the Taiwanese military, as tensions between Beijing and the self-governing island intensify over China’s fears of Taipei’s evolving relationship with Washington.

With a wink and a nod, Japan has an aircraft carrier again. When Navy Secretary Carlos Del Toro returned from his trip to Japan, he fired off a tweet that touted his tour of that country’s “Aircraft Carrier Izumo.” It was a short comment that recognized an important new naval reality for the longtime ally.

US embassy in Moscow dwindling to “caretaker presence,” US official says. The U.S. State Department is getting to the point of being able to maintain only a “caretaker presence” in Russia in the face of a deep downturn in diplomatic relations between Washington and Moscow, a senior department official said on Wednesday.

YIPPEE? Iran to return to nuclear deal talks next month. Tehran will return to negotiations on reviving the 2015 nuclear deal by the end of November, its chief negotiator said Wednesday.

Turkey reinforces Syria troops for possible attack on US ally. Turkey deployed hundreds more troops in northern Syria overnight in preparation for a long-suspended offensive against American-backed Kurdish forces, according to two officials, a move that could help President Recep Tayyip Erdogan shore up flagging domestic support and put pressure on the U.S. and Russia to rein in the Kurdish troops.

WEDNESDAY PDB – Texas Massively Expands Guard Border Mission, Terror Attacks from Afghanistan in Six Months? Iran-US-Syria – the Next War? Say No to F-15EX – Yes to More Stealth Fighters, Can China Take a Bite Out of Taiwan? Marines Fly Jets with Harpoon Anti-Ship Missiles in Pacific
US Troops Active in Taiwan

I would truly love for Comcast to stop censuring the email photos..