US Troops Active in Taiwan

US Troops Active in Taiwan 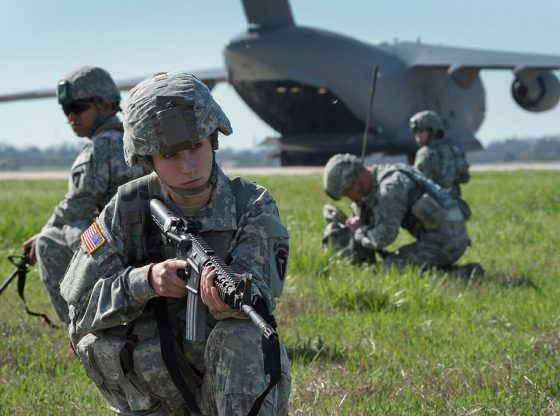 Spc. Angela Warden of the 1st Battalion, 143rd Infantry Regiment (Airborne), provides security on the airfield after unloading from a C-17 “Globemaster” during a training mission at North Texas Regional Airport in Grayson County. The Austin-based Soldiers conducted the Assault Landing training at the civilian airport near the city of Sherman on March 28th, 2015. (36th Infantry Division photo by SSG Mark Scovell)

Taipei, Taiwan (CNN) – The leader of Taiwan, the island thrust into the center of rising tensions between the United States and China, said the threat from Beijing is growing “every day,” as for the first time she confirmed the presence of American troops on Taiwanese soil.

Speaking with CNN in an exclusive interview Tuesday, President Tsai Ing-wen said Taiwan, which is located fewer than 200 kilometers (124 miles) away from China’s southeastern coast, was a “beacon” of democracy that needed to be defended to uphold faith worldwide in democratic values.

“Here is this island of 23 million people trying hard every day to protect ourselves and protect our democracy and making sure that our people have the kind of freedom they deserve,” she said.

“If we fail, then that means people that believe in these values would doubt whether these are values that they (should) be fighting for.”

How about putting a battalion of Marines there over a slow period, dressed in civilian clothing when they arrive. Have another battalion of air force support personnel arrive the same way. This could be done with other branches as well.

We should have the testies to recognize Taiwan as a country. If we did that other countries would fall into place.