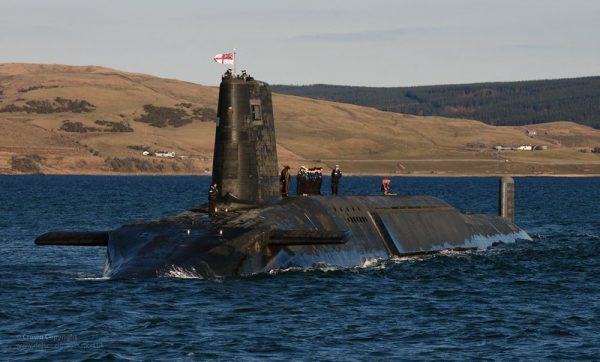 HMS Victorious was the second of the four ballistic missile submarines to emerge from the Devonshire Dock Hall in Barrow, where she was officially 'launched' on 29 September 1993. Based at Clyde Naval Base, HMS Victorious' is continuing the Royal Navy's proud record of over 40 years of uninterrupted nuclear deterrence, as at least one of the four 'bombers' is on patrol at any time. / Photo by Defence Imagery via Flickr
Tweet
Share
Email

As a tiny country long surrounded by dangerous adversaries bent on its destruction, Israel quickly pursued a secret nuclear weapons program in the 1950s as a final line of defense. Despite its conventional technological advantages and battlefield prowess, Israel saw the need for nukes to guard against everything from defeat in conventional warfare to deterring nuclear, chemical, and biological warfare attacks.

By the late 1960s the U.S. intelligence community assessed Israeli nukes as “probable,” and U.S. efforts to slow its nuclear program and get Israel to join the Nuclear Nonproliferation Treaty went nowhere.

Finally, in September 1969, Nixon and Israeli Prime Minister Golda Meir reportedly reached a secret agreement that the United States would cease its demand for inspections and Israeli compliance with antiproliferation efforts, and in return Israel would not declare or test its nuclear weapons.

Israel didn’t have long to wait for its first nuclear crisis. The 1973 Yom Kippur War saw Arab armies achieve strategic surprise, sending Israeli ground forces reeling in both in the Sinai desert and the Golan Heights. Israeli nuclear weapons were placed on alert and loaded onto Jericho I surface-to-surface missiles and F-4 Phantoms.

Fortunately, decisive Israeli counter offensives were able to regain control on both fronts, and the use of nukes was not required.

Israel still does not confirm nor deny having nuclear weapons, but experts believe the country has between eighty and 200 nuclear weapons. This is fewer than secondary nuclear powers such as France, China and the United Kingdom, but still a good number since – for now – its adversaries have none .

19 fortyfive reminds us that in a private email leaked to the public in September of 2016, former U.S. secretary of state and retired general, Colin Powell alluded to Israel having an arsenal of “200 nuclear weapons.”

Israel is also one of the few countries to have a functioning nuclear “triad” of land, air, and sea-based nuclear forces to deter surprise nuclear attack and guarantee a viable second strike capability to hit back.

What does Israel’s triad consist of? 19fortyfive explains that while the venerable old F-4 Phantom was probably the first aircraft in the Israeli Air Force capable of carrying a first generation nuclear device:

A new, smaller generation of nuclear gravity bombs likely equips F-15I and F-16I fighters. While some might argue a gravity bomb is obsolete in light of Israeli advances in missile technology, a manned aircraft allows a nuclear strike to be recalled right up to the last minute.

Israel’s first land-based nuclear weapons were based on Jericho I missiles developed in cooperation with France. Jericho I is believed to have been retired, replaced by Jericho II and -III ballistic missiles. Jericho II has a range of 932 miles, while Jericho III, designed to hold Iran and other distant states at risk, has a range of at least 3,106 miles. The total number of Israeli ballistic missiles is unknown, but estimated by experts to number at least two dozen.

Like other nuclear-armed nations, the Israeli Navy has reportedly deployed nukes to what is generally agreed to as the most survivable seagoing platform: submarines. Israel has several German-built Dolphin-class submarines, which experts believe are equipped with nuclear-tipped cruise missiles. The cruise missiles are reportedly based off the Popeye air-to-ground missile or the Gabriel anti ship missile.

While the U.S. and Iran haggle over restarting the failed 2015 Obama-Biden nuclear deal (Joint Comprehensive Plan of Action) ended by President Trump, all should be reminded that Israel has its own way to ensure its security and survival – Lots of nukes – and the ability to deliver them. ADN

Right On Israel. The Jews are the chosen people of God and will survive the war of the worlds, or any war for that matter as is written in the Holy Scriptures. So, as far as I am concerned I’m on their side with Jesus Christ as my Saviour and path into Heaven.

The Jews are not yet on their boat, but as is written in Scripture, Every knee shall bow and every tongue confess the Jesus Christ is LORD.

Come on lets go to war get this shit over with, no more talking

Rather a foolish thought!