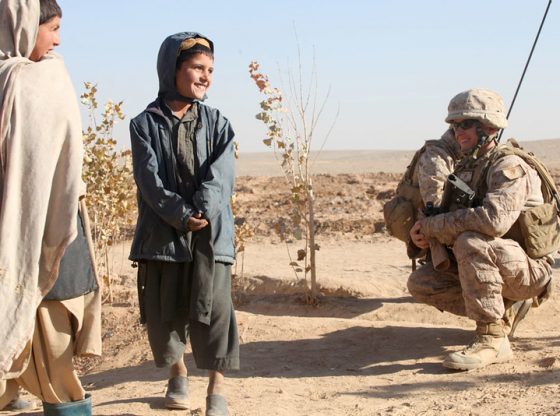 Staff Sgt. Cary Anderson, a team leader with Lima Company, 3rd Battalion, 25th Marine Regiment, meets with children during a joint patrol in the village of Habibabad, Dec. 13. / Photo by the Marine Corps on Flickr

Since before the final disastrous Biden retreat from Afghanistan on August 31, the State Department (State) has been systematically removing from public view or reacting over 100,000 pieces of online content on Afghanistan, ostensibly to protect Afghan identities from Taliban retribution.

State made a similar request to the Defense Department, spokesman John Kirby confirmed Monday, resulting in the removal of 124,000 images and 17,000 videos from the DVIDS site.

Speaking at the Military Reporters and Editors conference, John Sopko told reporters that the State Department has requested some reports be taken down from SIGAR’s site, or some reports redacted. He added:

As we report in today’s quarterly report, shortly after the fall of Kabul, the State Department wrote to me and other oversight agencies requesting that we, quote-unquote, temporarily suspend access to all of our audit inspection and financial reports.

The protection of Afghans and legitimate risk of harm is not an issue to quibble over, and something our agency is respected over the 10 years that I’ve been there. But despite repeated requests, the State Department was never able to describe any specific threats to individuals that were supposedly contained in our reports. Nor did State ever explain how removing our reports now from public dissemination would possibly protect anyone, since many of those reports were years old, and already extensively disseminated worldwide.

Military Times reported Sopko as saying that “he initially accepted the request and pulled down reports, at the height of the evacuation, thinking the request would be temporary. But recently, he added, State sent him another letter, requesting another 2,400 items to remove.” It added:

One of the requests, he said, was to remove any mention of Ashraf Ghani ― the Afghan president who escaped as the Taliban closed in on Kabul ― from the SIGAR site.

“Now, I’m sure President Ghani may wish to be excised from the annals of history, but I don’t believe he faces any additional threat, or is there any threat to any other Afghan by mentioning his name in our reports,” Sopko said. ADN