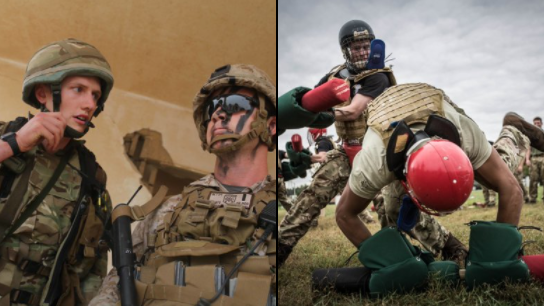 Photo of US Marines training with British Royal Marines. / Screenshot from the Marines on Twitter

Social media has been buzzing with reports that America’s Marine cousins from Great Britain, the Royal Marines, ‘decisively defeated’ the U.S. Marines during a recent major exercise in the desert training base of 29 Palms California.

U.S. Marines, founded in 1775 as British ‘Continental Marines’ trace their lineage to their older Royal British cousins founded in 1666.

I worked with Royal Marines during my time in the UK, and like most American Marines was very impressed. While the Brit Marines envied our much larger force and combined arms capabilities and equipment (or kit, as they call it), their continued focus on being commandos was what we admired.

And this commando focus may have just paid off.

Royal Marines relished in the fact that the U.S. Marines reportedly asked for a ‘reset’ to the exercise part way through, claiming this signified the Americans had surrendered.

The Brits quickly announced their “victory.” A tweet on Saturday by 40 Commando, a unit of the Royal Marines, said UK forces triumphed in “an epic close quarters finale.”

According to The Telegraph, Exercise Green Dagger involved the two close allies facing off against each other in a competition where both sides were tasked with taking out each other’s assets.

The Royal Marines “dominated” the U.S. in the five-day simulation, it said, with U.S. forces reportedly asking for a “reset” less than halfway through.

At one point, the Royal Marines had taken out or disabled almost all the US assets, The Telegraph wrote.

The Royal Navy told Business Insider that the victory was decisive.

“Throughout this deployment our focus has been on integrating game-changing capabilities from across the commando force to deliver disproportionate effect in the face of a free-thinking peer adversary,” Lt. Col. Andy Dow, the commander of the British force, told The Telegraph.

However, the U.S. Marine Corps later pushed back politely by saying this wargame is not designed to determine winners or losers.

The simulated encounter between the two nations was not designed to have “winners,” the US Marine Corps said in an emailed statement to Business Insider.

“Exercise scenarios are adjusted as needed to assist commanders in meeting training objectives,” the email said.

“This exercise does not provide an opportunity to ‘surrender,’ ‘keep score,’ or ‘reset.’ The objective of the exercise is to heighten unit performance and increase readiness.”

U.S. Marines are fortunate to train with allies and partners all over the world, every day – including our brothers and sisters in the @RoyalMarines. As fellow soldiers of the sea, we have a unique and proven bond shared by those who have earned the title “Marine”. pic.twitter.com/4yCufoZceU

The elite, but smaller, Dutch marine corps, the world’s oldest, founded in 1665, was also involved in the training, according to the Royal Navy.

Whether the Brits truly “defeated” the Yanks in this exercise is probably less important than the incredible training both sides received.

Still, maybe the U.S. Marines can learn a few things from their commando cousins.

That is, after all, the entire point of the exercise. ADN