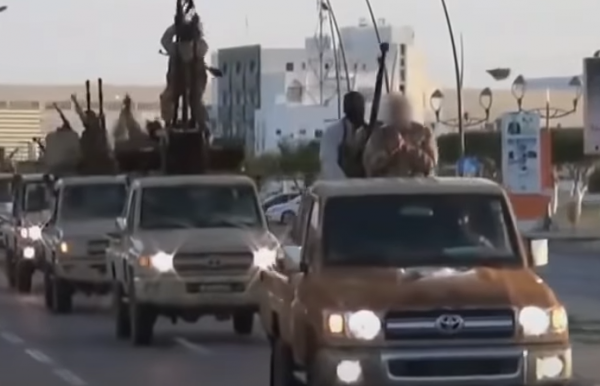 ISIS Members in the backs of Toyota Trucks in a convoy. / Screenshot from ISIS Video obtained by NBC
Tweet
Share
Email

And Toyota trucks seem to be the platform of choice for warlords, armed militias, paramilitaries and even police forces worldwide.

The term ‘technical’ appears to have originated in Somalia during conflicts in the 1980s or 1990s. One version has it that since non-governmental organizations (NGOs) were barred from bringing their own private security, they hired local gunmen to protect them. They got around the rules by using money defined as “technical assistance grants” to pay them.

Gradually, the term broadened to include any vehicle carrying armed men.

Another version says that the term was first used in Somalia in the 1980s, after engineers from Russian arms manufacturer Tekniko mounted weapons on trucks for the Somali National Movement during the Somaliland War of Independence.

Sometimes they are also referred to as battlewagons or gunwagons.

Either way, Toyota trucks became so popular for combat in North Africa in the 1980s that they were often employed by both sides. There was even a ‘Toyota War’ fought in the late 80s between Libya and Chad, with the Libyans using the Toyota Hilux and the Chadians opting for the Toyota LandCruiser.

But why Toyota? Chris, who own the page, says: “ask any veteran of the last 50 years and they’ll tell you these Japanese automobiles are vehicles of war.” He adds, its’s about “Reliability and availability,” and “They work — and when they don’t, parts are widely available.”

But it is more than that. According to Military Times:

Toyota’s DNA, he said, is based upon military vehicle designs. The staying power of Toyota from the Korean War through contemporary conflicts, however, comes down to its adaptability.

How did Toyota come into the modern military vehicle business? Well, with help from the United States.

Toyota, says Chris, received the design for the Model BM truck and the Willys Jeep from the U.S. Army after WWII as part of the Korean War effort. Eventually, Toyota’s version of the Jeep morphed into what is known as the modern day ‘LandCruiser.’”

So, these ubiquitous Toyota technicals are descendants of the Willy Jeep and Model BM truck of U.S. WWII fame. In a way, they were all originally made in America. ADN

[…] I wrote about here,‘technicals’ are “open-backed civilian pickup trucks or other four-wheel-drive […]