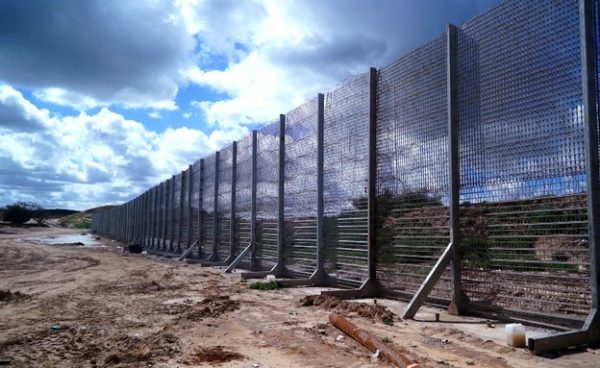 NETIV HA’ASARA — Standing in the shadow of a 30-foot-high concrete wall, top defense officials announced Tuesday that Israel had completed construction of a massive barrier running the length of the Gaza Strip both above and, critically, below ground.

The NIS 3.5 billion ($1.1 billion) project has taken over three years to complete and is meant to end the threat of cross-border attack tunnels from the Palestinian enclave, which the Strip’s Hamas rulers have utilized to deadly effect.

“This barrier, a creative, technological project of the first order, denies Hamas one of the capabilities that it tried to develop and puts a wall of iron, sensors and concrete between it and the residents of the south,” Defense Minister Benny Gantz said at the ceremony on Tuesday afternoon.

Construction of the barrier was a massive industrial undertaking, requiring some 1,200 workers, the removal of 330,000 trucks’ worth of sand, dirt and rocks, two million cubic meters of concrete and enough rebar that if laid out in a single line would reach Australia, according to Brig. Gen. Eran Ofir, who oversees construction of defensive barriers for the Defense Ministry.

Bravo!!! Now why can’t WE do this; as Trump suggested. The funding is already approved, but the Biden administration nixed the project; along with the Keystone pipeline.
Biden needs to be put out to pasture; along with Cameltoe Harris; the most useless VP in American history.They are holding America back. Perhaps this is what the Globalist cabal wants.

No perhaps to it. It is without a doubt what the globalist cabal wants. Bring the U.S. to it’s knees so they can control the world. We are the impediment to that end.

MY HEARTFELT CONGRATULATIONS, ISRAEL!!
Every country in the world has the right — and the duty — to defend itself. I guess this administration doesn’t agree. That’s why we have such a critical situation on our southern border. 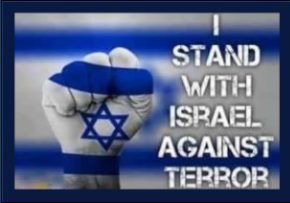 Good news from Israel. Their border was is complete and totally secure. Now if a Hamas terrorist crosses the border illegally, his/her intent is very evident and he/ she should be killed on sight.
God bless the wonderful People of Israel!!