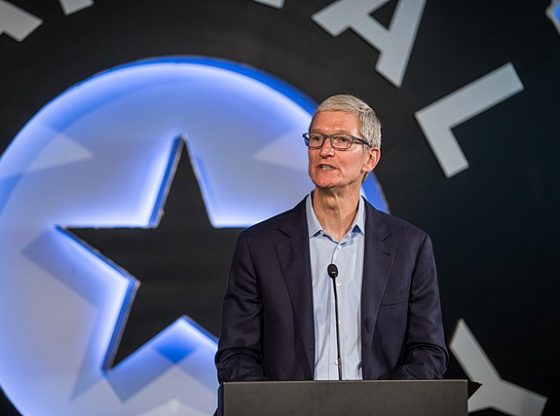 According to internal Apple documents obtained by news outlet The Information, Apple CEO Tim Cook made a secret $275 billion deal with communist China to appease Chinese officials and improve Apple’s business in the repressive, totalitarian country.

The report published by The Information on Tuesday, shows Cook traveled to China in 2016 to bolster Apple sales which were declining in the country.

The Daily Mail reported that Cook “personally met with Chinese officials in 2016 and forged a secret $275 billion deal with” China. Cook’s pledge to invest the $275 billion “into the local economy over a five-year period in exchange for Beijing allowing the iPhone maker to freely do business on the mainland.”

Communist Party officials and Cook reportedly reached a “1,250-word ‘memorandum of understanding,’” which involved Apple agreeing “to a series of concessions in exchange for regulatory exemptions from the Chinese government.” This news, originally reported by The Information, comes as China commits cultural genocide against Uyghur Muslims.

Business Insider noted that “a May report from The Information found that seven Apple suppliers in China had links to forced labor programs, including the use of Uyghur Muslims from the Xinjiang region.”

According to The Hill:

Cook signed a five-year agreement with Chinese officials, placating the government and preserving the business relationship, according to the report.

The iPhone and iPad maker agreed to build new retail stores, renewable energy projects and research and development centers. The tech company also promised to work more closely with Chinese companies and universities, buying components and parts from Chinese suppliers and collaborating with the nation’s colleges and researchers.

Following the agreement was a $1 billion investment from Apple to Uber rival Didi Chuxing in May 2016.

Today, Apple is the No. 1 cellphone maker in China. The company makes billions of dollars in revenue in China and even set a record for quarterly revenue last June. Apple opened a new store in September in Changsha, and the company has been building research and development centers in China.

Apple has been criticized for its close relationship with China and reliance on the country for labor and manufacturing.

A number of American companies have decided to pull services from the Asian country because of its authoritarian tendencies and increased censorship of products and people. Most recently, Microsoft announced that it would shut down its social networking service LinkedIn in China.

Meanwhile, Apple’s new obsession to kowtow to the communist regime since the 2016 secret deal, only gets worse. In 2019, Apple removed an app, called HKmap.live, from the app store after it received criticism from the Chinese government. Apple parroted the CCP line it had been used to “threaten public safety.”

In fact, the app is used by democracy activists in Hong Kong to track the locations of protesters and communist security forces. ADN

US Sanctions European, Latin American Groups and Individuals for Ties to Organized Crime
Time to End CCP China’s Abuse of WTO Membership to Help it Conquer the World

Trump should have put tariffs on all Apple products coming into the U.S. from China to even out their potential profit margins. Then they may have considered moving to a more profitable country like the U.S.