CLASSIFIED REPORT – US May Send More F-22s, F-35s and B-2 Bombers to Face China – But Much More Needed

Home /China Threat/CLASSIFIED REPORT – US May Send More F-22s, F-35s and B-2 Bombers to Face China – But Much More Needed

CLASSIFIED REPORT – US May Send More F-22s, F-35s and B-2 Bombers to Face China – But Much More Needed 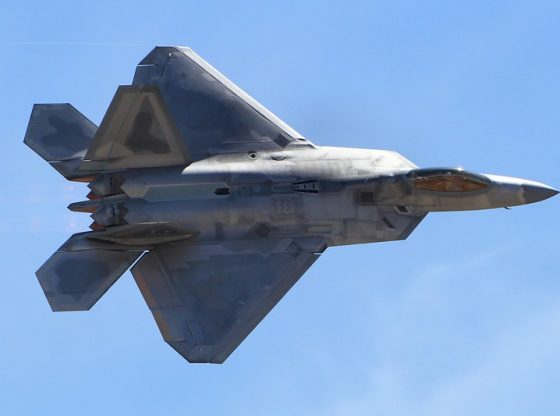 An F22 Raptor at an Airshow / Photo by Airwolfhound on Flickr

Multiple sources are reporting that the Pentagon may be sending additional military assets closer to China in the Indo-Pacific theater. Most of these added assets are expected to be based in Guam and Australia.

This according to the Pentagon’s latest report.

The classified Global Posture Review is designed to help advise where to position various forces across the globe over the next two to three years.

According to this review, the assessment plans for improvements to the airfields and other infrastructure at U.S. bases in Guam and Australia, augmenting a previously announced deployment of fighter and bomber aircrafts, defense officials said.

According to the EurAsian Times, this U.S. military expansion means that the United States is expected to “send extra fighter jets including F-22 Raptors, F-35 Lightning II, B-2 stealth bombers to Australia to deter possible Chinese military aggression and threats from North Korea.”

the increased aircraft rotations in Australia are an indication that the U.S. is moving forward with the strategy as a major pillar of its tougher defense posture to deter China. … The U.S. military’s ability to act freely in Asian waterways and airspace has been hindered by China’s growing arsenal of missiles directed at U.S. bases in Japan, Guam, and warships.

19fortyfive reported that Undersecretary of Defense for Policy Mara Karlin told reporters at the Pentagon that “You’ll see new rotational fighter and bomber aircraft deployments in Australia.” The rotational deployments are expected to include bombers that are capable of carrying anti-ship missiles to deter the ever-growing Chinese warships in the region.

While the U.S. strategic shift to face China nominally began under the Obama administration, it only gained true resonance under President Trump which named China as a ‘strategic competitor’ in 2018. As the Stars and Stripes reported:

…that concept, nicknamed the ‘Pacific Pivot’ during former President Barack Obama’s administration, was supported in the [Trump] 2018 National Defense Strategy, which listed China as the ‘strategic competitor’ with the United States because of its rapidly growing military, operations to influence other nations and ‘predatory economics’ used in an attempt to dominate the Indo-Pacific region.

Unfortunately, these deployments are not nearly enough to face the growing China threat or fulfill President Biden’s stated commitment to fully counter China.

While some details about the repositioning of military capabilities are classified and others have been previously announced, defense specialists said the review’s lack of sizable adjustments to military forces in Asia shows the challenges the U.S. faces in rebalancing resources to confront China while maintaining other global commitments. ADN