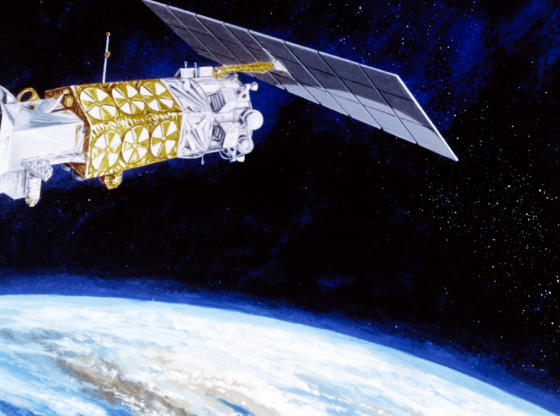 Artist's concept of the Defense Meteorological Satellite Program 5D-2 satellite in orbit, with the Earth in the background / Photo via AFSC

ALLIES OPPOSE BIDEN ‘NO FIRST-USE’ NUKE IDEA – Defense bill orders Biden nuclear briefing for Congress on probing allies. Congress would get a window into pleas from allies to the Biden administration not to change policy on the use of nuclear weapons under language in the new compromise defense policy bill.

AND? Retired Army colonel circulated proposal to challenge the 2020 election. A retired U.S. Army colonel who circulated a proposal to challenge the 2020 election, including by declaring a national security emergency and seizing paper ballots, said that he visited the White House on multiple occasions after the election, spoke with President Donald Trump’s chief of staff “maybe eight to 10 times” and briefed several members of Congress on the eve of the Jan. 6 riot.

BUT DIDN’T BIDEN END ‘FOREVER WARS’? Anti-ISIS coalition shifts focus to Africa as Iraq combat mission ceases. The U.S. and its allies are stepping up efforts to counter the Islamic State group in Africa as U.S. forces wind down their combat role against ISIS in Iraq.

Refugee aid groups in Washington region overwhelmed by Afghan caseloads. After scaling back operations during the Trump era, resettlement groups are now scrambling to keep up with the Afghan caseload as U.S. military bases prepare to release thousands more evacuees by February.

US, Australia, Japan to fund undersea cable in Pacific. The US and its Indo-Pacific allies are concerned that cables laid by the People’s Republic of China could compromise regional security. Beijing has denied any intent to use commercial fibre-optic cables, which have far greater data capacity than satellites, for spying.

Congress must do more to stop China’s military-industrial spying on US campuses. A new report from the Foundation for Defense of Democracies details how China-sponsored Confucius Institutes at campuses across America facilitate Beijing’s espionage.

BIDEN WEAKNESS – Despite appeals from Ukraine, Biden admin holds back additional military aid to Kyiv amid diplomatic push. A source familiar with the matter, however, said there are other options for further aid to Ukraine, including a much larger package in the event of further incursion by Russia.

TOKEN AID – US small arms and ammo arrive in Ukraine as Pentagon details troops to train country’s military. Part of a $60 million security assistance package, including small arms and ammunition, was delivered to Ukraine on Thursday, according to a State Department official in the Bureau of Political-Military Affairs, but a final delivery containing four counter mortar radars is still scheduled for early next year.

TOUGHER THAN BIDEN? G7 warns Russia of ‘massive’ consequences if Ukraine invaded. The Group of Seven economic powers told Russia on Sunday to “de-escalate” its military buildup near the Ukrainian border, warning that an invasion would have “massive consequences” and inflict severe economic pain on Moscow.

FROM TRUMP TO BIDEN – Gulf Arab states that opposed the Iran nuclear deal are now courting Tehran. Persian Gulf countries that once vociferously opposed the nuclear deal with Iran now say they support its revival, even as they have embarked on their own efforts to engage with Tehran during a period of uncertainty about U.S. staying power in the region.

FUTURE ICBM? Satellite images, expert suggest Iranian space launch coming. Iran appears to be preparing for a space launch as negotiations continue in Vienna over its tattered nuclear deal with world powers, according to an expert and satellite images.

Russia showed it can attack. Is US Space Force ready to defend? Russia’s anti-satellite missile test has raised calls for the United States and its allies to push for international norms to ban such tests.

Air Force would keep B-1 bombers until B-21s arrive, under NDAA. Congress would press the pause button on the Air Force’s effort to retire B-1B Lancer bombers until the B-21 Raider replaces them under the fiscal 2022 National Defense Authorization Act.