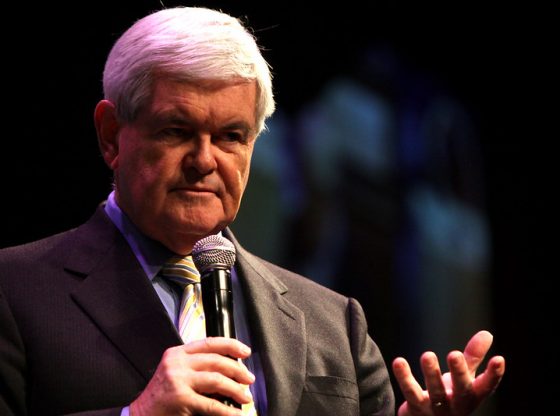 Speaker of the House Newt Gingrich speaking at the Western Republican Leadership Conference in Las Vegas, Nevada. / Photo by Gage Skidmore via Flickr

In an impassioned essay, former Speaker Newt Gingrich warns that America is headed toward a ‘catastrophic defeat’ in any conflict with communist China. Noting various examples of China’s growing power and U.S. acquiescence, regularly reported by ADN, Gingrich concludes that a dramatic national overhaul in the U.S. approach to China is needed to stave off this defeat.

Gingrich blames American corporations for much of the rot in U.S. policy toward China. Wealthy American companies are aiding and abetting the enemy while undermining the United States.

…look at the giant, wealthy American companies that already kowtow to the Chinese Communist Party’s demands and adjust their language and behaviors to placate Beijing.

After pressure from China, Disney removed an episode of “The Simpsons” from its streaming services in Hong Kong over a reference to the 1989 Tiananmen Square massacre. Nike and Coca-Cola lobbied against legislation to ban imports of goods made with forced labor in China. JPMorgan Chase has expanded its business in China—despite known, serious data security and national security risks. And remember the turmoil when Houston Rockets General Manager Daryl Morey tweeted support for democracy in Hong Kong. The NBA and players went into a tailspin of shameless apology and censorship on China’s behalf. It was disgusting.

Some American billionaires have made so much money in collaboration with Communist China that they prioritize padding their pockets over American values and national security interests.

Gingrich also emphasizes in the Epoch Times that “The Pentagon and intelligence community’s distracting focus on creating a woke force rather than a war-winning force is further weakening America.”

All this while a real war with China may be looming just over then horizon. Gingrich adds:

According to The Guardian, now retired Admiral Philip Davidson, who was the 25th Commander of the United States Indo-Pacific Command, said in March that a serious fight over Taiwan could come in the next six years.

“I worry that they’re [China] accelerating their ambitions to supplant the United States and our leadership role in the rules-based international order … by 2050,” Davidson said

Gingrich notes various classified wargames where the U.S. loses to China which has been devouring our military literature for decades and knows our playbook better than we do.

Vice Chairman of the Joint Chiefs of Staff Gen. John Hyten warned of one major exercise in a July conference: “Without overstating the issue, it failed miserably.”

Hyten explained that the wargame, which simulated a conflict with China over Taiwan, involved an adversary which had studied American conflict and warfighting for two decades.

In this wargame China “just ran rings around us. They knew exactly what we were going to do before we did it, and they took advantage of it.”

The most telling example noted by Gingrich is described by James Kitfield in Yahoo News in March. This one is “a highly classified simulated conflict with China which started with a Chinese biological weapon attack, continued with a massive invasion disguised as a routine exercise, and culminated with devastating missile strikes against our Indo-Pacific bases and warships and Taiwan itself. Needless to say, America lost that one, too.”

We need a full-blown investigation into the requirements for victory over China—and a commitment to undertake every reform needed in defense, education, capital markets, supply chains, manufacturing, and other areas to ensure American safety and freedom.

Anything short of a complete rethinking of our capabilities and the challenge of the Chinese Communist Party’s system-wide effort to become the world’s dominant superpower may well lead to our defeat in a much shorter time than anyone thinks possible. ADN

[…] China. Noting various examples of China’s growing power and U.S. acquiescence, regularly reported by ADN, Gingrich concludes that a dramatic national overhaul in the U.S. approach to China is needed to […]