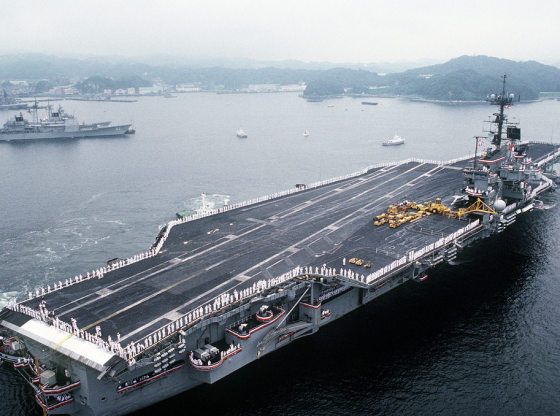 In late 2019 the Japanese government purchased Mageshima Island – three square miles of volcanic rock on the edge of the East China Sea – from a private Japanese company to use as a Japanese Self Defense Force (SDF) base and military airfield for U.S. military aircraft. The uninhabited island already has two intersecting unpaved runways that were previously abandoned.

The island was identified as a potential permanent site for American carrier landing practice under a 2011 agreement with Japan.

#WorldWarThree: @Japan buys ‘Mageshima’ island to challenge growing #ChinaThreat in #EastChinaSea. Japan to build a military base on the strategic island to better protect its interests in the region. Last year, China violated its maritime limits 998 timeshttps://t.co/1aidUu3fKG pic.twitter.com/djyBBtSKoy

According to CNN: “The Japanese government said the runways will be paved and used for US Navy and Marine Corps planes to simulate aircraft carrier landings, though [at the time] it did not give a time frame in which that could be accomplished as the deal still needs to be finalized.”

New base could be used to defend the Senkaku Islands, which are the focus of a territorial dispute with #Chinahttps://t.co/rcDa6auL7k

However, more recently, Japan has rapidly accelerated its plan.

But once suitable facilities are constructed, the island could also become a permanent base for Japan’s Self Defense Forces as Tokyo looks to strengthen its position along the East China Sea, where it faces competing claims from China over the Japanese-administered Senkaku islands, known as the Diaoyu islands in Chinese.

The “purchase of Mageshima Island is extremely important and serves for strengthening deterrence by the Japan-US alliance as well as Japan’s defense capability,” Japanese Chief Cabinet Secretary Yoshihide Suga said in announcing the deal.

The U.S. is currently focused on dispersing and hardening its military facilities, especially air bases and hangers throughout the Pacific region. Those in Japan are especially vulnerable.

The majority of US combat air forces in Japan are concentrated in just six bases.

Recent studies, including one from the United States Study Center at the University of Sydney published in August, say with their current resources the US forces would be vulnerable to Chinese missile strikes early in any conflict.

Corey Wallace, an Asia security analyst at Freie University in Berlin notes that: “Over time, the diversification of Japanese and American bases (individual or joint) will be a trend. The alliance would be more resilient if bases and hardware were more dispersed.”

USNI News reports that Japan’s 2022 defense budget has just allocated $2.7 billion for the development of Mageshima Island into a base for U.S. aircraft.

Adding to Japan’s capabilities in the region, the 2022 budget funds also plans to place a military garrison of 500 to 600 troops on Ishigaki Island, which is about 186 miles away from Taiwan.

The garrison will operate ground-based surface to air missiles and anti-ship missile systems, much to the chagrin of communist China.

A Defense Ministry official explained the rush behind the recent decision to go full speed ahead on building the Mageshima Island base.

“It’s a race against time when it comes to national security,” the official said. “We need to construct the SDF facility on the island as soon as possible to strengthen our country’s defense capabilities and the Japan-U.S. alliance.” ADN