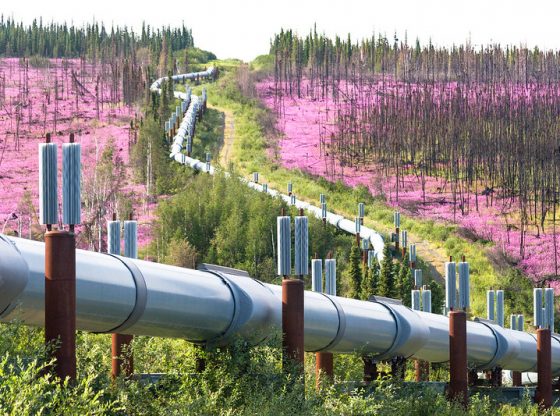 Fireweed blooms on either side of the trans-Alaska pipeline near mile post 86, Dalton Highway, two years after the 2004 Dall City fire. Photo by Craig McCaa/BLM Alaska. / Photo via Flickr

ANALYSIS – With the Ukraine crisis ongoing, and few non-military options available as leverage against Putin, the State Department on Thursday warned that if Russia invades Ukraine the Nord Stream 2 natural gas pipeline from Russia to Europe will sit unused at the bottom of the ocean.

This solution is something that former President Trump and eastern European allies such as Poland would be very happy with since they have long argued the pipeline would make Europe even more energy dependent on Russia who can turn off or reduce the flow at any time.

And Trump was right. Russia is now doing just that.

As Russia’s tanks and troops are amassing at Ukraine’s borders, Moscow has reduced the amount of natural gas flowing into the heart of Europe. It is delivering enough to keep power plants and factories humming and ensure that European homes can fend off the chilly January gloom — but not enough to prevent prices from soaring to record levels.

In a bid to stop the new pipeline and the increased dependence it will bring, Trump implemented sanctions against companies involved in constructing the pipeline in 2019. The bill signed by Trump described the pipeline as a “tool of coercion.”

The controversial pipeline from Russian oil giant Gazprom goes through Germany under the Baltic Sea — bypassing an existing pipeline that runs into Ukraine. It has been completed but is yet to be tested or certified for use.

Holding up the required regulatory processes for starting the pipeline use can still be an effective way to block it.

Fox News reported that U.S. Under Secretary for Political Affairs Victoria Nuland said: “If Russia invades Ukraine, one way or another, Nord Stream 2 will not move forward.”

“As Sen. Cruz likes to say, ‘It is currently a hunk of metal at the bottom of the ocean’,” she added. “No gas will flow through it until those things happen.”

While some question whether Germany would agree with such a drastic step, German Foreign Minister Annalena Baerbock told parliament Thursday: “We are working on a strong package of sanctions,” noting that the Nord Stream 2 pipeline was just one of the economic areas of interest, reported Radio Free Europe.

Following Trump’s lead and quoting Senator Ted Cruz, while pressuring a dithering Germany, all in one sitting is quite a feat for Team Biden. Perhaps it will continue to see Trump was right on many more national security policies. ADN

I am just so certain that Russia is quaking in their boots as they march toward Ukraine. Boy, old Father Frats told them didn’t he?