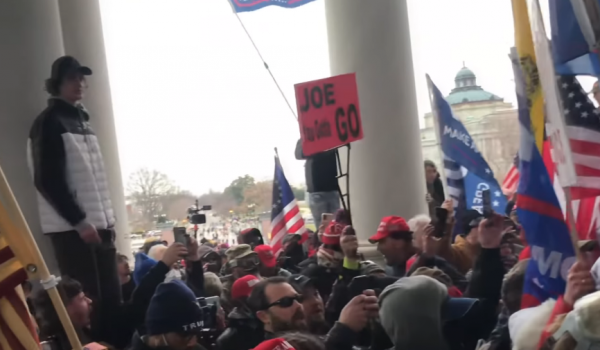 While there is considerable evidence of violent pro-Trump rioters breaking windows and viciously assaulting police officers at the Capitol on January 6, 2021, there has always been a question about the main Columbus Doors to the Capitol Rotunda being opened from the inside.

As part of the case involving Kelly Meggs and other members of the Oath Keepers charged, among other things, with breaching the Capitol using a ‘tactical stack’ military formation, defense attorneys argue it was impossible to break into the Capitol at those massive 17 foot-high doors.

The Epoch Times (ET) reports that defense attorney Jonathon Moseley wrote in an eight-page memo to federal prosecutors that “the 20,000-pound Columbus Doors that lead into the Rotunda on the east side of the U.S. Capitol are secured by magnetic locks that can only be opened from the inside using a security code controlled by Capitol Police.”

Only Capitol Police could open those massive doors.

Yet, the federal indictment accuses the defendants of “breaching” the Rotunda entrance around 2:39 p.m. on January 6.

The outer doors cast from solid bronze would require a bazooka, an artillery shell or C4 military-grade explosives to breach. That of course did not happen. You would sooner break into a bank vault than to break the bronze outer Columbus Doors.

Moseley said he and an assistant took a tour of the Capitol on Jan. 22, along with other attorneys and investigators. The U.S. Capitol Police officers on duty were emphatic, he said, that the doors could not be opened from the outside.

… video from outside the entrance shows a group of Oath Keepers near the Columbus Doors, which are clearly open at the time the men got near the threshold. By the time they entered the Capitol, dozens if not more than 100 people had flowed into the building, the video shows.

According to ET, “Moseley proposed a stipulation that both sides in the case agree none of the demonstrators or the defendants opened the Columbus Doors on Jan. 6 and that the government strike three paragraphs of the indictment that refer to defendants entering the Capitol because they are “untrue and withdrawn.” Prosecutors refused that proposal, he said.”

Mosley also savaged federal prosecutors for holding back vital information and “dishonestly trying to deceive the public” for eight months by concealing that a total of six permits had been issued for demonstrations at the Capitol grounds on Jan. 6.

He explains that those permits implicitly give permission for people to enter, exit and cross the Capitol grounds to reach each event.

Altogether, Moseley accused prosecutors of crafting a “fabricated case” against the Oath Keepers that is “false and reprehensible.” He added: