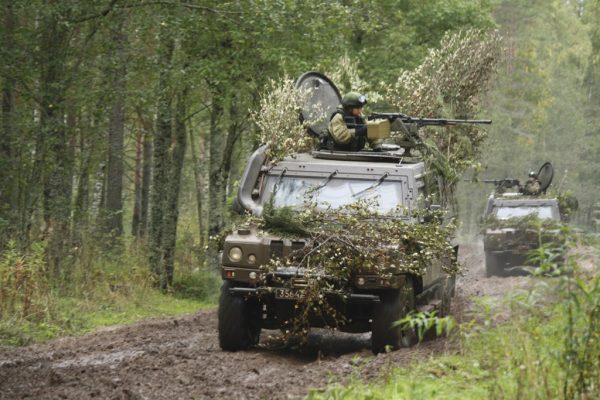 Conducting reconnaissance of the areas of upcoming combat training by units of the Russian Airborne Forces within the framework of the joint strategic exercise/ Ministry of Defence of the Russian Federation - Mil.ru via (https://creativecommons.org/licenses/by/4.0/deed.en) Wikipedia Commons
Tweet
Share
Email

Vladimir Putin’s recent threat to put the “Russian Army [nuclear] Deterrence Force on combat alert,” shocked many in the west, and that was his intention. However, the term Putin used has analysts scratching their heads.

No one is quite sure what ‘combat alert’ means in practical terms. More on that issue in another ADN piece to come.

However, most have agreed that while Putin’s order – which applies to Russia’s strategic, non-strategic (smaller tactical weapons) as well as its new hypersonic nuclear missiles – is concerning, it does not mean Putin is immediately preparing for a nuclear strike.

What we do know is that Putin is reminding everyone that Russia has nuclear weapons – and lots of them. As a matter of fact, Russia has more nukes than anyone else, including the United States.

And Russian doctrine allows for them to be used in conventional war.

According to the Bulletin of the Atomic Scientists, Russia has a nuclear warhead inventory of 5,977 – the largest atomic arsenal in the world. The U.S. has 5,428 warheads while China has 350, France has 290 and Britain has 225.

In addition, Russia has another 1,912 ‘non-strategic’ warheads in reserve as well. And as The Heritage Foundation notes, these should be far more concerning than the strategic nukes in this Ukraine war scenario. Especially since the U.S. and NATO don’t really have many tactical nukes left in their arsenal. 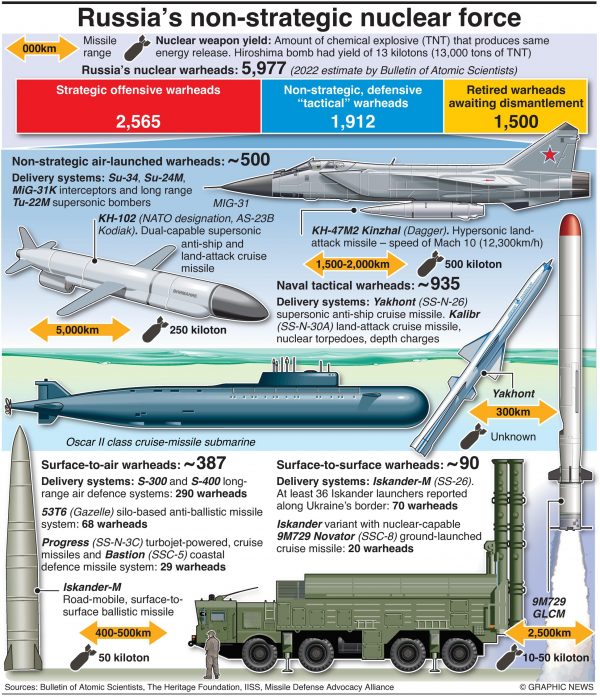 Strategic nuclear weapons include intercontinental ballistic missiles (ICBMs) on land and Submarine Launched Ballistic Missiles (SLBMs) at sea, and those on long-range bombers, which can hit targets globally.

Meanwhile, tactical nuclear weapons refer to those deployed on a battlefield. Russia’s tactical weapons have yields ranging from 10 kilotons to 500 kilotons. In contrast, most current strategic nuke warheads are in the hundreds of kiloton range, and the Hiroshima bomb yielded 13 kilotons (13,000 tons of TNT).

Significantly, according to Russia’s nuclear deterrent doctrine, endorsed by Putin in June 2020, the Kremlin “reserves the right to use nuclear weapons,” including tactical weapons in a conventional conflict to force the enemy to back down. Also known in Russian doctrine as ‘escalating to de-escalate.’

This means Russia believes it is useful militarily to use tactical nuclear weapons to manage a conventional war.

While Russia has nearly 2,000 tactical nukes and the U.S and NATO do not have many tactical nuclear weapons anymore, Putin has long complained about the approximately 100 air-droppable nuclear weapons still stored in Europe at NATO bases in Italy, Germany, Turkey, Belgium and the Netherlands.

These US weapons are believed also to be in ‘reserve’ and stored underground. They would need to be loaded onto NATO jet fighters for use against Russia. But as NATO has expanded, Putin has repeatedly expressed his concern that the U.S. could place other nuclear weapons in NATO countries farther east, closer to Russia.

Ironically, Putin’s reckless and belligerent actions may be provoking NATO to reconsider what it had previously discarded: having more of its own tactical nukes in Europe. ADN

[…] As ADN has noted previously, Russia’s nuclear weapons doctrine calls for ‘escalation to de-escalate,’ or using some nukes to prevent the use of more. […]

[…] as ADN reported earlier, the U.S. doesn’t have the tactical nuclear weapons Russia has, making deterrence in this […]

[…] the risk of ‘Vlad the Invader’ Putin choosing to use tactical nukes to ensure victory. As ADN has reported Russia has far more tactical nuclear weapons than the U.S. or NATO, and Russian nuclear doctrine […]

Pushing for a NATO-Ukrainian 'No-Fly Zone'? - Know What You Are Asking For - American Liberty News

[…] fact that Putin’s Russia likely has the world’s largest nuclear force. Not only that, but as explained earlier in ADN, they have a large number of tactical nukes that NATO really doesn’t […]