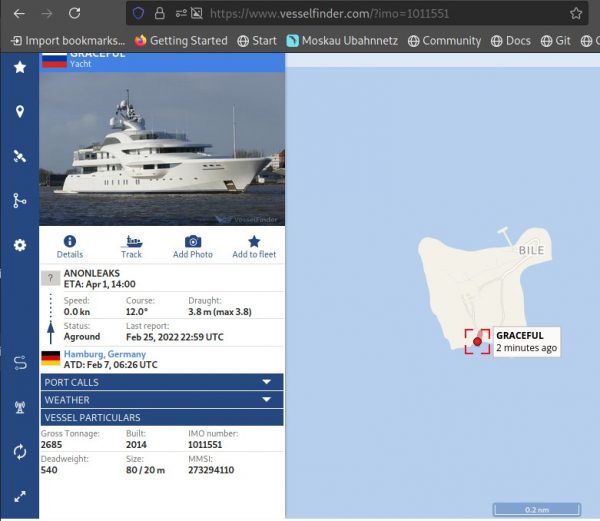 The group, which has pledged to support Ukraine and has attacked Russian state broadcaster RT – also initially changed the boat’s location information to make it appear to have crashed into Snake Island in Ukraine.

The hackers later changed its destination to “hell.”

Putin’s super yacht has an indoor pool, spa, dancefloor, gym, bar, and a helipad. On another website Vesseltracker, the callsign of Putin’s yacht is still set to “ANONYMO.”

The Independent reported that:

The hackers also said this was “not an operation against the people of Russia. It’s not even one against Russian soldiers. The operation targets Putin and the Putin-controlled state apparatus, state-owned companies, the state-controlled media, and individuals and private companies that have benefited from Putin’s autocratic system for decades.”

“It is also directed against groups and media that carry Putin’s gaslighting abroad. Putin, who is using hacker squads and troll armies against Western democracies, is getting a sip of his own bitter medicine.”

To make these changes Anonymous had to hack the “Automatic Identification System” (AIS) used to track ship locations worldwide.

Putin’s yacht abruptly left Hamburg on February 9 before finishing repairs, according to German media, to avoid Western sanctions prior to Russia invading Ukraine.

The hackers said on a German Twitter account, according to Bloomberg reporter Ryan Gallagher, that they  “wanted to put the yacht in the scope of sanction packages as well as ‘put a little smile on some faces for a short period in these dark times.’

Admitting the limited impact of their hacking, ‘Anonymous’ says their intention is to keep Russia’s cyber warriors on defense to restrain their ability to go on offense against Ukraine or NATO. ADN