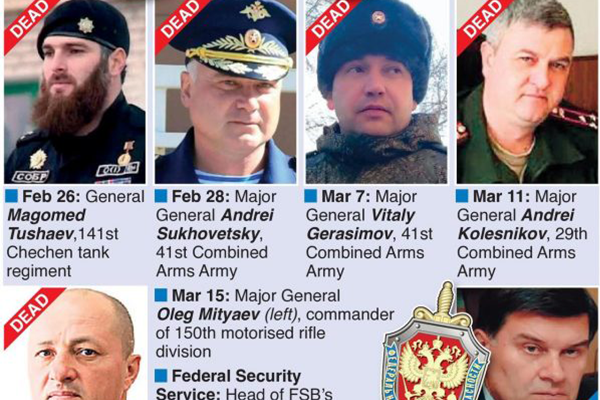 Ukrainian forces have reportedly killed a fifth Russian general this week during the brutal but slow-moving war launched by Vlad the Invader Putin on February 24. Maj. Gen. Oleg Mityaev, the commander of the 150th motorized rifle division, was killed Tuesday during the storming of the southern city of Mariupol, according to Interior Ministry adviser Anton Gerashchenko.

He later posted a photo of the body as proof, stating that Mityaev was “one of the most promising and iconic Russian military leaders,” claimed Gerashchenko, as he celebrated “the liquidation of the general.”

“This is a serious blow to the morale of Russian commanders. And the huge success of the Heroes of Mariupol,” Gerashchenko wrote. And this isn’t hyperbole.

While a Russian major general equates to a brigadier general in the U.S. military, the high number of Russian generals, including one loyalist Chechen, killed in less than three weeks of fighting is unheard of in modern combat. 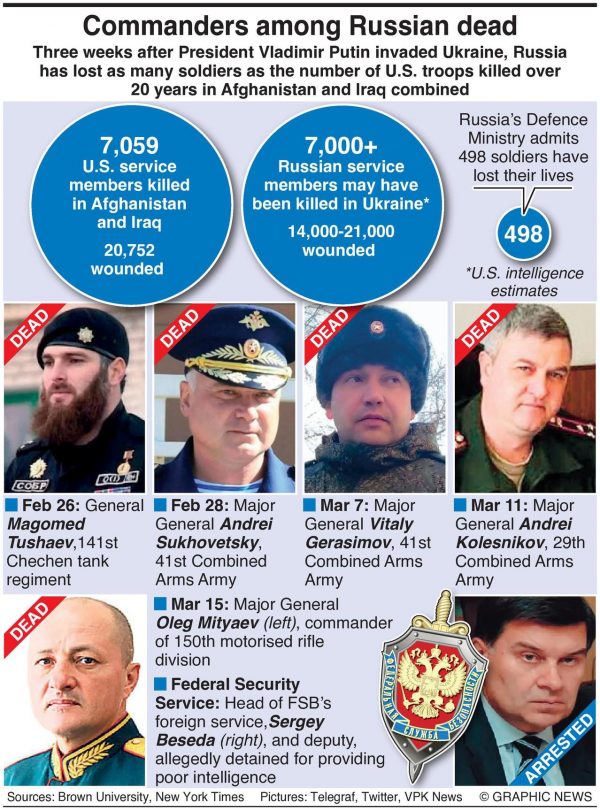 Within four days of the launch of the invasion, Putin had lost two generals — Chechen warlord Magomed Tushaev, of the 141st Schechen tank regiment, and Major General Andrei Sukhovetsky of the 41st Combined Arms Army. Sukhovetsky was killed by sniper fire.

In contrast, the Soviet Union only lost four generals during the decade that they fought to subdue Afghanistan (1979 to 1989). Russia has surpassed that number of dead generals within just the first 20 days of invading Ukraine.

Russian forces are notoriously top heavy, and despite recent reforms to the contrary, rarely allow unit commanders latitude for initiative.

This may explain why senior commanders are reportedly moving to the front lines in an attempt to restore momentum to the faltering invasion according to western officials, said Gordon Corera, a BBC security correspondent.

“Those commanders are trying to impose their own personality on the battlefield but this, in turn, is placing them at greater risk,” said Corera, as reported by Insider.

However, these deaths also show myriad other flaws in Russian combat operations, including poor coordination, poor security, and poor communication.

The New York Times reported that:

Russian generals are talking on unsecured phones and radios. In at least one instance, they said, the Ukrainians intercepted a general’s call, geolocated it, and attacked his location, killing him and his staff.

It is estimated that 20 Russian generals are deployed in Ukraine to command Russian troops fighting there. If so, the five killed represent fully one quarter of the complement of front-line generals in the war zone.

Beyond these unit commanders, conservative estimates place the overall number of Russian troops lost in 20 days at over 7,000. This is comparable to the American military casualties in Afghanistan and Iraq COMBINED in 20 YEARS.

And so far there have been no reports of any senior Ukrainian officers, or generals killed.

So, yes. This is kind of a big deal. ADN