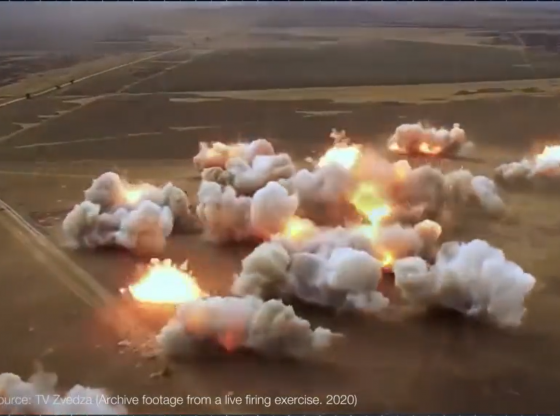 In an earlier ADN piece, ‘Is Putin Deploying Brutal Thermobaric Flame Throwing Rocket Launchers to Ukraine?,’ we noted that there were reports that “Russian troops are using thermobaric (fuel-air explosive) weapons which could include the fearsome TOS-1 ‘Blazing Sun’ multiple rocket launcher.”

“Thermobaric weapons, also known as vacuum bombs, which suck up oxygen at ground level, creating a partial vacuum suffocating those in the blast zone, are also capable of vaporizing human bodies and crushing internal organs.”

ADN added that there were reports that TOS-1s, also known as ‘Buratino,’ had been seen heading for the Ukrainian border, even providing a tweet of a video of the weapons on trucks en route to Ukraine.

The russian army has deployed the TOS-1 heavy flamethrower which shoots thermobaric rockets, the was South of Belgorod. pic.twitter.com/XCxMI3bNB3 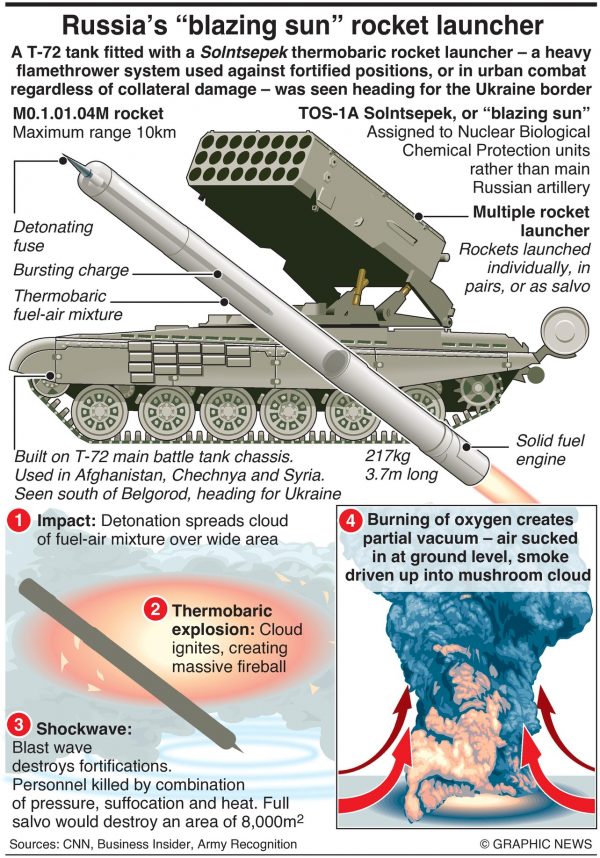 Still, some pushed back, saying that despite the reports, there was no hard evidence the Russian had used them in combat. That point is now moot as Russia has admitted to using thermobaric bombs in its attacks on Ukraine, according to a tweet from the U.K.’s Ministry of Defense (MoD).

Russian MoD has confirmed the use of the TOS-1A weapon system in Ukraine. The TOS-1A uses thermobaric rockets, creating incendiary and blast effects.

In a video accompanying the tweet, the MoD said:

The impact of the TOS-1A is devastating. It can destroy infrastructure, and cause significant damage to internal organs and flash burns, resulting in death to those exposed.

The Russian MoD has confirmed the use of the TOS-1A weapon system in Ukraine. The TOS-1A uses thermobaric rockets, creating incendiary and blast effects.

Watch the video below for more information about this weapon and its devastating impact.

Despite the Russian admission, it still isn’t clear how these devastating weapons— which are illegal when used against civilians—are currently being used in the war.

The use of thermobaric weapons is not banned but is heavily regulated under international law. Use against civilians, or military targets that could endanger the civilian population, is banned under the Geneva Convention. It’s believed Russia used thermobaric weapons in its campaign against the Chechen capital Grozny in late 1999 and early 2000, and also in Syria. Russian-backed separatists in the Donbas region have also been accused of using thermobaric weapons since declaring independence from Ukraine in 2014. ADN

Got to ID launch sites & take out ASAP