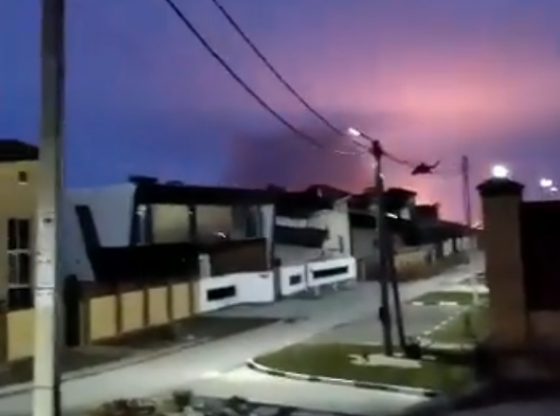 In what could be the first Ukrainian attack on a target inside Russia, Moscow is claiming Ukraine struck a fuel depot in the Russian city of Belgorod, 25 miles north of the Ukrainian border.

This would be a significant move by Ukraine as Russian forces have been laying waste to Ukraine for weeks without any meaningful retribution inside Russia.

Despite a lack of independent confirmation, or official statement from Ukraine, footage posted on social media showed what appeared to be multiple rocket attacks from helicopters followed by a massive explosion, while another video showed an Mi-24 attack helicopter flying away at very low level over rooftops from the scene of the strike.

CCTV footage showing the attack on the oil depot in Belgorod. In the video you can see 2 Mi-24 firing S-8 rockets at the depot. The first misses the target, but the second one hits oil storage at the depot causing the fire.

CCTV footage showing the attack on the oil depot in Belgorod. In the video you can see 2 Mi-24 firing S-8 rockets at the depot. The first misses the target, but the second one hits oil storage at the depot causing the fire. pic.twitter.com/ACZYD8b9qa

“I can neither confirm nor reject the claim that Ukraine was involved in this simply because I do not possess all the military information,” Kuleba said at a briefing in Warsaw, Poland.

In what is an almost comical response considering Russia’s brutal actions inside Ukraine, Kremlin spokesperson Dmitry Peskov said the strike, which Ukraine has neither confirmed nor denied, was unhelpful and could jeopardize peace talks.

“Clearly, it’s not what could create conditions for further talks,” he said, according to Russian state-backed media Tass. ADN

Ukraine Helicopters, if it was theirs for sure, hit the Russians right where it hurts. Fuel storage tanks…. Russia has been hammering Ukraine for days now and watch them try to accuse Ukraine of something….. Just watch….

After all that Russia has put the people and nation of Ukraine thru, they deserve a taste of their own medicine. I say “go for it Ukraine”.

Isn’t Karma wonderful at times! And just think Ukraine gave up all of its Nukes for peace when they became independent in 1994.

[…] Ukrainian helicopters raid oil depot in Russian city: reports. A pair of Ukraine’s Mi-24 “Hind” helicopters have reportedly made a daring raid more than 20 miles into Russia, destroying an oil depot in the southern city of Belgorod on Friday, according to Russian officials and open source reports. […]