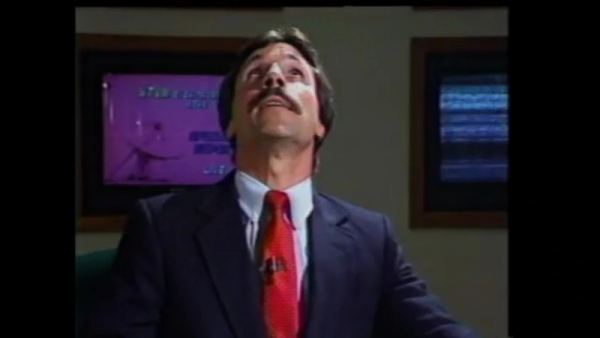 What if a terrorists attacked a major U.S. city with one or more nuclear devices?

Well, thankfully, it hasn’t happened yet, but at the height of the Cold War, in 1986, the U.S. government conducted a nuclear terror attack simulation exercise in Indianapolis, Indiana code-named ‘Mighty Derringer.’

And as part of that simulation, it even produced a highly realistic training video of a fake news broadcast showing how an attack might develop live on local TV news.

And until now, no one outside of the U.S. government had seen the video.

But Gizmodo has obtained the ‘Mighty Derringer‘ footage from the National Nuclear Security Administration (NNSA) through a Freedom of Information Act (FOIA).

In the video, ersatz anchorman, “Jeff Schwartz,” of the fake “Channel 9 Eyewitness News,” tells viewers that it is now day four of an emergency in downtown Indianapolis.

“You know that few details are available, but this much we know,” Schwartz says, looking into the camera.

“A large portion of downtown Indianapolis remains evacuated. Now, reports are sketchy at this point, but we do know that apparently there are terrorists holed up in the downtown part of our city with nuclear devices.”

Schwartz says nuclear experts from the federal government have arrived in Indianapolis and that “a federal response team has been sent in to neutralize the threat.”

He then goes to a reporter in a helicopter, “Anne Miller.”

Watch what happens next in the chilling video linked below:

According to a document obtained by Jeffrey T. Richelson who wrote the book, ‘Defusing Armageddon: Inside NEST, America’s Secret Nuclear Bomb Squad,’ over 400 “players and controllers” from the FBI, Department of Energy, Department of Defense (and Explosive Ordinance Disposal), FEMA and state and local law enforcement toom part in the drill.

The training was apparently led by the Department of Energy’s NNSA.

But FEMA (Federal Emergency Management Agency) was likely critical as well since it had been created shortly after the 1979 nuclear disaster at Three Mile Island in Pennsylvania to coordinate the federal response to a disaster in the U.S. that overwhelms local and state authorities.

The team’s mission remains to deploy a group of experts to anywhere in the country at very short notice in response to any nuclear threats.

NEST also deploys surveillance vehicles, helicopters, and other special equipment to sweep for  radioactive material as a preventive measure at major public events.

And ‘Mighty Derringer‘ was a major exercise to test NEST’s capabilities and explore how FEMA and every other federal agency would react and cooperate.

Real “nuclear sources” were actually hidden in parts of Indianapolis during ‘Mighty Derringer’ so that the team would have something to look for, Richelson wrote in his book.

In the simulation, the response teams located and defused one nuke, but Indianapolis was still hit by a second device:

a “1 kiloton nuclear detonation that resulted in ‘total devastation over a 20 square block area,'” according to the National Security Archive.

Inside The US Governments Secret Nuclear Terror Training - True Daily