As reported earlier by ADN, a new security agreement between China and the Solomon Islands could put the communist superpower on the doorstep of Australia and New Zealand and also nearer to Guam, with its strategic U.S. military bases in the Western Pacific.

But this latest pact is also part of China’s far-reaching global plan.

The Solomon Islands government says a draft of its agreement with China was finalized last week and will be “cleaned up” and signed soon.

The government has also said the pact is necessary because of its limited ability to deal with violent uprisings like the one in November.

However, The Solomon Islands government’s recent alignment with Communist China provoked that civil unrest.  As ADN reported in Dec 2021:

The 2019 decision by the Solomon Islands government of Prime Minister Manasseh Sogavare to switch diplomatic allegiances from Taiwan to the People’s Republic of China (PRC) sparked widespread disapproval and recent civil unrest in the strategic Pacific island nation ostensibly allied to the United States and Australia.

This prompted Sogavare’s besieged government to seek outside help with Australia initially responding with over 100 troops and police. But Sogavare later accepted Beijing’s offer of assistance to strengthen its anti-riot policing capabilities, which then led to this new agreement.

And despite the denials,  this agreement opens the door for an expanded Chinese military presence on the strategic islands east of Papua New Guinea and northwest of Australia.

A draft official document – which emerged on social media on Thursday – lays down a framework which could permit Beijing to deploy forces to “protect the safety of Chinese personnel and major projects in Solomon Islands”.

The agreement says Solomon Islands may “request China to send police, armed police, military personnel and other law enforcement and armed forces” to the country.

It also states that China’s government may “make ship visits, to carry out logistical replenishment in, and have stopover and transition in Solomon Islands”.

While both China and the Solomons have strongly denied the new pact will lead to the establishment of a Chinese military base, experts see this is part of China’s ambition to create a global stealth network of military installations.

As the AP reports:

China so far operates just one acknowledged foreign military base, in the impoverished but strategically important Horn of Africa nation of Djibouti. Many believe that China’s People’s Liberation Army is busy establishing an overseas military network, even if they don’t use the term “base.” 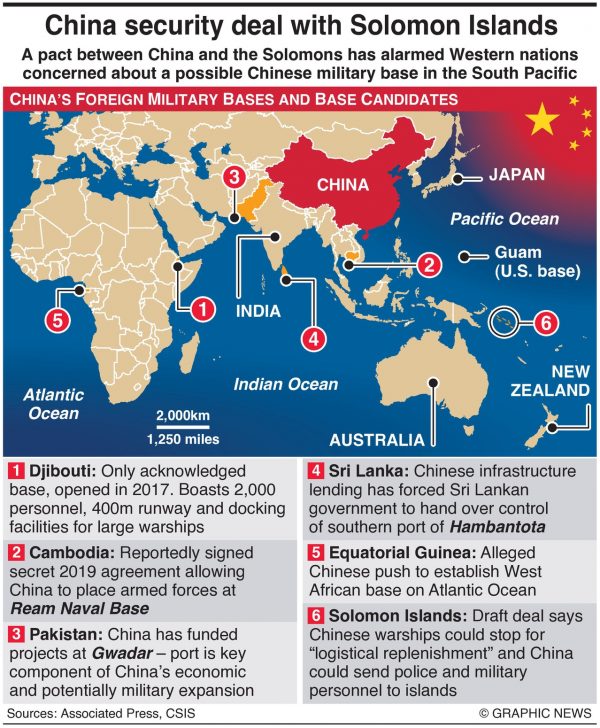 China’s base in Djibouti was opened in 2017. China doesn’t call it a base, but rather a support facility for its naval operations fending off piracy in the Gulf of Aden and for its African peacekeeping operations. It boasts a 400-meter (1,300-foot) runway and a pier big enough to dock either of China’s two operating aircraft carriers.

But there are several more Chinese military ‘non-bases’ on the way worldwide. AP explains:

…Chief among other potential base candidates is Cambodia, whose authoritarian leader Hun Sen has long been a trusted Chinese ally and which reportedly signed a secret 2019 agreement permitting the establishment of a Chinese base.

China is dredging the harbor at Ream Naval Base to allow ships larger than any Cambodia possesses to dock, and is building new infrastructure to replace a U.S.-built naval tactical headquarters. A Chinese base in Cambodia would establish a chokepoint in the Gulf of Thailand close to the crucial Malacca Strait.

China has also funded projects at Gwadar in Pakistan, another close ally, and in Sri Lanka, where Chinese infrastructure lending has forced the government to hand over control of the southern port of Hambantota.

Especially intriguing has been an alleged Chinese push to establish a base in the West African nation of Equatorial Guinea. That would give China a presence on the Atlantic opposite the east coast of the continental United States as well as in an important African oil-producing region. ADN