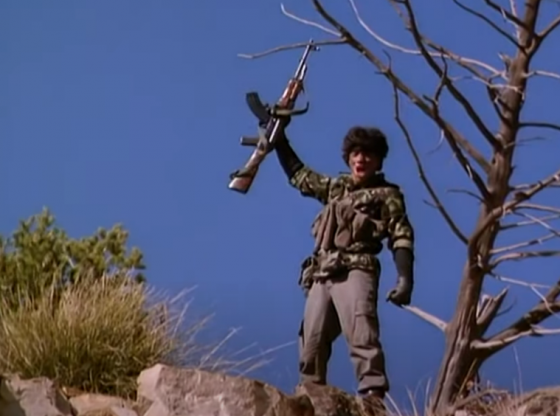 In the 1984 Cold War movie Red Dawn – as Soviet troops battled their own real insurgency in Afghanistan – characters played by Patrick Swayze, Charlie Sheen, and Jennifer Grey lead a guerrilla band of high school students from a small town in Colorado to fight a fictional Russian invasion of the United States.

Their battle cry, like their school team’s vicious little mascot was – ‘Wolverines,’ and they would leave their Wolverines tag whenever they would strike the Soviet Russian invaders.

And now, in a perfect case of life imitating art, that same tag is increasingly showing up on destroyed Russian vehicles in Ukraine as the movie inspires Ukrainians to resist their own Russian invaders.

In one case we see what appears to be a burned-out BTR-80 armored personnel carrier, near Brovary, a suburb of Kyiv.

In another we see a destroyed T-72 tank with “Wolverines” painted on the side of the turret.

One study showed the 1984 movie has seen a 500% surge in video-on-demand worldwide since the Russians invaded Ukraine in late February.

It’s unclear if Ukrainian soldiers or local civilians are tagging these destroyed Russian vehicles, but what is clear is that ‘Wolverines’ is spreading like wildfire throughout Ukraine and appearing all over Russian vehicles.

As Red Dawn makes clear, and their own occupation of Afghanistan should have also taught the Russians, occupations breed insurgencies, and they often end badly for the invaders. As Task and Purpose notes:

…insurgencies are nearly impossible to defeat with conventional military means. Every citizen is a potential combatant, and fighters blend seamlessly into the populace. They have an inherent home-field advantage, not just through a deep personal knowledge of the terrain, but of the people and culture. As such, they also tend to enjoy considerable local support.

This was the case in the fictional Colorado town where the young insurgents defeat a powerful Russian military force and will also likely be the case if the Russians attempt to occupy parts of Ukraine.

While Red Dawn was roundly bashed at the time by the left for its strong patriotic appeal, that criticism hasn’t aged well. It is clear that patriotism and resistance to foreign invaders is a universal phenomenon that deserves our praise. ADN

WEDNESDAY PDB – Will EU or NATO Lead Europe’s Defense? Veto for UN Security Council Members Questioned, Russia Has Lost 25% of its Ukraine Combat Power, Mexico Shuts Elite Counter Drug Unit with Ties to US
An Old Enemy or a New One? Debate Rages over Affiliation of ‘Nigerian Bandits’