Alec Baldwin speaking at the 2016 San Diego Comic Con International, for "The Boss Baby", at the San Diego Convention Center in San Diego, California. / Photo by Gage Skidmore via Flickr

It has been six months since outspoken liberal actor Alec Baldwin fatally shot cinematographer Halyna Hutchins on the set of his low-budget western “Rust.” As I noted earlier, while Baldwin may not be charged with manslaughter, he fired the old west revolver and as a producer, it was his movie.

It was also widely reported, as I wrote about here, that basic safety precautions on the set were not being followed, even provoking a walk-out by some crew members. And Baldwin was using a young inexperienced gun armorer, usually responsible for gun safety on movie sets.

On April 10, 2022, the producers, including Baldwin, were fined $136,793 by New Mexico Occupational Health and Safety Bureau, who said “management knew that firearm safety procedures were not being followed on set and demonstrated plain indifference to employee safety.”

But the most important question is still being investigated – why was there a live round on a movie set?

This is something I noted actor George Clooney rightly said, was ‘insane.”

Criminal investigations by Santa Fe County Sheriff’s Office and the First Judicial District Attorney are awaiting completion of an FBI ballistics report and other evidence before they can determine how a live round ended up in a movie prop revolver.

It is no surprise then that since the accidental shooting several key players have filed lawsuits against producers and crew. 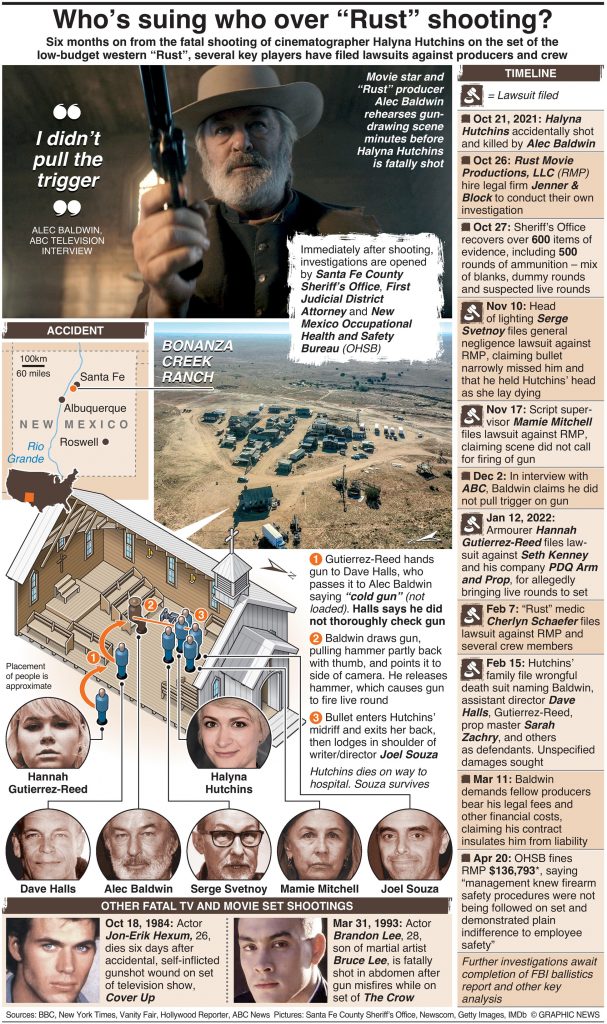 The shooting happened on October 21, 2021, while rehearsing a scene inside a wooden chapel on Bonanza Creek Ranch in New Mexico – a popular western location seen in the likes of Jimmy Stewart’s 1955 “The Man from Laramie” and Paul Newman and Robert Redford’s 1969 “Butch Cassidy and the Sundance Kid.”

As the crew worked out positions for the scene, Baldwin, playing a grizzled 1880s Kansas outlaw, inadvertently fired a live round from an Italian-made Pietta Long Colt revolver replica – the bullet passing through Hutchins’ chest and lodging in director Joel Souza’s shoulder.

Hutchins died in flight to the University of New Mexico Hospital in Albuquerque, while Souza was later discharged from the hospital. ADN