Guerrilla Groups in Myanmar Turn to Assassinations to Fight Dictatorship

Guerrilla Groups in Myanmar Turn to Assassinations to Fight Dictatorship 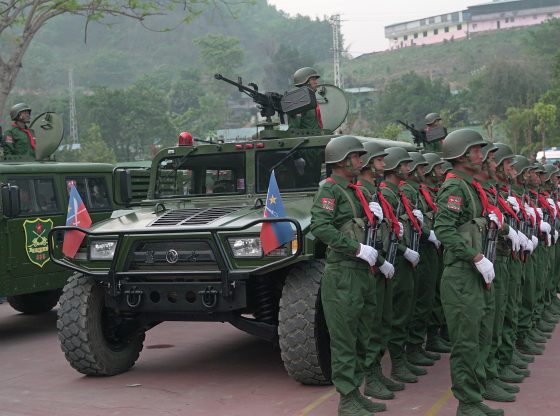 Soldiers of the Myanmar Military at attention during a parade. Photo By Steve Sandford
Advertisement
Draft DeSantis for 2024! [CLICK HERE]

Across Myanmar, assassinations have become a regular tool of the resistance. More than 400 local armed groups like the Nga Pyae Ma have formed since the coup; many carry out targeted killings for which they later claim responsibility. The assassinations come as the movement to restore democracy has evolved into deadly warfare between a ruthless, well-supplied military known as the Tatmadaw and a resistance movement that has broad public support but limited weaponry.

The shadow National Unity Government, which was formed by ousted elected officials and some ethnic leaders, says it is waging a revolutionary war against the regime. The conflict has taken a huge toll on the civilian population. Nearly a million people have been displaced, the economy has contracted sharply and the health care system is in crisis, even as the military blocks delivery of humanitarian aid.

U Naing Htoo Aung, the unity government’s defense ministry secretary, said that ward administrators are legitimate targets because they engage in “the surveillance and coercion of the public” and are essential to the regime’s “dictatorial control of the country.”

The unity government’s People’s Defense Force has more than 60,000 fighters organized into battalions, he said, and a similar number make up local resistance groups such as the Nga Pyae Ma. The organized battalions are mainly engaged in fighting the Tatmadaw in the jungles, while the resistance groups operate in towns and cities, where they carry out guerrilla attacks.

FRIDAY PDB – US Has…