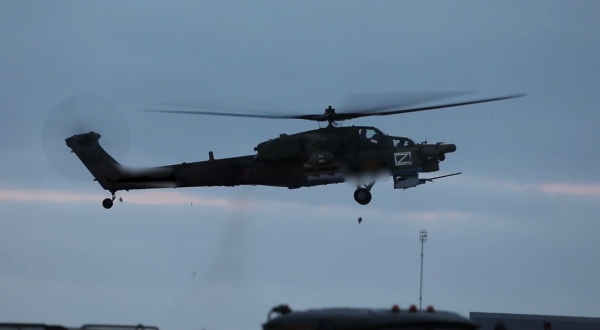 A Russian KA-52 Attack Helicopter During the Invasion of Ukraine. Photo by By Mil.ru
Tweet
Share
Email

WITCH HUNT OR REAL THREAT? – Proud Boys leader, four lieutenants charged with seditious conspiracy. The new charges suggest investigators are stitching together a wider picture of organization within extremist groups that shared common if not overlapping goals in the January 2021 Capitol attack.

BIDEN’S BORDER CRISIS – Even the National Guard won’t be enough to solve border crisis when Title 42 ends. The simple fact is the Title 42 order — instituted in 2020 as part of the previous administration’s pandemic response — will be terminated eventually.

MIGRANT SURGE – MORE OF BIDEN’S BORDER CRISIS – US-bound migrant caravan leaves southern Mexico. Several thousand migrants have set out from southern Mexico in a caravan bound for the United States, which is hoping to address regional migration during talks at the Summit of the Americas this week in Los Angeles.

GROWING NETWORK OF BASES – China secretly building PLA naval facility in Cambodia, Western officials say. The establishment of a Chinese naval base in Cambodia — only its second such overseas outpost and its first in the strategically significant Indo-Pacific region — is part of Beijing’s strategy to build a network of military facilities around the world in support of its aspirations to become a true global power, the officials said.

YES PLEASE – Japan calls for defense spending hike in policy paper, notes threats to Taiwan. Japan wants to drastically increase defense spending “within the next five years” it said on Tuesday in an annual economic policy document that for the first time mentioned both a time frame for the expenditure and concern about threats faced by Taiwan.

ISLAND HOPPERS – New Marine littoral regiment will make debut in this year’s RIMPAC drills. Marines with 3rd Marine Littoral Regiment will join ground forces along with a fleet of ships, submarines, and aircraft from 26 countries for this year’s multinational Rim of the Pacific maritime exercise off Hawaii, officials told USNI News.

Russia-Ukraine war: List of key events, day 104. Zelenskyy says his country’s forces are not giving up positions in Severodonetsk, the main Donbas city not in Russian hands, where street fighting is raging. He did, however, admit that Russian forces had a numerical advantage in the battle. On Monday morning, Russian forces shelled the town of Zolote, destroying 13 houses, Luhansk Governor Serhiy Haidai said.

Ukraine’s position has ‘worsened’ in fight for Severodonetsk. Russian forces have been expanding their footprint in the city, though Ukrainian troops remain in control of its industrial zone.

Fighting rages in fierce battle for Ukraine’s east. Street fighting between Ukrainian and Russian troops raged in the battle for the industrial city of Sievierodonetsk as Moscow’s forces pushed to conquer Ukraine’s eastern Donbas, seeking a decisive win more than 100 days into the invasion.

WOLVERINES! – Guerrilla attacks signal rising resistance to Russian occupation. The Kremlin-backed mayor of the Ukrainian town of Enerhodar was standing on his mother’s porch when a powerful blast struck, leaving him critically wounded. A week later, about 75 miles away, a car packed with explosives rocked the office of another Russian-appointed official in the occupied southern city of Melitopol.

South Korea, US showcase air power during US official’s Seoul visit. South Korea and the United States staged a joint air power demonstration on Tuesday during a visit by U.S. Deputy Secretary of State Wendy Sherman, who said there would be a strong and clear response if North Korea were to conduct a nuclear test.

The US is bombing al-Shabaab in Somalia, again. The airstrike happened two weeks after the Pentagon said it was sending troops back to the country.

Marines closing down Kuwait gear stockpile to focus on Pacific. The Marine Corps is shuttering its combat gear storage program in the Middle East.